In 1980, AFC Leopards SC won the top national football league in Kenya after a six year drought. By the time the team secured the title, they had been unbeaten and went on to lose the matches that were perhaps meaningless in the scheme of where the title was headed.

Leopards (then known as Abaluhya Football Club) were a resurgent team having been crowned the East and Central Africa Club Champions and they felt that since they were the regional kings, they could secure the league title as there was no point in beating the best in East and Central Africa and not winning the local title. The last time the Leopards had been champions was in 1973.

The top two standings at the end of the season were:-

Leopards clinched the title with five games to go. As they had become the first side to ever win the league that early in the year, this feat earned them the Guinness Stout Effort Award for the month of November. They also won the Orbitsports Award for October 1980. They also had the best goal difference in the league,m the most wins, the least losses and finished the entire league season with a 100% record away.

Josephat Murila, the leopards dependable defendere was also awarded the Player of the year Award at a ceremony that was presided over by Mr. Jeremiah Nyagah, the minister for Culture and Social Services on November 30th 1980.


The Leopards coach was Robert Kiberu, a soft spoken coach who hailed from Uganda.

During the season, Leopards had a stormy encounter against Kisumu Hotstars on 30th August 1980 when a fan threw a panga (machete) that narrowly missed Nahashon Busuru of Leopards. In the 70th minute, Washington Wabwire, the leopards right back broke his leg in a rough tackle by the Hotstars left winger Francis Musolo. A section of the fans clapped cheerfully as Wabwire was stretchered off and rushed to hospital.When the game restarted, fighting broke out amongst fans and police were forced to use tear gas to disperse the fans. The game was called off and replayed in November.

The biggest win of the season came against Abeingo and Gema whom Leopards beat 4-0.

Only one player, Haggai Mirikau scored a hat-trick for the Leopards during the season in the replayed match against Kisumu Hotstars.

Joe JJ Masiga had the longest goal scoring streak as he scored in four consecutive league matches from 5th April against KFA, and then against Kahawa Cannons, Luo United and Maragoli.

Of the 47 goals for Leopards, none was an own goal and none was a penalty. Abdul Baraza scored a goal direct from a corner kick during the season.

Francis Kadenge scored a goal against the Leopards. At that time, Kadenge was playing for Maragoli FC.

The full final table standings were as follows:-

The leading goal scorer was JJ Masiga with 13 goals whilst Aggrey Lukoye followed with 6 and Haggai Mirikau with 4.

*this is also a rebuttal to this and this

*acknowledgements to Emmanuel Mketu, Francis Nandi and Victor Bwibo for their lead role in the Leopards Archiving Project (Project Golden) for the years 1964 to 2011. Further thanks to Trevor Mbati and Dennis Mbakhila for their assisting role in Project Golden. You may request for any seasons results by e-mailing magazine@ingwefans.com

*our reader Fidel wins two season tickets from the blog for his previous e-mail requesting for the results of the 80s. We have already given the 1986 results here. 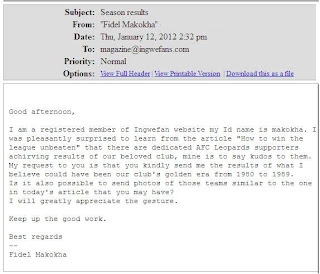