Leopards went to the top of the League and the coverage was on point!

The Nation went with this. 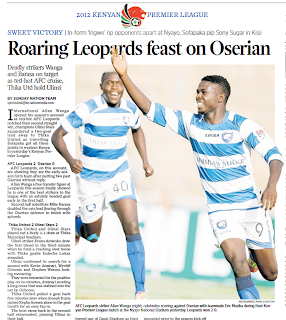 ALLAN Wanga led the assault and also scored once as AFC Leopards took an emphatic 2-0 victory over a fighting Oserian at the National Stadium on Saturday.

Leopards jumped to the top of the Kenyan Premier League table, albeit on goal difference over Sofapaka, after a performance of glorious entertainment no doubt going to spark bigger “Ingwe” following in the coming fixtures.

Oserian were worthy opponents and only the pedigree of Leopards, who clearly bore a title contender tag, dampened the Naivasha team’s efforts. Mike Baraza came on in the 61st minute to score the second for Leopards in the 77th minute.

Nervousness and too much wild use of the ball marked the clash between Nairobi City Stars and Karuturi Sport that preceded the AFC v Oserian delight.

When AFC Leopards made the breakthrough with Allan Wanga’s stylish header in the 22nd minute it was confirmation of the edge they had over Oserian in spirited play.

Wanga and hyperactive Ugandan pace-man Jimmy Bageya had kept the attacking pressure on the Oserian defence and most affected was goalie Enock Obong’o.

The ‘keeper had been troubled by a ball that almost let in Bageya to score in the sixth minute. It was indeed Obong’o’s blunder that indirectly led to Wanga’s opener.

The Oserian ‘keeper could have taken in his hands a slow harmless ball coming into his goal area but when he sloppily tried to control it with his feet it trickled out for a corner.

When the corner from the right was eventually saved by the Oserian defence, and booted to the midfield, Charles Okwemba made a lightning counter on the right flank, brilliantly dribbling past two defenders, both of whom fouled him. The second ended with a yellow card caution and conceding of a free-kick.

Salim Khamis swung the ball in from 35 yards and Wanga, unmarked in the six-yard box, rose magnificently above everyone else, his classical header powerfully directing the ball past a hapless Obong’o.

It was marvelous to see Oserian refuse to lie down and die. And thrilling too, to see men like John [Kio] Kabui, a lowly journeyman through several clubs in the last half a dozen years, taking up captaincy and a key role inspiring Oserian’s midfield play.

Other new arrivals at Oserian who played like veterans of the team were ex-Karuturi man Tom Onyango and ex-AFC Leopards defender Franklyn Osama.

But it was Wanga who was again to miss golden chances in the 50th minute and the twice within the 57th minute. Obong’o was in all sorts of trouble in the goalmouth scrambles that took the ball to safety.

But Oserian never shied at attempting responses to whatever was thrown at them. Indeed the busiest man at the Leopards defence was the man in the middle, ex-Karuturi Amon Muchiri, making his first start for the new club in the absence of Jonas Nahimana who flew to Kigali to take up Rwandan national team drafting.

Oserian’s best chance fell to replacement Tyrus Ojuki, five minutes after coming on in the 61st. He approached the box from the left and with clear space he could only direct his left foot shot to the side netting.

Leopards were still very dangerous and confident on the ball and the question was why they only had a 1-0 lead. And Coach Jan Koops had the luxury of having such class players as Oscar Kadenge, Francis Chinjili, Victor Ochieng’ and Baraza, before he came on in the 61st minute.

Koops had a calm view of his team’s performance from the bench and the bringing on of Baraza -- for midfielder Charles Okwemba -- into the attack with Wanga and Bageya was perhaps just to show that Leopards could shift a gear up if they so wished.

Indeed, and Baraza’s goal was a beauty.

From 40 metres out on the left, the Bageya timed it perfectly to put the ball into the box for Baraza who was left to merely side-step the on rushing ‘keeper Obong’o and then drive with his sure left into an empty net.

More of the Nation: 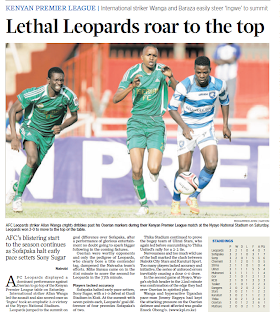 A goal in each half by Allan Wanga and Mike Barasa sent AFC Leopards to the top of the Kenya Premier League with seven points after crushing Oserian FC 2-0 at Nyayo National Stadium.

It is the first time that Leopards have been top of the league standings since making a comeback to the top flight in 2009.

Wanga opened the floodgates on 21st minute when he headed brilliantly a freekick taken by Charles Okwemba to send the home team fans wild on the terraces.

Barasa who came in as a second half substitute for Okwemba scored his first goal of the season on 84 minutes after being put through by Jimmy Bageya.

A serious injury suffered by defender Abbas Kiwalabye was the only blot in an otherwise perfect day for Leopards. He suffered a serious cut in his leg that required several stitches and will be out of action for several weeks.

Oserian however left with their heads held high after impressing with their display. They could have reduced the arrears in the dying minutes through John Kabui and Gordon Okoth who both saw efforts go narrowly wide

AFC Leopards on Saturday evening pulled themselves to the top of the KPL log after a well deserved 2-0 win over new comers Oserian FC at Nyayo stadium. Strikers Allan Wanga and substitute Mike Barasa scored in each half to give the Leopard the fancied win that also ensured Matasi holds a clean sheet with three matches played.

After the match, AFC advantaged by a superior goal difference toppled Sofapaka who earlier on Saturday afternoon dismissed Sony Sugar 1-0 in Kisii at the Gusii stadium. Both teams are on seven points.

This was Allan Wanga’s first goal for AFC Leopards though he contributed to last week’s win over Mathare United with an assist to Bageya’s goal. Wanga was named man of the match after being a true menace to the Oserian defense line throughout the match.

Wanga headed in Leopards’ first goal from close range in the 21st minute after Oserian keeper Enoch Obong’o missed an aerial drive by Salim Khamis Kinje.
“This is a good thing. Am happy to start scoring as early as in my second match. We played well though we lost a couple of chances but all in all we are home with three points, that is the important thing.” Wanga Said after the match.

It was a tale of numerous missed chances for AFC who maintained pressure against Oserian, hungry for more goals but lack of precision frequently cost their finishing though they went to the break a goal up.

Substitute Mike Barasa came off the bench to seal the day for the Ingwe family in the 75th minute, following a pass from Jimmy Bageya.

Abbas Kiwalabye had numerous open overlaps to the front in the final minutes of the match but Oserian Keeper twice stood strong to deny him glory.

After the match AFC Leopards coach Jans Koops said the win motivates their performance as they charge themselves up towards lifting the squad.

“We are now happy to be at the top. They played really well, we could have scored more goals but we are satisfied with the two goals we got today.” He said after the match

The Standard also had Wanga's photo. 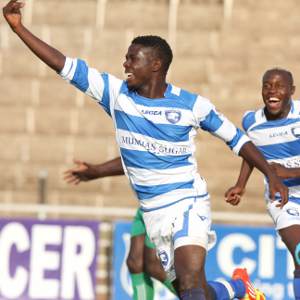 It might have taken a while, but finally, AFC Leopards are top of the Kenyan Premier League.


Ingwe saw off the challenge of Oserian 2-0 at the Nyayo National Stadium in Nairobi, Saturday 25 February 2012.
Allan Wanga and Mike Baraza were on target for Leopards as they usurped Sofapaka to take over the league leadership. Sofapaka had earlier beat SoNy Sugar 1-0 in Kisii.
Wanga opened the scoring after 21 minutes, heading in from close range after Oserian goalkeeper Enoch Obong'o came off his line and failed to make any contact on the ball, allowing the striker a free header.
Leopards dominated the entire first half with Wanga and fellow striker Jimmy Bageya imposing themselves on a shell shocked Oserian.
Wanga should have scored earlier on, missing a good opportunity after being played in by Charles Okwemba, but he would make no mistake when Salim Kinje floated in a perfect free-kick.
The second half was also one way traffic with Wanga again guilty of missing guilt edged opportunities.
Oserian tried to get back in the game and gave Leopards some nervy moments, but the game was done, when Baraza, a substitute in place of Charles Okwemba slotted home after good wing play from Jimmy Bageya after 77 minutes.
Leopards saw off the last couple of minutes to maintain their clean sheet and go top of the table, on goal difference from Sofapaka.
Both sides have seven points, but Leopards have a superior goal difference, having not conceded a goal this season. SoNy Sugar are third with six points. 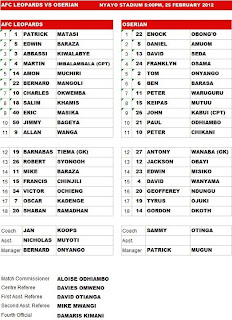