·               2,485 Fans
AFC Leopards SC, holds itself out as a big club and most of the Kenyan commentators will always speak of how the team has 6,000,000 fans.
Well, two thousand four hundred and eighty five (2,485) fans paid gate entry charges this weekend to watch the Leopards as they played against Chemelil Sugar at the teams home ground at Nyayo Stadium along Lang'ata Road in Nairobi.
The stadium is a 30,000 seater stadium and there were large spaces of empty seats the Leopards played. Granted, in other matches save those of Gor Mahia, the crowd is even less but this was a poor show for an opening game by the Leopards fans. 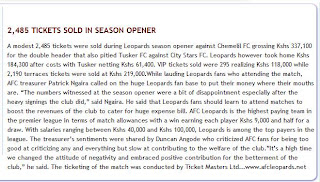 According to the report on the official website, this crowd raised a total sum of Kshs. 337,100 which was broken down as follows:-
Main Stand:   Kshs. 118,000 from 295 fans paying Kshs. 400 each
Terraces:      Kshs. 219,000 from 2,190 fans paying Kshs. 100 each
By any standards, if this is any indication, the team is going to struggle to raise a sum of Kshs. 15 million in gate collection during the course of the year. There are even worse news since the game was a double header and thus the costs were shared at a 75:25 ratio with Tusker Fc who had hosted the curtain raiser, meaning thatour club only got Kshs. 184,300 'after costs'.

Earlier in the week, a section of fans had complained that the intended figure of Kshs. 200 as the terraces charge was going to keep away the fans. This was after a report appeared on Futaa quoting the Acting Secretary general Duncan Angode indicating the fee rise. Despite the lower charges, the attendance wasn't as expected leading Angode to express shock at the fans who have a penchant for criticizing the actions of the office and administration but doing little to help the club in its endeavours to increase its income.

It also appears that there may be other measures that have to be put in place to regulate the fans who attend the match. A cursory look around the stadium pointed at at least 5,000 fans in attendance if one counted the number of the terraces that were filled up and divided it with the number of terraces that are in the stadium and based the total capacity of the stadium at 30,000 fans.
It is time Ticket Masters came up with a way in which it could identify those who have purchase tickets and entered the stadium to assist the club separate the wheat from the chaff. It doesn't make sense for 10,000 people to turn up at the clubs elections each year yet only a few people attend matches. It is for this reason that the proposal is given that each ticket purchase should have the names given and recorded so that we can know the 2,485 brave fans who paid to watch the Leopards and who may once again be the ones who attend the other matches of the the team.
A few fans had indicated that anyone who did not turn up in official replica jerseys would be 'disciplined'. Such comments are unfortunate and in an era where the club is struggling to get the stadium to be one tenth full, merely come across as more insecurity concerns for other fans who would otherwise attend.
Some avid Leopards fans chose to watch the Manchester United versus Liverpool match on TV rather than come to watch the Leopards. At the end of the day, we owe it to ourselves to come out in large numbers to cheer on the Leopards.
The club had indicated this week that they have released season tickets. In the face of the attendance this is one thing that needs to been encouraged. There are queries over the matches that will be 'away' though they are home matches but perhaps this will not be a reason for a lower uptake.

The all-girl group's CSR mainly focused on the inmate’s children some of whom were as young as one year and who live in the prison with their mothers. The children were face painted and they also played on a hired bouncy castle.

Leopards is a commUNITY club and events such as this call us to be more unified and dignified as we care, share and repair the lives of those in our commUNITY who are less privileged or whose privileges have been curtailed. 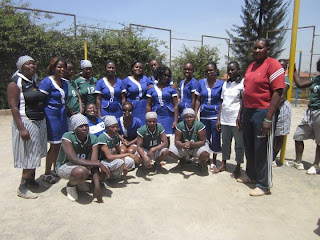 It is such acts of altruism that make this club non-pareil and congratulations are in order to the Ingwe Ladies for improving the image of our club and putting a smile on people who will remember they were visited by fans of our great club.