AFC Leopards will be odds on favourites to beat Oserian in Kenyan Premier League action this weekend.

Ingwe will be at the Nyayo national Stadium for a third time this season, when they host a good-looking Oserian outfit on Saturday 25 February 2012.

Having seen off the challenge of Mathare United 2-0 in their last league match, they will be under pressure to do even better against an unpredictable Oserian side.

Leopards will have a couple of national team Harambee Stars players in their ranks and should thus find Oserian easy pickings in front of their home fans.

Despite being beaten by SoNy Sugar in their last clash, the flower men gave a very good account of themselves and will be confident of pulling off an upset against Leopards.

Chemelil Sugar were the last visitors to Nyayo to play Leopards and they rolled away with a point after frustrating Leopards to good effect.

Leopards will have the luxury of a near fully fit squad and after their exploits against Mathare should really see off Oserian's challenge.

Rwanda defender Jonas Nahimana, away on international duty, will however miss out for Leopards. 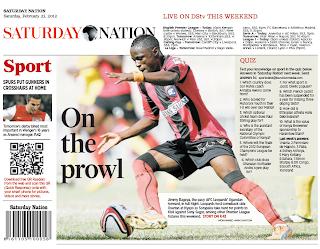 The Star goofed on the opponent:-