Leopards started their Kenya Premier league campaign for 2012 with a 0-0 draw against Chemeli Sugar FC. 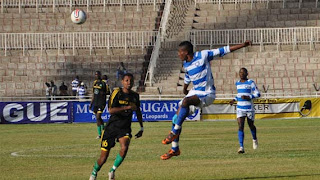 AFC Leopards and Chemelil FC settled for a barren in their opening 2012 Kenyan Premier League fixture played at Nyayo National Stadium on Saturday afternoon. The match came minutes after champions Tusker had booked themselves a 2-1 opening win against City Stars at the same venue.

The hosts-AFC Leopards- began the match on a high and strung passes that gave the crowd hope of an early goal that was never to be. A harmless back pass almost gave Ingwe the opening goal early in the match  after Chemelil keeper Fred Onyango misjudged the ball  but luckily he was far off the post and it rolled out for a corner.

Chemelil’s reply to the leopard’s strong start were masterminded by new signing Hadji Mwachoki but the solid combination between Nahimana Pako and Eric Masika proved hard to beat at the defense.

Midway through the first period, Salim Khamis and Jonas Nahimana misdirected their long range shots while Mike Baraza squandered the last opportunity in the first half.

Hadji Mwachoki had the first effort on goal immediately after the interval but keeper Patrick Matasi made a meal of his shot with an easy hold. Minutes later, a goal mouth melee at Chemelil ‘s end almost broke the deadlock but the ball did not cross the line as the sugar men held on to their good run against Ingwe.

Ugandan Abbassi Kiwalabye tried a grass cutting shot midway in the second period against his former masters but the Chemelil keeper read him well as he comfortably held the ball in his gloves.Jonas Nahimana and Masika tried to capitalize on another goal mouth melee but the ball was cleared by the Chemelil defense before further damage could be inflicted.

AFC Leopards Substitute Jimmy Bagaye who had come on for Oscar Kadenge beat keeper Fred Onyango but could not direct the ball into the net. Mike Baraza’s header after a neat free kick went wide as Ingwe intensified their attacks and Chemelil padded their defense.

Another substitute Laurent Tumba had the final effort in the added minutes but keeper Oyango again rose to the task to end the match on a stalemate and secure visitors Chemelil a vital away point.

After the match Chemelil Sugar coach Edward Manoah said he is satisfied to have opened the 2012 campaign with a single point away and against a good team.

“It was a good match and am satisfied with the performance of the boys. One point is not bad for a start considering we were playing away and against a very solid team.” He said.


Wilson Mathu of Futaa had this report

Chemelil Sugar ensured that their clean away record against AFC Leopards was not tainted after holding them to a barren draw at the Nyayo National Stadium.
The season opener however witnessed a host of chances from both sides but neither was converted for a goal.

AFC Leopards started on a high with Mike Baraza showing flashes of brilliance on the left flank but failed to direct his efforts.

Chemelil Sugar keeper Fred Onyango was on the spotlight early in the match after lazily missing a back pass but escaped punishment when it rolled out of play.

Matasi on Leopards goal was first tested in the 15th minute from a Haji Mwachoki strike at the egde of the area.

The game then slide back to a balanced one with each team giving as much as they got to ensure a draw into halftime.

The second half registered increased pace with Ingwe the more ambitious side of the two. However the same plague of missed chances followed them despite injecting pace through Jimmy Bagaye.

Bageya squandered a glorious chance in the 82nd minute after Fred Onyango left his line but his flick rolled out of play.
New signings Masika also had his bicycle kick blocked in the dying minutes with the follow-up losing direction in the hands of Tumba.
The result ensured that each team snatched a point which gives them a platform to kick start season.


AFC Leopards and Chemelil fought out a 0-0 draw on their season-opener at the National Stadium on Saturday. It was a rugged affair that neither team could force command. The happier would have been visiting Chemelil whose coach Edward Manoah said it was good to get a point away from home, especially in Nairobi.

“I can’t be disappointed. Our pre-season training was behind by a week, so we clearly have a lot more work to do so that we can play at our best. “Today we hoped to catch them [Leopards] on the fast-break counter-attack but we did not quite achieve that,” he said.

Crunching tackles rather flowing play was the hallmark, Chemelil appearing to bear the brunt late in the second half. Smith Ouko, Victor Omondi and ‘keeper Frederick Onyango writhed in pain calling for medical attention. The shots-on-target count was a woeful three to one in favour of Leopards, whose final attempt in the 86th minute from second half substitute Laurent Tumba the most skilful.

But with a bit of luck, a goal would have come Leopards’ way courtesy of very poor goalkeeping by Chemelil’s Onyango. Beginning with an early howler when he almost let in a slow ball trickle into his net, Onyango was poor at crosses, crushed into his defenders, caused stoppages while calling for medical attention and was a forlorn figure throughout the match.

From one of his fumbles, AFC Leopards ought to have got a goal in the 52nd minute.
Midfield play was, however, one of the bright spots of the match, both sets of men in the middle of the park trying to exert control. It was a good enough contest to serve the man-of-the-match award to Leopards’ Bernard Mang’oli who received a DStv “Walka’ Mobile set from KPL’s broadcast rights holders, SuperSport.

“Our fans looked disappointed at the end; it shows how high their expectations are, so we have to improve. However, we didn’t lose and we have a valuable point which is always good at the beginning of the season,” Mang’oli said.

The Sunday Nation gave it two lines... but at least there was pic of Bernard Mang'oli. 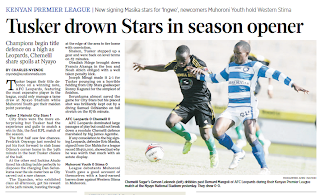 And of course the league table courtesy of KPL website 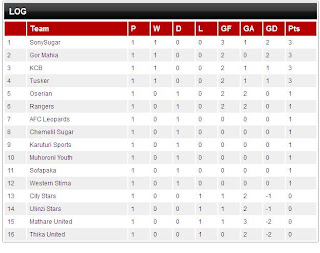