It is said that football fans are the hardest category of people to please and this manifests itself in many ways. For the past few months. Leopards fans have been insisting on being given the “Financial Accounts’ of the society, which is the legal form of the club and today, they woke up to the advertisement notice placed in the Daily Nation newspaper at page 38 that was an extract from the Accounts. 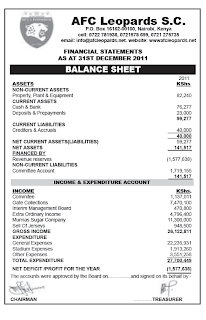 Olyver Sikuku asked: Accountants wako wapi (where are the accountants), hii (this) revenue reserves, does it mean we used reserves to finance the team or money was put in reserves. Now that its figure is same as the profit deficit, what does that mean?

Tuti Eliab observed: Our club is broke, how do we boost out accounts? And what happened to the 2 pieces of property on in Kasarani and the other I don't know? Are those not part of Assets.

Fanuel Amadi stated: We need an independent asset valuation. Players are bought at a fee and hence should be treated as asset depending on their valuation. Our assets are greatly undervalued, does it mean we are this broke? What about comparison with previous years performance? We need to compare our current status with that of last periods performance to ascertain whether we are making progress or not. What about the statement of cashflows, can the EC also publish this? As much as this is a step in the right direction, let the issues raised be addressed and corrections made.

Suleiman Angulu said: Our club has been made broke by those in control. Smart TV, Ingwe Nites have not been factored in the balance sheet.

Simiyu Katiambo proferred: I am told they were prepared by Deloitte. Naona maswali mengi lakini (I see many questions but) no expert opinion.

That is just a sample of the comments. There are many other comments that one may read on the said Wall and perhaps other fora. One thing it shows, is that football fans sometimes don’t know what they want. To quote Phil Gregory, anyone needs at least a rudimentary financial knowledge to make heads or tails of a club’s financial reports. Naturally only a very small portion of the fan base has this and so they take what the club says at face value. This leads to issues where the club can shift the goalposts.

Football is not like any other business, where only the stakeholders in a firm hold a financial stake and so apprise themselves of the situation. Every football fan has an emotional stake in their club, and so a football club has a responsibility to go the extra mile to make sure fans know what is going on. From the above, and what Amadi has stated, how can a fan know what is going on inside their club if they only have a general figure for turnover, with no breakdown into constituent parts?

As a quick basic accounting guide to my fellow fans the following can be said as a way of definition. (Noting that this blog is written by a non-accountant)

Property Plant and Equipment: Are non-current assets that can only be ascertained though inspection and valuation to determine values.

Cash & Bank: This is the liquid cash and bank balances as per the bank statements and cash held in the offices.

Deposits and Prepayments: These are assets for they are funds paid to suppliers in advance before the goods or services are supplied.

Creditors & Accruals: Are amounts not yet paid to suppliers after goods have been delivered or the services rendered.

Revenue Reserves: Are retained losses which are attributed to the club.

Committee Account: Is income attributed to (perhaps) the member contributions to run the club.

Gate Collections and Sale of Jerseys: Self explanatory income

Interim Management Board: payments made by members for registration and perhaps nomination fees and which were handed over to the club perhaps net of expenses (due to the low figure of Kshs. 470,800. This would have meant about 4,708 members paid up members but there must have been others costs like hiring the venue of the elections etc)
Mumias Sugar: These are the sponsor amounts. Perhaps should have listed Smart TV likewise if there was need to list sponsors separately.

General Expenses: Normal expenses associated with running a club such as accommodation at away trips, transport costs to stadia, payment to stewards and so on.

Other expenses: Not clear but is something one has to look at the breakdown to differentiate from the General expenses.

That is the short version. To get into comments, I first thank the Executive Committee for taking the step to share the financial information. Hopefully, those fans who wish to peruse the accounts themselves will be given an opportunity to do so. That shows a level of professionalism at the club.

There will be questions raise as to whether the auditors were in the picture of what has been transpiring at the club. Rumours have been doing the rounds that even the gate collection from the Gor Mahia match that we hosted in the second leg never made it to the bank. If such was the case, I am sure the auditors would have raised in their management letter to the club.

Generally, the balance sheet is very unhealthy but not surprising for our club. In fact, the Income and Expenditure Account is in millions of shillings and the Balance Sheet in thousands of shillings. That is such a big contrast. That is not always a good thing, though not of particular concern.

The club has no assets, has no fixed assets (maybe the recently mooted idea of a club bus may finally be one fixed assets), and has no receivables.

It will be interesting to note what the accounts state about the much talked about piece of land that was given to the club by President Moi sometimes in the early 90s. Under the Question Number 437 asked by the current Prime Minister Raila Odinga and answered in Parliament on 6 July 1994, it was confirmed that the club had been allocated land in Embakasi after the Kasarani allocation was cancelled. This would be a huge fixed asset for the club. 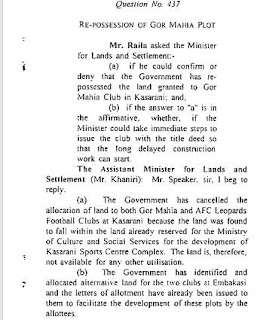 The three year sponsorship by Mumias Sugar is also usually spoken of as being worth Kshs. 15 million. Admittedly, some of this may not be in terms of cash and as noted, the same is listed as Kshs. 11.3 million in the accounts. With the total expenditure being pegged at Kshs.27.7 million, it was observed by Dr. Anthony Walela on the debate on online media, that the non-Mumias expenditure therefore is about Kshs. 16.4 million, which dwarfs the sponsorship deal.


Though not broken down wholly in the Income Statement, the club raises funds from gate collections from fifteen Premier League home matches, sale of merchandise (and this has included not only replica jerseys but CDs and posters to name those seen at club functions), revenue from TV deals including the rumoured Kshs. 3 million from Smart TV, grants including the monthly payments from Kenya Premier League, donations and legacies (in the course of the year there was debate about some Kshs. 50,000 given by the Town Clerk as a donation), membership registration fees and nomination fees (this seems to have been largely handled by the Interim Board but at the end of the year, the club was registering branches at a fee of Kshs. 10,000 each and by the close of the financial year, there were a few takers), transfer fees (it appears the club has been releasing players without getting any transfer fees though there is a current dispute over the controversial transfer of Collins Kisuya to Germinal Beerschot where the club expects some payment) and so on. There could be other sources of revenue not particularly listed here from an outsiders perspective.
Without previous accounts (and this also points to the previous EC), it is hard to make out things like the progression of the revenue reserves. Ordinarily, this should be accumulated losses but it appears the figure of Kshs 1.5 is all starting from scratch.

The committee account that is a liability reminds one of the Sambu years when the club was always invariably indebted to the EC and especially the Chairman of the Club. One hopes that this is some form of loan with clear re-payments. There are people who may make demands on the club or saddle the team with debts that are unclear and which cannot be verified until one carries out a forensic audit. Hopefully, the committee account is supported by receipts that one can verify the items on the expenses that this needed.

There are other things that perhaps could be clarified. It has been stated by other fans that we still had some jerseys on sale at Imenti house and they could be part of 'stock' and hence could form part of the debtors or current assets. In the event the club has also ordered some more replica jerseys which may have been on sale, then they would form part of the stock.

Considering the volume of expenses (close to Kshs. 27m) and the cash, one really can’t do much with the funds in the bank. For those of us who have followed the goings on, they wouldn't go to say, there is much wrong in some of the figures at a cursory glance. In fact, if one was to add figures plucked from the atmosphere (eg. saying we averaged Kshs. 300K in collections except the Gor match where we got about Kshs. 3m will lead you to something like 7.2m against the 7.4 reflected so it doesn’t seem to be too off the mark but that is engaging in speculation... sorry).

That is the difficulty of understanding this without the other information. You can only guess. One can’t tell for instance whether our trademark is capitalized as an intangible asset; and one cant also tell whether the costs of acquisition of players should have been capitalized as intangible assets and amortized over their periods of their contracts.

There are no taxation issues in the statement though on the basis of the net deficit or net loss, there would be no taxes payable or due to the Revenue Authority. One is however left wondering whether our players’ salaries are taxed.

Speaking of the net deficit, usually the operating profit shows the core strength of the business or of a club, and is often referred to as EBITDA (earnings before interest, taxation, depreciation and amortization). Depreciation is just the general fall in value of club assets due to age, the other two being fairly obvious.

For most clubs, the “ITDA” bit doesn’t account for a massive amount of money comparative to wages and the like, so even if they made a profit, one can’t trust an operating profit figure. If a club can’t make an operating profit, which takes into account the main costs and revenues, then it really is in a total mess. If any other business in a more sane industry was making an operating loss, the banks wouldn’t lend them money to cover their losses hand over fist due to the risk of default, but logic seems to go out of the window when people consider football clubs.

But good to see some published financial statements and I do thank the EC for this.