Stories by EM writing for the defunct afcleopards.com, Tuesday May 21, 2002

Something special is being served up this Wednesday. Mathare United make their long awaited visit to Nyayo National Stadium to take on Moi Golden Cup Champions AFC Leopards in the first leg clash of the Premier League Zone B.

On the pitch, it is simply a clash between the Zone's number three team and the number five team.

Mathare United have six players in the national team Harambee Stars, Leopards have none.

United have three official sponsors in Ng'ombe, Safaricom and Kapa Refineries, Leopards have none.

The two teams have met in the last two Moi Golden Cup finals and split the honours with Mathare taking the first at Moi International Sports Centre before relinquishing the crown to Leopards at Nyayo National Stadium.

Both teams were knocked out of continental championships this year in the first round. In fact, their first meeting was scheduled for 16 March but was postponed at the request of both teams who had just been knocked out of Africa the previous weekend.

The re-arranged fixture fell on April 20 but was rained off with the teams tied one all. Mathare had drawn the first blood before Bernard Makuto levelled.

The rivalry was however evident in the last fixture and as Daily Nation columnist Chris Tsuma put it: So intense is the rivalry between the two teams that it now appears Leopards would rather lose to any other team but not Mathare, a welcome development because it is the kind of passion and fierce rivalry that local football needs. (Saturday Nation, April 27, 2002)

Considering Leopards lost their last game to that 'other team' Kenya Pipeline, it is evident the players do not wish to see a successive loss.

Mathare United have had a great season, their loss to Pipeline and league leaders Nzoia Sugar aside.

Their roster of players includes exciting Titus Mulama, who was the man of the match in the sensational 5-0 win of Harambee Stars away to Tanzania over the weekend. He scored the fifth goal after hitting the woodwork moments before.

Dennis Oliech, their prodigy who has amazed with his form, is unlikely to play having been bereaved following the death of elder brother Steve Okumu Oliech, a former Leopards player who passed away in the United States last week.

With an incredible youth system (Mathare Youth Sports Association), United have the most formidable feeder route. It is no wonder maverick Chairman Bob Munro who attends most matches was recently during the Shabana funds drive 'advising' clubs like Leopards to forget harambees and concentrate on better fund rainsing techniques. Like Mathare.

It promises to be a mouth watering clash and referee Maxim Itur will be presiding just as he did on April 20.

Fans will hold their breath and hope the natural forces behave. And Organising Secretary aspirant Khalid Njiraini has promised Kshs. 10,000 to Leopards for each goal scored by Leopards.

It is upon the players to make him pay! The strike force was blunt against Pipeline but Brian Ombiji, Dennis Ochieng, Justus Basweti, Bernard Makuto, Asman Akwana and Vincent Agevi can grace any national team and make it six for Leopards too.

And as the last match before the elections, fans will need to take a look at the following Mathare United list of Officials as they gear to make their own decisions.

Flair versus Pride. Picture of the Future versus Blast from the Past. Moi Golden Champions versus Talented Challengers. The players and teams everyone wanted to have for a distraction during the busy World Cup season.

Based on the rivalry between the teams, in our pre-match analysis on Friday, we predicted ferocious Leopards. We did not intend to mean the fans. But in the end, it was the fans that played a crucial part in the game leading to its abandonment in the penultimate stages.

As is customary with games against Mat United, the nerves were frail right from the start. Leopards were pinned in their own half by a polished Mathare side and were made to pay by dangerman Dennis Oliech who netted the opener in a quick and flowing counter attack.

Mathare fans derided Leopards fans with chants of ‘AFC!AFC! AFC!’ as they celebrated the goal. Oliech had struck for the second match against the Leopards in a row having sealed Mathare’s win over Leopards on May 22 with a second goal. Leopards, who did not expect Oliech to play as he was bereaved, were disjointed in their play leading to frustration amongst their fans who easily outnumbered the home fans of United. The United fans however outsang the Leopards fans with the rendition of ‘Mathare Wanisumbua’ parody of the John Amutabi Nzenze ‘Rebecca Wanisumbua’ track.

However all this changed in the second half when three substitutes were brought in and delighted the leopards crowd with their crisp passing. The leopards fans found their song again and the isukuti beats reigned supreme.

An equalizer did not seem far. Then Dennis Oliech turned from hero to villain when he was sent off by the referee. Oliech had gone down in what looked like a challenge but to his horror, the referee gave him marching orders for dissent. Oliech left the pitch in tears, as Leopards fans pointed out that his tears were the sign of mourning his recently departed brother and former Leopards striker Steve Okumu.

Leopards did not take long in playing against ten men.  A crunch tackle by Leopards defender Vincent Agevi was harshly punished with a red card to draw the teams at ten men. It was an eerie resemblance of the previous clash on May 22 when two penalties were awarded to the teams.

As Leopards poured at the Mathare goalmouth, the isukuti drums roured alive as did expectations. Thye referee did not endear himself to the crowd when Brian Ombiji went down in the D and the leopards fans rose to their feet with the word PENALTY on their lips. It was not a penalty.

The linesman on the so called ‘Russia’ side of the stadium suddenly found himself under a hail of stones. He was badly cut on the back of the head and required stitches on the pitch as Ombiji was also attended to.

Play was stopped for almost fifteen minutes as the referee sought reinforcement of police officers on the side of the unruly and shameful fans.

When play resumed, Leopards piled on the pressure and snatched what looked like an equalizer to send the Leopards fans into a frenzy of celebration.

This was halted as the referee changed him mind after pointing to the centre spot and raised his hand to signal that it was no goal. The linesman flag stood raised. If the Leopards match against Mathare on April 20th had been abandoned on account of rain, this one was abandoned on account of hail stones as a hail of stones suddenly rained on the pitch forcing the Police to fire teargas into the crowd. Perhaps all the fans could also now mourn the departed Leopards striker too.

The shame of it all was that this was a match meant to celebrate a public holiday, Madaraka Day, when the country gained its self rule. A glittering trophy on the dais was covered in tear gas. Apart from the trophy, it was really a match the Leopards only had pride to play for.

With a new office in place, perhaps one of the first things that they have to deal with is the control of the so called fans. They had also abandoned the match against Kisima Bombers earlier in the season. The new officials in attendance were the Chairman Samuel Angote, secretary general Stephen Mutoro and Organizing Secretary Khalid Njiraini.

It was a goal! We were not sure as we left the ground due to the fact that in our excitement of an impending equalizer, we had all jumped up in celebration even before Francis Xavier introduced his head to the great ball from Jackson Omondi and it shook the Mathare United goal.

The linesman Samuel Muhindi who was next to the Mathare United bench robbed us. Look at it this way, it was a lackadaisical refereeing that led to the dissatisfaction among the fans and which ultimately and predictably ignited the chaos.

We hold the view that whatever injustice is committed by match officials; it still does not give fans a reason to react the way they did. Speaking to afcleopards.com, Harun Ongoma was quick to point out that one and a half weeks ago, Mathare beat AFC but no violence was reported. ‘It was due to the fact that the refereeing that day by Maxim Itur was superb. Todays’s was terrible!!!’

This time around, referee Ogolla Nyangweso warranted some criticism for many questionable decisions. He sent off Vincent Agevi for seemingly no reason other than to appease the Mathare bench since he had also sent off Dennis Oliech.

He missed a penalty call on Brian Ombiji’s tackle by the Mathare defender who didn’t get the ball at all. In fact, the fans blamed the other linesman Thomas Otieno and one sharpshooter actually ‘voiced ‘ his disapproval with an accurate stone leading to the stoppage of the match and bandaging of the match official on his head.

It wasn’t expecting too much for the other linesman to keep his head clear and not make an offside call on the equalizer just because he was next the Mathare bench that cried: OFF! It is time the Kenya Football Referees Association  played a major role as it used to in the training, examining, appointment and vetting of match officials.

Incidentally, the Standard on Sunday quoted the referee as stating that he called off the match after both teams failed to restart the game. The role of the police was also wanting. They lobbed teargas outside the stadium immediately fan trouble was noted. A stampede also almost ensued as police on horseback charged at the fans.

Finally, what will we ever do with Denis Oliech? He is like the new Paul Onyera always scoring against the Leopards. We can only pray that he gets red carded in each game against us.

AFC Leopards has moved to court contesting a decision to award an abandoned Premier League match to rival Mathare United. The club’s lawyer Eric Mutua lodged papers yesterday asking the court to quach the decision of the Kenya National Sports council. Mutua was asked by duty Judge Andrew Hayanga to present his arguments this morning. He wants to High Court to order a replay or declare the match a 1-1 draw. 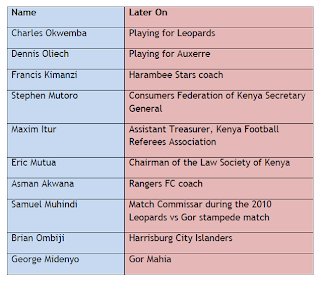