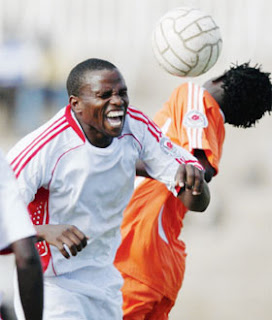 At the Coca Cola Stadium, Ulinzi Stars international trialist Evans Amwoka intercepted a back pass from Leopards captain Francis Xavier and set through Lawrence Owino to score with ease in the 20th minute.

It was just the setback the fighting AFC Leopards did not wish especially after opening very promisingly.

However, the never-say-die Leopards, who still have hope that it is a matter of time before they start climbing from bottom place to Premiership safety grafted their way back into controlling the match.

They squandered many clear chances with the biggest culprits being Tafadzwa Dondo, their lead scorer and Kenya trialist Sebastian Muchera and Collins Kisuya.

But Leopards, forever cheered on by unwavering "Isukuti" dancing fans, continued to prod.

Their much deserved equaliser came in the 55th minute through a Kisuya free kick from just outside the box.

Coach Edward Manoah said: "The best is yet to come. This was another hard game because both of these sides were desperately looking for a win but we have to be satisfied with the draw.

"Ulinzi boast of experienced players but they have failed to beat us, so I appeal to our fans to continue being patient. This is a youthful side still in a learning process. I believe we are capable of changing our fortunes in the second leg.

"We have identified several experienced players whom we shall draft in the second leg." 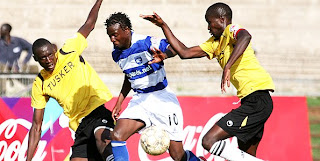 Tusker beat AFC Leopards 3-2 at the Coca Cola Stadium on Friday to jump to the top of the Kenyan Premier League table.

It was the first time in the season that Tusker, the 2007 champions, held the leadership and pundits who pick them as one of the title favourites would appear right.

Tusker led 1-0 at half time in the thrilling match. Nathan Mutenza struck in the 38th minute but Leopards were the quickest off the blocks in the second half, Sebastian Muchera equalising in the 46th minute.

AFC Leopards appeared to be doing pretty well in another thrilling Premiership match but in the end they blamed lack of concentration in the second half as the cause of their coming off empty handed.

The attendance was good and virtually all supported Leopards despite them being the bottom side in the 16-team competition.

Leopards were in the lead -- 2-1 -- untill the 63rd minute when poor marking cropped in, sparking off a Tusker brace of goals.

First, Nigerian import Joseph Emeka levelled for Tusker in the 64th minute with a crisp strike after beating Leopards defenders David Ochieng' and Arthur Weyula. Then Jerry Santos got the brewers' winner in the 72nd minute when he headed in a cross from Oscar Kadenge, beating custodian Teddy Okumba and silencing the bemused Leopards fans.

In the second half Leopards were always a yard slower in defence-- unlike in the first half.

In attack substitute Farid Ahmed will blame himself after failing to tap home what could have been Leopards' third goal in the 74th minute. He was left alone with Tusker custodian Boniface Oluoch but shot wide.

Earlier in the first half Ugandan Nathan Mutenza gave Tusker the opener in the 38th minute after a superb combination involving Jerry Santos and Augustine Etemesi.

To Leopards, the goal appeared to have been scored from an off side position and their fans protested bitterly when referee Caleb Amwayi's decision was to allow the goal.

After the change of ends Leopards had a short-lived resurgence which enabled them to score twice in three minutes. Harambee Stars trialist Sebastian Muchera made his presence felt, scoring first for Leopards in the 46th minute with a tricky shot to beat Oluoch.

Before Tusker could even regroup their international defender Jockins Atudo hacked down Muchera in the penalty area for the referee to award Leopards a penalty. Captain Francis Xavier stepped up to net it in the 50th minute.

Premiership play continues on Saturday with five matches on the card. The top clash will see Gor Mahia taking on defending Champions Mathare United at Coca Cola Stadium. The match will be preceded at 1pm by the Coca Cola Under-17 youth final which shall be beamed "live" by SuperSport TV.

Former Premier League (KPL) champions, Tusker, leaped to the top the table after beating AFC Leopards 3-2 in a breath-taking encounter at the Coca Cola Stadium, Nairobi.

But their lead at the helm may change today if Sofapaka beat Sher Karuturi in Naivasha.

Leopards, who are stuck at the bottom of the table with a single win from 10 matches, pushed hard, but Tusker’s defenders Jockins Atudo and Christopher Litswa proved too strong.

After 38 minutes, Leopards were caught against the run of play when Noah Abich’s cross from the right flank was tapped in by Hassan Mutenza from close range for the opening goal.

On resumption, Leopards coach introduced striker, Tafadzwa Dondo, in place of Umekwe Ekwe and the substitution paid off. Dondo, with his first touch of the ball, beat Noah Abich to deliver a cross to Tusker’s box and Sebastian Muchera drilled in a hard ball to level scores in the 47th minute.

Dondo was at it again three minutes later, this time releasing Muchera on the right and Tusker defender, Joseph Shikokoti, who had clearly been beaten to pace, clipped the striker inside the box in an effort to stop him and it resulted to a penalty.

Skipper Francis Xavier stepped up to take the kick and he made no mistake with the spot kick, giving Leopards a 2-1 lead.

The last 20 minutes was a tale of Leopards creating and wasting chances, with substitute Farid Ahmed being the biggest culprit. He wasted two clear cut chances with a yawning goal.

Nandwa said he rested most of his first team players as he focused on next weekend’s trip to Western Stima, which he said, would be tough.

"Today’s match was tough than I expected and I am happy were at the top of the table after a false start in the league. I rested some of my key players as I focus on the next weekend’s tie against Western Stima away, which I know would not be a walk in the park," said Nandwa.

Tusker climbed to the top of the Kenyan Premier League after coming from behind to beat AFC Leopards 3-2 at Coca-Cola National Stadium on Friday.

Nassan Mutenza gave the brewers the lead in the 38th minute before Leopard scored two goals in two minutes through Sebastian Muchera and Francis Xavier minutes after the restart.

But Tusker, champions in 2008, showed their quality, snatching the game away from the home team with an opportunistic strike from Nigerian Joseph Emeka in the 61st minute and a towering header by Jerry Santos nine minutes later.

“I am satisfied with the way we played. Conceding two goals inside five minutes put a lot of pressure on us but the boys composed themselves, cooled things down and turned the game around,” Tusker coach James Nandwa said after the match.

It was Tusker’s fourth straight win in a row and a clear warning to the rest in the KPL that the brewers are getting back to their imperious best.

Nandwa even rested several of his regulars including internationals Joseph Njuguna, John Njoroge and Edwin Mukenya but came away the spoils to climb to the top of the league table with 21 points .

Their lead may, however, be short-lived as second placed Sofapaka, on 19 points, could get pack to pole position with a win away to Sher Karuturi on Saturday.

Leopards were the first to threaten when left back Collins Kisuya forced an acrobatic safe from Tusker keeper Boniface Oluoch with a fierce 40 meter shot.

But Tusker got the measure of Leopards and began to dictate the pace with some good football.

The opener came for the brewers when the overlapping Noah Abich squared the ball to Matenza for a cool finish.

Tusker looked in control but were thoroughly shaken in two minutes of Leopards onslaught. Second half substitute Tafadza Dondo showed his pace down the right wing to cross the ball to Muchera, who showed why he is Leopards’ most prolific striker this season with a neat turn to pick his spot on 47 minutes.

Two minutes later Muchera won a penalty when he was brought down in the box and Xavier calmly stepped up to give Leopards the lead.

But the home team could not hold on against the well-drilled Tusker side. A hanging cross by Oscar Kadenge was not cleared by the shaky Leopards central defence and Emeka meted punished to restore parity to the match.

The hard working Santos was rewarded for his industry rising above the poor Leopards central defence to head home Tusker’s winner.