How To Win The League Unbeaten

In 1986, AFC Leopards SC won the top national football league in Kenya with an unbeaten record.

Since the 1979 season, the national diadem had been contested and shared only between Leopards and traditional arch rivals Gor Mahia with Gor Mahia taking the 1979 crown before Leopards went on to win the title three consecutive years 1980 to 1982. But what Leopards could do, seemingly, Gor could do too and Gor went ahead to win the title three years in a row too from 1983 to 1985! That set the stage for the 1986 title showdown that was always going to be another Leopards versus Gor Mahia issue and this time Leopards did it in style winning the title unbeaten!

The top two standings at the end of the season were:-

The memories of 1986 when AFC Leopards became the champions of Kenya with an unbeaten record will always however linger on.

Leopards all time leading goal scorer in the league Wilberforce Mulamba finished the season as the top scorer at Leopards with 21 goals whilst Francis Kadenge followed in second place with 15 goals whilst Patrick Shim scored 14.

The Leopards coach was Graham Williams, who is featured in the third issue of the Ingwe Fan magazine.

Twice against Gor Mahia and Re Union, the Leopards fell back to 2-0 scorelines but came back to win both matches 3-2.

To illustrate the industriousness of this Leopards team, they played consecutive matches within twenty four hours playing both on Saturday and Sunday for a total of 10 weekends. The league commenced in February but by September, 38 matches had been played.

The biggest win of the season came against Blue Triangle whom Leopards beat 8-0 away whilst rthe biggest home win was 6-0 against Nzoia Sugar.

Two players scored hat-tricks for the Leopards during the season with the first coming from Eliakim Amalemba against Kisumu Posta whilst the other was by golden boot Wilberforce Mulamba against Blue Triangle.

Of the 96 goals for Leopards, 3 were own goals whilst 3 were penalties.

Just like last season, the fastest goal was by a Kadenge, this time within the first minute against Kenya Tailex mills (KTM) by Francis Kadenge. The latest goal was the goal by Patrick Shim against Gor Mahia in the 90th minute.

It was remarkable that the Leopards went through the season without top striker Jay Jay Masiga who had knee trouble and sat out the entire season.

In a dramatic finale, Leopards played the last match against Kenya Breweries and were trailing 1-0 when David Akoi scored a last gasp equalizer. The Brewers disputed the goal and even knocked out Akoi's teeth. But the Kenya Football Federation upheld the result and it stood 1-1 leaving Leopards with an unblemished record in the League.

The only blemish to this unbeaten run in the league was that shockingly, the Leopards fell in the first round of the Moi Golden Cup to an inspired Volcano United whilst also going out in the Cup Winners Cup to FC Kalamu of then Zaire in the second round. 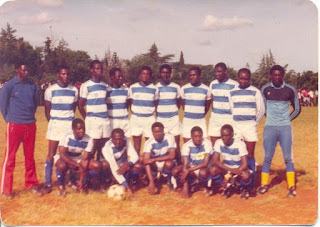 The full league results are as follows:-

*acknowledgements to Emmanuel Mketu, Francis Nandi and Victor Bwibo for their Leopards Archiving Project for the years 1964 to 2011. You may request for any seasons results by e-mailing magazine@ingwefans.com
Posted by Ingwe Fan at 9:01 PM