All transfer window periods always mean that the club is treated to an airport arrivals and departures zone. Since December, Leopards have had to say sad goodbyes to at least six players with news filtering in that the players who had been released had been unveiled at other Kenya Premier League teams. It is always a wonder that the officials at the club release players from their contracts at no cost and then acquire players for high fees. This is the reason the player amortization is so terrible. 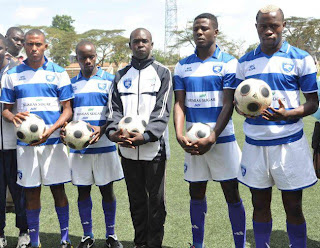 With Allan Wanga signing on, this completed an impressive end to the new-comers. Wanga comes with a high pedigree, his father having played for Leopards in the 70s and he holds the Golden Boot title that he won with Tusker FC before having a professional stint in Angola and other horizons.

It is one thing to sign the players and it is one thing for those players to perform as expected. Jan Koops has the necessary implements for his job with this reinforcement and the pressure must be high to perform. The Leopards nation expects. How the players will fit into the jigsaw puzzle and set out a campaign for the ninety available points as the season kicks off will determine the legacy of this team of true galacticos.  - FN

When bad things happen, it is impolite to tell people, ‘I told you so!’

But predictions that with the warring factions at Leopards calling elections and the others saying they should be the ones calling the elections, it was only a matter of time before the incumbent chair went to court. Apparently, this came to pass though the court declined to grant orders stopping the elections. Hmm… what to do? Place a notice in the newspapers distancing the club from the elections. The Star and the Nation carried the notice countering the Annual General Meeting notice placed by the Secretary General. 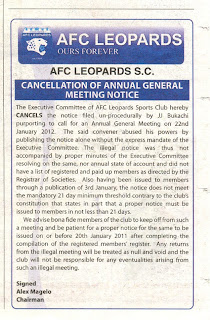 Both parties then went ahead with lists of branches and members being recruited. It is a tough time to be a Leopards fan when it comes to looking up to people who can offer leadership. Hopefully, the common sense that requires that elections be jointly held will be heeded and the warring factions will come together, even if just for the sake of greedily hoping they can win the joint elections. That, will be the stability and conducive environment the players, the sponsor and the fans would want to see as the preparation for the new season goes on. - VB

AFC Leopards beat Gor Mahia on post match penalties to clinch the ‘Peace Cup’ on December 17th last year. For the fans, the match was memorable as it immediately restored the memory of the Leopards lifting a cup over their arch rivals after losing against them in a Cup semi a few months back. This was of course not an issue of ‘bragging rights’ as the Leopards have been superior to Gor in terms of games won in competitive fixtures between the teams from the league matches, Cup games and regional matches.

One would have expected that the government body that was in charge of the match or at least the match organizers would have already paid up the prize money one month down the line.

They haven’t!This is according to a report that appeared in the Standard and penned by Gilbert Wandera.

Whilst a few murmurs have been heard from the fans about the lack of accountability for the funds received, it turns out the funds had not been received. It should always be important that people stick to a time-table when they have events so that for planning purposes, one doesn’t have to be inconvenienced by factoring in funds that have to go through various processes before being paid. Planning should not be an alien concept in this day and age! - VM

Ingwe Fans are everywhere. They turned up in large numbers during the unveiling of the players and on Saturday, they were in Woodley to witness CLAWS FC, the fans team take on a team from Kibera called Al Swaffa!

Clad in their Rio Tintos, the fans cheered on the fans team who came from a goal down to level the scores, miss a penalty before eventually losing out 2-1 to the will drilled Kibera lads who had a team of 30 odd players to choose from and who made substitutions after every few minutes to bring on fresh legs.

But it was feeling that the season was back as fans shared banter on the sidelines and then shared a meal together with a few words of advice from Shikuku Kisaka, the wise Chair of the Supporters Trust. – SE

Following our feature last week on the Baraza incident, this week we got a submission from one of our loyal readers of a photo of Mike Baraza, the leading scorer for the Leopards last season firing away! Here’s to hoping another season of great shots from Mikey! -EM 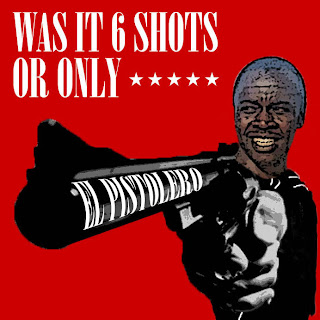