The election saga came to and end when the Registrar ordered that the elections scheduled by one faction to be held on 22nd January 2012 would not be held on that day. In a terse statement, the Registrar noted that proper mechanisms needed to be put in place before credible elections are held for the office bearers of the club. This had common sense written all over it and it was therefore surprising when one group went ahead to hold 'elections' on the day that the same had been cancelled and used the excuse that the letter was not copied to them. 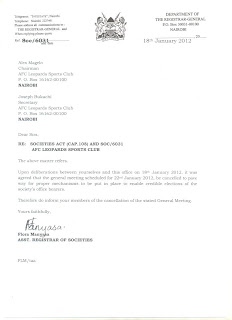 Clearly there is a lot of growing up that needs to be done at the club and it appears that sections of aspirants for office would wish to have shortcuts to the leadership of the club. Hopefully, the Registrar will give further directions as promised in her letter. - VB 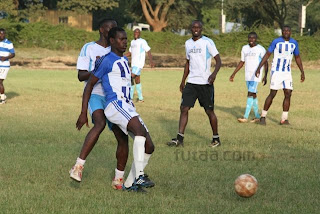 The Leopards drew 1-1 with the fit varsity lads and the build up continued with another outing against Nakuru Combined. It is early days and the team still needs to get fit for the season so there is no need for some fans to worry. But the team has to get it absolutely right on 11th February as there should be no margin for error. - SE

The Leopards arch-rivals Gor Mahia came out with an advert seeking suppliers. As expected, this was fodder for Leopards fans. Enjoy. - EM 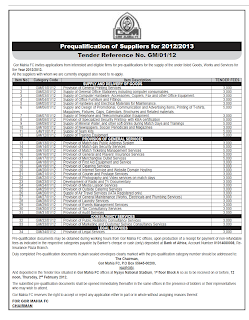