It was turning out to be the longest drawn transfer see-saw with unnecessary hullaballoo being created especially by George Bwana who insisted that the Leopards had breached various FIFA protocols in their quest to capture Eric. What was the transfer fee to be paid? Were there inducements to sign him? In the end, it all came down to the transfer fees as Leopards forked out Kshs. 450,000 (approx. USD 5,400) to sign the defender.

But to a great extent, this transfer was more than just the capture of a good defender to cover our goalie. Gor Mahia has been the bitter rivals of the Leopards and last year they were quick to pick on a player the Leopards had released, stoking the long drawn hostility that meets any transfer of a player from one team to the other. It appeared that the Leopards had to prove a point after the retaliation and in a fell swoop, did two things: captured one of the jewels of Gor  and rubbed in the faces of Gor the fact that they took a discarded player whilst Leopards took a player who was voted by mainly the Gor fans to be their player of the year.

Masika should fit in well with the Leopards and stabilize a defence that had been shaky at the beginning of the year and which seemed unsure with the departure of Collins Kisuya. - EM

The Daily Nation edition of Tuesday carried the announcement by Josphert Bukachi that the Annual General Meeting (AGM) of the Club would be on 22nd January 2012. He signed off as the Secretary General of the Club. That would surely be something not controversial, no? But this is Leopards where nothing is ever black and white. There are always some grey areas. In fact, the only certain thing in Leopards is blue and white. 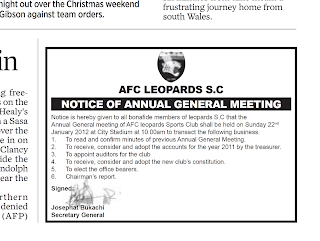 Last year, Bukachi was suspended on 20th September as Secretary General.  He was quoted on online sites claiming he has resigned. Yet in November, he was issuing a notice for an AGM. The Registrar ok’d it for 27th November but on being shown correspondence that Bukachi was suspended, nixed the AGM. But the same Registrar was then confronted with a court order of a case filed by two fans over two months after Bukachi was suspended/resigned and which order stayed the suspension of Bukachi and the Registrar changed tune again saying the outcome of the case should be awaited. The case comes up for hearing on 31st January 2012. In the meantime, the Registrar  when confronted with an Affidavit that showed the Chairman Ole Magelo deponing that his term was to end on 31st December changed tact again, from waiting for the outcome of the case to ordering elections within 30 days from 20th December, which Bukachi has now announced. But in the rush to unseat Magelo, the opponents have to be careful so they are not beaten at their own game. Predictably, the Magelo team has rejected the notice by Bukachi and indicated they will issue their own notice. It is a circus that shows the greediness and ignorance of a lot of people. - VB 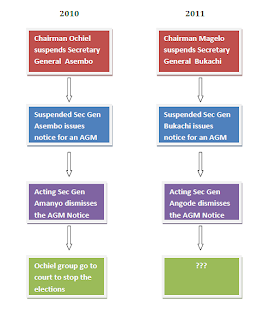 There is never any consensus on what our home, away or third kit should look like and when the EC representative Fredrick Lutta hinted at the design of the new kit for the 2012 season, there was an uproar on the FaceBook Branch Wall, the clubs premier discussion forum as hordes of fans voiced their views most of which were protests. There can never be any democracy on such an issue with some fans having complained about the use of the 6226 number on the jersey last year still unimpressed on the choice of Legea as the kit manufacturer on this kit. 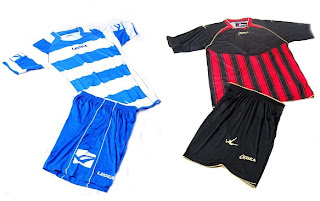 But for the serious lessons, it is time the marketing wing of the club and sponsor took issues a bit more seriously. The 2011 season is gone and yet the 2012 kit is still not available. If the club was to do an unveiling of players, they would be handing them 2011 jerseys, most likely and if a team photo was to be taken, it won’t be with the new jersey.

Planning forward has to be paramount and the new kit should have hit the stores already in the build up to the new season. But at least the hoops have been retained for the home kit so out future is still as bright as the skies – blue and white. - FN

Reports posted on the official website indicated that the club offices had been broken into. But here is a theory based purely on speculation. The two sides of the coin are both very suspicious of each other and are keen to paint each other in bad light.

Getting info out of the club is often difficult as those who have requested for information have found out. Last year, Oscar Kambona, a Leopards fan and registered member wrote to the EC and requested for the club register and accounts but he hasn’t received any reply until today. Some people though, who are affected by such information, such as the alleged non-member of the club might be tempted to use force to obtain such information and perhaps this was the intent on this particular day. That is wrong. There have to be proper ways to obtain information just the way there has to be positive feedback when one requests as provided for in the constitution of the club.

On the other hand, claiming that persons who are mandated to run the club are receiving money by false pretences is also quite wrong. The police have to be kept out of interpreting our clubs constitution or lack of constitutionalism. Both sides have to realize that the image of this great team has to be maintained and decorum calls for people not throwing words at each other through the official website and other for a like the social media pages. We need to return to common sense, Leopards fans. - SE

Picture this. Mike Baraza is preparing for the clash against Gor Mahia on 18th March, 2012 and decides to have a feel of the pitch. He enters the pitch from the dressing room and in his hurry he has forgotten to carry his badge. A Gor steward notices him and asks him to stay away from the pitch. Mike pinches the steward’s nose and tells him: You should know people.

And in the course of the game, he gets into a great position and pulls the trigger by unleashing a shot that beats the appropriately named Mapunda in the Gor goal sending Leopards fans to chant: El Pistolero! El Pistolero!

You can dream. Go Baraza. But he has to contend with the complaint by the steward about his behavior. - VM