From where I was seated, one fan summed it up: 'Goal keeper amesambazia Bandari pointi'

But the truth was that Leopards were wasteful against a woeful Bandari side and it wasn't only the 'volleyball-happy' goalkeeper who was to blame for the shared spoils. 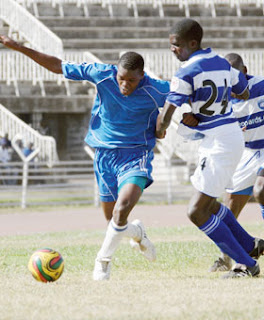 From the Standard Report

Leopards who were chasing their first win since returning to top-flight football dominated the match and will blame themselves for not killing off their opponents in the first half as they wasted a host of chances.

Leopard’s Ahmed Farid made several forays on the right flank but it was Bandari’s Zuberi Kombo who had the first chance of the match, hitting Leopard’s cross bar with a thunderous 25 yard volley that had beaten custodian Charles Onyango in the 18th minute.

Leopards responded immediately in a sleek counter attack that ended in a goal in the 21st minute when Dennis Mukaisi sent a powerful header past Bandari’s goalkeeper Abdulrahman Swaleh after receiving a cross from Michael Njehia.

Alfred Chege hit the side netting twice for Leopards but they could not increase the tally, to go to the breather leading 1-0.

On resumption, Mukaisi was again the culprit, losing a clear chance in the 50th minute.

Bandari’s tactician Douglas Mutua made three quick substitutions that totally turned the game and the pressure finally paid off.

Bandari who lost their last away match 3-0 to Thika, pitched camp on Leopard’s half and goalkeeper Onyango spilled a feeble Ali Abondo’s shot and Babuhija who had only been on the field for less than ten minutes was quick to pounce on it and level the scores.

The result prompted Leopards fans to chant ‘Selebwa must go’ as police had to escort the coach and players to the changing room.

AFC Leopards grabbed their first points in a 1-1 draw at Coca Cola Stadium against Bandari. But Leopards remain the only winless team in the 16-team log.

Dennis Mukaisi scored for Leopards in the 21st minute at the Coca Cola Stadium sending their supporters hopeful that perhaps they would witness their first win of the season.

But the fact that Leopards are quite deficient in many departments told as they were unable to hold on to their lead, surrendering it after Bandari substitute Rashid Babuhija scored in the 86th minute.

Leopards goalkeeper Charles Onyango let a ball bounce off his hands straight into the path of Babuhija who slotted it in.

After three rounds of the Premiership Leopards found themselves the only winless club, at the bottom of the 16-team log, and their supporters naturally looking for scapegoats.

Coach Gilbert Selebwa felt the anger as he was heckled and booed while making substitutions. The fans did not particularly like his taking off Farid Ali and bringing in Jessy Were.

The visiting side, Bandari of Coast Province were happy with the point as reward for the usual tiring long 484 kilometre road travel to play in Nairobi.

And seeing Selebwa's troubles, Bandari coach, former Kenya international midfielder Douglas Mutua, had some consoling words. "They [Leopards] have to be patient. They are mostly a team of hopefuls and the 'Ingwe' fans ought to be patient and give the coach time to mould a strong outfit."

Mutua's side slumped to a 3-0 loss to Thika United in their last upcountry visit and was this time happy with his boys. "We go back to Mombasa to prepare for our next match, at home to Western Stima, on Saturday."

Despite their lack of experience Leopards created enough opportunities for goals and Farid and the Zimbabwean Tafadzwa Dondo should have done better.

Selebwa said Bandari had the advantage of experienced players in key positions such as seasoned Kenya internationals Philip Opiyo and Abdallah Ali Breik and Ajai Ali.

"My players are inexperienced; given more time I believe they also can be some of the best in the league."