Yesterday Gor Mahia let in another five goals during a friendly match against El Merreikh of Sudan. And we thought it was just military teams (APR and Ulinzi) that could beat Gor!

One of the things noted however was that Gor having recently unveiled their logo played in a kit that had their old logo. Confusing?

Well, its a case of 'pot, kettle, black' since Leopards over the weekend also did the same! 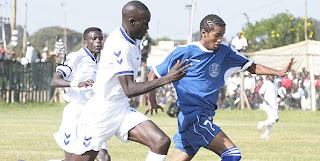 The club turned out kitted in the uniform they had first used against Gor during the Madaraka Day Cup game in 2008. Leopards had lost the match 2-1.

With the launch of the new kit and the re-branding of the club together with the sale of replica shirts, it was therefore surprising that the team turned out in the old kit, bearing the old logo. Hopefully, this one of the very few lapses that will characterize our new season.

It is bad enough for the Daily Nation (on Saturday 7th February) to use a logo of the team that has never been in use except by internet lovers having been first created at Kenyapage.com but even worse for the club to countenance this. 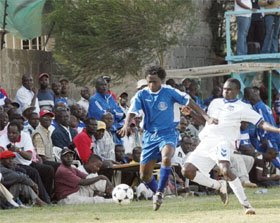 Unless of course, this was just a case of having to officially say goodbye to the old skins in front of its fans. Talk about established teams having trouble to let go of something. Incidentally, the official Gor Mahia website still has their old logo. Sigh.
Posted by Ingwe Fan at 8:49 AM