Hope Centre grounds in Kawangware has been banned from hosting any Kenyan Premier League matches.

The Independent Disciplinary and Appeals Committee (Idac) made the decision yesterday after an estimated 10, 000 fans brought down the perimeter fence and stormed the field, forcing the calling off of the match between hosts Nairobi City Stars and AFC Leopards on February 8.

Idac also fined Leopards Sh500,000 for their fans invasion of the field and a further Sh50,000 for causing damages to property at the stadium.

Hosts Nairobi City Stars were awarded a 2-0 win over Leopards. Stars were leading 1-0 by the time of the match abandonment.

" The field at Hope Centre is banned from hosting Premier League matches until it is sufficiently made secure for high profile matches.

It should first have strong perimeter fencing, immovable seats for spectators and outer walls among other precautions.

"AFC Leopards is fined Sh500,000 for fans invasion of the field and the sum is to be paid within six months. They are also fined a further Sh50,000 for damaging property at the stadium," said Idac chairman Moni Wekesa.

Idac has also fined Gor Mahia Sh500, 000 after their supporters invaded the field during their match against Ulinzi on February 7 at Greensteds School.

The independent body also suspended Gor coach James Siang’a from sitting on the bench for two matches besides a fine of Sh25, 000 for misconduct during the match.

The Greensteds field has also been banned from hosting future Premier League matches until sufficient security measures are put in place.

The ban of beleagured Siang’a is the latest set back to befall the tactician following fans’ call he be sacked following a string of loses.

This report also appears in the Nairobi Star 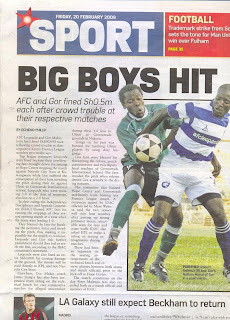 And the Nation carries the story too. Notice the reference about the Leopards coming back from the jungle!

It is not clear at this stage whether the Leopards will appeal this ruling noting their strongly worded match report on the Official website. From the ruling, it also appears that the sum of Kshs. 500,000 is not payable unless a similar offence is repeated within six months. The sum of Kshs. 50,000 is however payable within 30 days.