The Daily Metro quotes the KPL Managing Director as saying the Hope Centre ground had already been blacklisted. Apparently, it had been agreed in the past that when big teams were to play against NCS, they would use a different pitch. 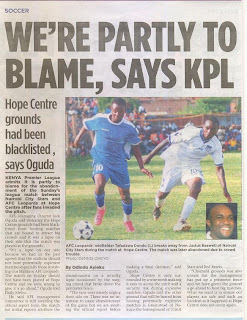 In the meantime, the Daily Nation quotes the NCS officials stating that only 2,000 fans had paid to enter the Ground.

City Stars general manager, Stephen Rigby, on Tuesday said post-match investigations by the club discovered three large holes that fans had created on the wire fence to enter the venue.

“We sold 2,000 official tickets for the match but as was clearly seen there were more than double that number watching the match. Most did not pay to watch what was an exciting match,” Rigby said.

By Tuesday evening, the KPL had received the referee’s report and were waiting for the commissioner’s report before making a decision.