Robin Toskin of the Standard carries a story that sources within Leopards have indicated that Gilobert Selebwa is to be replaced with Twahir Muhiddin this Wednesday.

Muhiddin is a former Harambee Stars coach who resigned after the national team took on sponsorship of a beer company and he found that in conflict with religious beliefs.

The story in the Standard reads:

AFC Leopards are set to formally sack their coach Gilbert Selebwa this morning and replace him with Twahir Muhidin ahead of Saturday’s clash with Gor Mahia.

Matters came to a head after Selebwa, who guided Leopards from the KFF Nationwide League to the top division floored a fan with a jab during a training session on the back of two losses and a draw, an official said.

The official who did not want to be named said Muhiddin, a former Harambee Stars, Bandari and Oserian Fastac coach would be unveiled today.

"We could not take Selebwa’s big headedness anymore. First, he surprised us by telling the management to pay him and players their salaries yet it is something we have done without fail," the official claimed.

Contacted, Selebwa admitted all was not well at the Ingwe den.

"I have heard something is cooking. I will wait before commenting. However, everybody knows how committed I am to Leopards. I wanted to succeed with this team. It is now in the hands of management. It is up to them to do what they think is good for the team," Selebwa said.

Muhiddin, who successfully helped Bandari beat off relegation said he would relish a chance to coach one of the big two clubs, Gor and Leopards but said there was no concrete offer to manage the latter.

"I got a call from the Leopards officials but I told them to give me three to five days to get back to them," Muhiddin said.

He added: "I think this is an opportunity for me given that I came close to coaching Leopards under the chairmanship of Onalo (Peter) and even Gor during Okudo’s (Leslie) time."

Selebwa is credited for reconstructing Leopards to win promotion from the lower league but his critics say he appeared to have rested on his laurels.

And, Leopards’ 1-1 draw at home to Bandari, a week after a 2-0 thumping at Western Stima only helped to accelerate the deteriorating relationship with the management.

But Selebwa’s pie really started crumbling way back in December during their Jamhuri Cup tie against bitter rivals Gor Mahia.

Despite dominating K’Ogalo and taking a 2-1 lead they failed to defend it when goalkeeper Charles Onyango dropped the ball for Habil Otieno to poke home the equaliser and Gor went on to win the trophy by the toss of a coin. 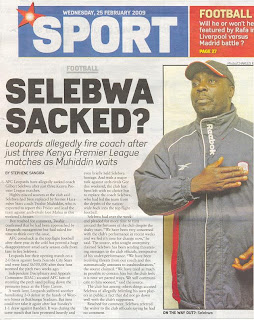 Meanwhile, Leopards plan another media launch this time for the 2325 SMS service.
Posted by Ingwe Fan at 10:00 AM