At the end of the weekend, that was the headline as Leopards were beaten 2-0 by Western Stima.

The pre-match hype had been as usual focusing on Leopards wide support in Western Kenya.

Some columnists even called it a Western Derby. Carol Radull to her credit thought Leopards would score a goal! For the second week running, she gave her prediction as a 2-1 loss by Leopards.

In the end, a meek Leopards succumbed 2-0 to Stima. The Standard carried the brief match report. 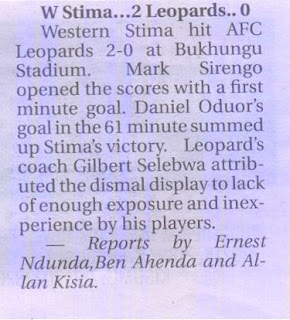 Meanwhile, Mathare United pleaded with a new set of fans: the Valentine Ladies to cheer them up against Zambian 'giants' (tsk tsk) Zesco United. They lost 1-3 at home. 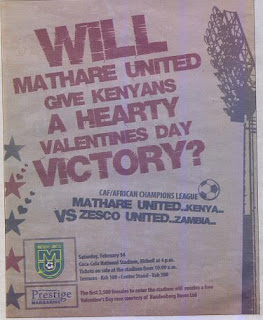 Supersport announced that the Leopards versus Gor match will be televised across Africa. With the current form of Leopards, and ready excuses by the coach (see Standard report above), Ingwe Fan is not holding his breath. Nation has the report.

The only consolation is that Gor Mahia has been hit by rotten from too. They play midweek in the League but the current positions are that Gor is second last whilst AFC is third last.

And still on Gor, a new song is out. Joluo Oparo Gor Mahia. Check this Standard report out. 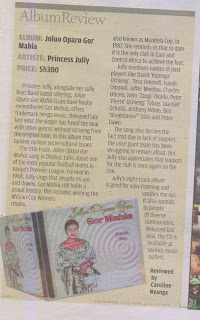