It is the start of a new season and the long suffering fans of AFC Leopards will be hoping that this is their year when they finally clinch the trophy that can make them the champions of Kenya once again. The last time that tag was used next to Leopards was during the year 1999 after the Leopards had won the 1998 championship.

It is a journey that Leopards have been taking part in for a long time and you can read about the story of the Leopards in a blog that was posted here last year.

This year, the outlook is positive with the Leopards having recruited established players who on any given day, can win any given match.

Allan Wanga is a former Golden Boot winner and though indications are that he may not play in the match today, the striking force is not entirely blunt. Victor Ochieng scored a basketful of goals in half a season last year. Mike Baraza was thought to have departed form the leopards but he made a quick return and it is probable that he will on the line up this afternoon.

Eric Masika made the BIG switch from Gor Mahia to Leopards this season. He joins a steady defence that last year did not lose a match in the league for the last fourteen matches. in fact, the last game they lost was against Masika's then team Gor.


In a strange statement, this blog has stated that the best thing to have happened to Leopards was that lose to Gor Mahia! Read it here.

Chemelil drew both matches with Leopards last season, effectively picking four points off the Leopards. But this is a new season and this is an entirely different ball game.

MichezoAfrika in a report filed by former Kenyanstar pundit Timothy Olubulu previews this match as follows:-

AFC Leopards have never beaten Chemelil since their come back to the league in 2009, whether home or away. The best result they have achieved against the sugar millers is a draw. Out of the six games played between the two clubs, Chemelil have won thrice and drawn thrice.

The most interesting bit of the encounter this season will be the input of Victor Ochieng and Abbas Kiwalabye. The duo moved to AFC Leopards at the beginning of the season from Chemelil. Ochieng who was one of the league top scorers last season was an important entity of the Sugar belt side helping them to an 8th place finish last season with Abbas also a key member of the Chemelil “Hit Squad”.

Both teams have their full squads at their disposal with Erick Masika expected to make a debut for Ingwe after shaking off an ankle injury from training.
Leopards’ attack line will also be boosted by the input of former HAGL striker Allan Wanga. Complementing Mike Barasa’s input in the attack line will be one of the most lethal in the league this season. But will they live to the expectations?

Chemelil are also boasting of some good additions to the club. Hadji Mwachoki was snapped up by Edward Manoah after he fell out of favor with Gor Mahia with only six months of action, with Wycliffe Opondo also joining his former team mate with the sugar millers.

Supersport in a report filed by Collins Okinyo states:-

AFC Leopards popularly known as Igwe will be hosting a Chemelil side that lost its most potent striker in Victor "Lotodo"Ochieng the player having moved to Leopards after a sparkling perfomance that saw him net ten goals for Chemelil.

However Chemelil coach Edward Manoah is not worried and hopes to turn the tables on Leopards who heavily recruited big names in Allan Wanga,Victor Ochieng and defender Eric Masika with coach Jan Koops hoping that the boardroom battles will not affect the team in the field of play.

Futaa in a report by Dan Ngulu states:

AFC Leopards will hope that former Chemelil Sugar stars unlock the secret codes that have prevented them from beating the millers since Leopards’ promotion in 2009 when the two sides lock horns in the Kenyan Premier League (KPL) on Saturday 11 February at the Nyayo National Stadium.


Leopards will be lining up defender Abbas Kiwalaabye and lethal striker Victor Ochieng who is also a Kenyan international after having signed the duo from Chemelil in the recent transfer window and will aim for a first win in six attempts against the millers. Leopards have managed just three points from a possible 18 in meetings with Chemelil in the past three seasons, all having come from draws after sharing spoils courtesy of 1 – 1 draws in both games last season and a barren draw in their first meeting of 2010. The first three matches have all ended in Chemelil’s favour.


Apart from drawing blanks in the Chemelil fixtures, another bad statistic that Ingwe will be aiming to put to bed is the fact that since 2009 they have lost all three of their opening games with two goal margins.

In 2009, they went down 2 – 0 to Western Stima at Bukhungu Stadium, they were then vanquished by KCB with the same margin in 2010 and the same was repeated when they met Tusker at the beginning of last season.


Despite the statistics however, Leopards go into this game as strong favourites not just for the match but also as title contenders but that is only on paper, the statistic after 90 minutes is what will count. The game is one of the season opening double header at Nyayo Stadium and will kick off at 1600hrs.

The line ups for the match are as per the report MichezoAfrika:-

Savvy Kenya, one of Kenya's top blogger has covered the pre-season story here. 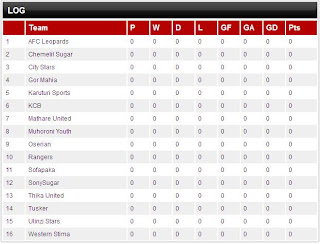 From the league table, it shows that this is the Top Two clash! Enjoy the ride.