The biggest news this week in the den was that the protagonists who have been fighting over the post of Chairman had agreed to a joint process of elections.

RE: AFC LEOPARDS SPORTS CLUB   SOC/ 6031
This is in pursuance to a meeting held on 16th February 2012 between yourselves, your representatives and this office.

At the said meeting, the following action plan was agreed upon as the way forward to resolve the wrangles that have persisted in your society.

1.             Immediate formation of a committee to oversee the harmonization of the two existing draft constitutions to a single document
2.             The following were appointed from each faction with the exception of Sammy Aina’s faction as members of the committee
(a)    Fredrick Lutta
(b)   Grace Khatasi
(c)    Moses Mukhwana
(d)   Joseph Bukachi (to act as secretary and coordinator of the committee)
3.             The committee has one week to harmonize the draft constitution and forward the same and its report to the Registrar by the 27th of February 2012.
4.             A special general meeting to be convened for 4th March 2012 for members to adopt/reject the amended constitution. At which meeting members of the Elections Board will also be appointed. The members register to be used at the SGM should be register as compiled by the Commissioner of Sports and the club in February 2011.
5.             Issuance of a notice for the Annual General Meeting scheduled for the 8th of April 2012
6.             Open up registration of members for three weeks from 5th March 2012 to 25th March 2012
7.             Publication and inspection of the members register from 27th March 2012 to 4th April 2012.
8.             Elections to be conducted at the Annual General Meeting on 8th of April 2012 to be presided over by Group 4 Security or Independent Electoral and Boundaries Commission at a venue to be determined.
9.             Returns of the elections to be filed with the office of the Registrar.

In effect, the parties and the Registrar have adopted widely the Petition by the Club of Leopards Active & wise Supporters Trust (Claws Trust) who had in December 2011 proposed that the club holds an SGM first before having its AGM. The Trust had also proposed an Elections Board to be elected at the SGM and for members register to be complied before the elections at the AGM. 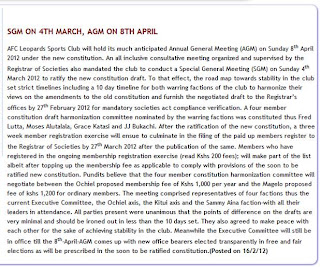 The clubs official website and the mainstream media both captured the effects of this letter. 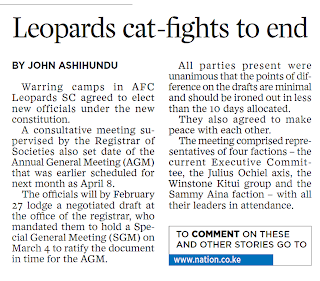 The only departure from the Claws Trust petition was the timelines which have been squeezed together instead of being expanded. Claws trust had expected the elections to be held in June.

It is however encouraging to see that the club has embraced the spirit of fairness which includes getting persons from outside such as G4S or IEBC to oversee the elections. Further, having an all inclusive board to make amendments to the constitution (hopefully, minimal amendments since the problem has been lack of constitutionalism more than anything else) means that the process is not exclusivist.

This is significant news that hasn’t been given as much coverage by the despairing Leopards faithful who seem to have decided to give the club politics a break and concentrate on the performance of the first team in the ongoing Premier League.   - FN

There was a dark cloud hanging over the Leopards last week and that was the ITC. Everyone mentioned the ITC and for a moment we didn’t even know what it meant. Ingwe Travelling Club? Well, no. It was the International Transfer Certificate. That was the document that was the reason Allan Wanga, Leopards number 9 didn’t play in the first match against Chemelil.

Thankfully, this was sorted out and the news was received with jubilation by Leopards fans in Week 7 as Wanga got the all clear to feature against Mathare United. - VB 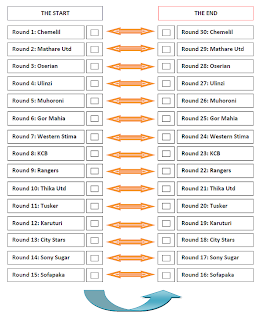