Bob Munro was stressed, feeling threatened of losing his job and his lifestyle, since his abusive boss hired a Stanford geek to work in their company. Bob promised his wife Jamie Munro, his teenage daughter Cassie Munro and his young son Carl Munro to spend vacations in Hawaii, but his boss demanded that he prepares a presentation and attend a business meeting with the owners of a family company in a merging operation scheduled in the same period. Bob hid the truth to his family, rented a recreational vehicle and tried to convince his dysfunctional family that a road trip to the Colorado Rocky Mountains would be good to bring old values back to their family.

In case you are lost, then you haven’t watched the movie RV starring Robbie Williams as Bob Munro.

But the Bob Munro we are talking about isn’t the same one. This is Robert Munro, who is a Canadian who changed the face of Kenya (or so it is said).

But for most people Bob Munro is Mathare United and for a long time, Mathare united has been Bob Munro.

In his paper called Greed Versus Good Governance, Munro states that the club was founded in 1994 which was thirty years after the formation of AFC Leopards SC. It catered mainly for the youth in the Mathare slum which led to the annoying ‘Slum Boys’ reference by the Kenyan press.

The club enjoyed order and organization in an era where community clubs, and in particular Leopards and Gor Mahia were floundering after they lost the state backing though the hiring of its players in state corporations.

Mathare United was able to attract sponsors and was soon playing football in the lower leagues and taking part in Cup competitions.

Munro stated that they found the lower league corrupt with the team losing many of the away matches due to compromised referees. But in 1998, this apparently changed. He says:-

For the 1998 season, one of my friends kindly donated a video camera to our team. It wasn't one of the small and light modern models but a huge and clunky camera with a shoulder bag for the heavy battery pack. That year our Team Manager became really fit. During all our away matches he ran up and down the sidelines with the camera constantly pointed straight at the referees.

Not used to being movie stars, the referees became far more cautious and correct. But we had a dark secret. What the referees didn't know and never discovered was that the camera was broken. That camera never worked but the technique did. In 1998 Mathare United earned more points from away matches and won promotion to the Premier League. But that then exposed our team - and me - to new and tougher forms of corruption which couldn't be countered with only a broken video camera.

Of course this seems a bit over the top since the facts seem to have been different. In 1998, Mathare United finished FIFTH in the Eastern Zone of the Super League behind KCB, Red Berets, Co-op Bank and Postbank. The second tier league to the Premier league was arranged in two zones and the top five finishers in the Western Zone were Brooke Bond, Kisumu All Stars, Gilgil Telcom, Pan Paper and Nakuru Police.

Not all these ten teams (five from each zone) qualified for the League. Mathare United was parachuted into the league courtesy of some questionable decisions by the ruling football authorities who reasoned that because Mathare had won the Moi Golden Cup for that year, they needed top flight football to horn their skills in the continental ties. At first, their admission into the league was unfairly at the expense of Red Berets but later, both teams remained in the League.

When Mathare United was admitted into the Premier League in March 1999, few would have imagined that it was going to lead to a blossoming rivalry with Leopards, then among the two or three undisputed kings of Kenyan football. That set the stage for the Cup Champions of 1998 against the League Champions of 1998 to play in the same League.

In the first league clash between the teams in June 1999, Leopards emerged the victors and it looked like the Slum Boys were there to make up the numbers. But they rallied and in fact beat the leopards in the second leg played in November of the same year and finished eighth in the league as Leopards finished fourth.

For Munro, this was just the beginning of the transformation of the Kenyan football scene. In 2000, the league was played in two Zones and his team won its Zone whereas Leopards finished fifth in the twelve team Zone. In a final mini-league of the top four teams, Mathare finished fourth.

But Mathare was again in the Moi Golden Cup Final for that year meeting … who else but AFC Leopards. Munro’s team won the Final beating the sad Leopards 2-0 in a result that didn’t shock many.

In 2001, whilst Mathare played in the continental matches, Leopards was cooling its heels at home. The superiority over Leopards continued in the 2001 league as Mathare finished second whilst Leopards were placed fifth.

However, there was the Cup final again and Mathare United was in the final again and the team they met … was none other than AFC Leopards again! Clearly a rivalry was brewing between the teams. This time, Leopards avenged the loss in the previous year’s final by beating Munro’s team 2-0.

Having finished second in the league that year, Munro gave a funny anecdote of what happened next:-

The last awards ceremony was for the 2001 season. KFF officials presented the winners with trophies but no cash awards. Mathare United won the Premier League Runner-Up trophy. The Mathare Captain and Assistant Captain were still admiring their new trophy just minutes after collecting it when the owner of a local sports store approached them, presented his business card and asked "KFF just borrowed these trophies from my shop this morning for this ceremony. Could I please have the trophy back now?"

That seemed to spur him on to act. But as he acted, his team was continuing its impressive run over the Leopards. Dennis Oliech, arguably Kenya’s best ever player was in the ranks of Mathare United and in 2002 he was involved in a contentious encounter with the Leopards where he was sent off after he had scored and the match was later abandoned when the Leopards fans disputed the referees decision to disallow an equalizing goal by Francis Xavier. Leopards took the award of this match to Mathare bitterly and in fact went to the High Court through lawyer Eric Mutua seeking to reverse the decisions. Mathare had beaten the Leopards 2-0 in the first leg and it seemed the Leopards were seeking revenge on the team and were willing to go to all lengths to restore their wounded pride.

Luckily for the building bad blood, the teams were not placed in the same Zones for the 2003 and 2005 leagues and thus did not play each other.

To his credit, Munro had a great relationship with Leopards then Chairman Voltaire Kegode and they exchanged cordial e-mails. 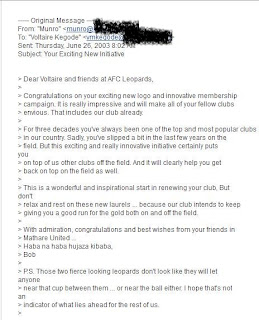 There was confusion galore in the 2004 league and according to Munro in his paper on the Kenyan soccer scene, he states:-

In late 2000 the Mathare United officials took a leading role in starting inter-club consultations and launching unprecedented joint initiatives by clubs which led to the presentation to KFF of over 50 constructive reform proposals for saving and improving Kenyan football. When KFF ignored those proposals and especially those on financial transparency and accountability, Mathare officials again took the lead with other clubs and invoked Article XIV of the KFF Constitution on the right of the KFF member clubs to inspect the KFF accounts. For the next three years the Mathare United club and its officials remained among the leaders in the reform activities of the Inter-Clubs Consultative Group (ICCG) and its corporate successors, the Kenyan Premier Football Group Ltd (KPFG) and Kenyan Premier League Ltd (KPL).

In 2006, Leopards seemed to have gotten the better of Mathare United beating the so called Slum Boys 2-1 in both league encounters. However, shockingly, Leopards were relegated from the league that year in a series of unfortunate events that most Leopards fans blamed on one man: Bob Munro.

In a report on a local football website, it was even quoted that the current Football Kenya supremo Samuel Nyamweya had poked fun at some Kenyan football administrators who couldn’t do anything without Munro. The site reported:-

… Shabana FC Chairman Sam Nyamweya shot up as retorted to Thika Uniteds' Gerald Chege "You are waiting for Bob Munro to come and make the decision for you?" That seemed like a cue to Gor Mahia chairman Andrew Sule who immediately shot up to his feet in typical Gor Mahia style of solving issues physically, folding his sleeves and charging towards the KPL official intending to beat him.

When Leopards were relegated, most Leopards fans thought Munro was trying to send their team to its deathbed so that his Mathare United team could assert control over the soccer scene. The joke often made by Leopards fans is that he converted the FIFA slogan: Kick Racism Out Of Football to Kick Leopards Out of Football. 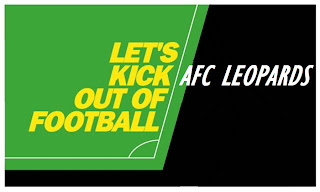 At some point there were people who wanted Munro deported. There were also claims his team had fielded an ineligible player and ought to have been relegated. But in the end, the leopards were the one that sat out the League.

In fact, whilst Leopards was in purgatory, Mathare United won its first Premier League title, to rub salt in Leopards fans wounds.

And Munro grew into a colossus. FIFA seemed to consult him and take his word on the state of football in Kenya. In 2010, there are those who said he was behaving as if Mathare United was the only team in Kenya. His club even benefitted from FIFA projects. It looked like they were going to rule Kenyan football for a long time as the Leopards seemed to be dying.

Fast forward to now and the Leopards seem to be back. The financial muscles that Mathare United had over the Leopards during those dark days seem to have vanished.

Though Mathare holds a slightly better record to Leopards since the Second Coming of the Leopards, the teams have drawn half the matches played.

2003: AFC Leopards and Mathare U. in separate zones

2005: AFC Leopards and Mathare U. in separate zones

2007: Relegated AFC Leopards did not play in any League.

2008: AFC Leopards and Mathare U. in separate Leagues.