I Accuse The Press

Kenyan journalists are often accused of being a shallow lot that do not ever try to get balanced news in the newspapers thus leading to very unresearched articles appearing in print. This morning, we woke up to the Standard newspaper screaming: 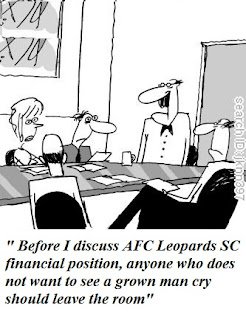 This headline first pre-supposed that our team has ‘woes’ which is far from the absolute truth. Woes are described as ‘deep distress or misery, as from grief; wretchedness; misfortune; calamity’.

Each community of persons has differences and the differences at Leopards are far from distressing or a calamity.

The wrangles at Kenya Premier League (KPL) side AFC Leopards took a new twist yesterday when a section of fans dismissed the club’s financial returns published on the local dailies on Friday, claiming it was flawed and demanded answers from the outgoing office.

Here, the journalist shows that this is a section of fans; and does not even say how many fans comprise this section of fans. Just this statement alone would have made the headline be more credible if it indicated: Some AFC fans reject financial statement.

The club has been dogged by infighting that has seen them hold two elections within two months and the latest development is likely to fuel the rift.

No elections have been held at the club. Just a simulacrum of elections. This is the reason the Registrar of Societies has not recognized any of the so called elections. To therefore present this as a ‘fact’ is sheer idiocy.

Led by Kenya Football Fans Association (Kefofa) chairman Joash Amuhaya, who is also a self proclaimed diehard Leopards’ supporter, the fans said the club needed sound structures to ensure transparency in the running of its finances.

Here the journalist tries to throw doubt in the KEFOFA gentleman by saying he is a ‘self proclaimed diehard Leopards supporter’. Surely, if it is not a fact that he is a diehard supporter or recognized as such by his peers and that he is merely self proclaiming himself, then why give the next statement from him such weight?

According to the published balance sheet, the club had a deficit of Sh 1,577,638, a figure that the fans claim cannot be genuine since the club received a major sponsorship deal from Mumias Sugar.

The key word here is CLAIM.  To claim is to assert in the face of possible contradiction. The fans are basically making a supposition that just because the club received sponsorship, then it cannot have an excess over expenditure from the income. Surely, a journalist who deals with matters sport will easily see that this isn’t the absolute truth as even teams with huge sponsorships have been known to run into debt. The saving word for the journalist here is CLAIM. 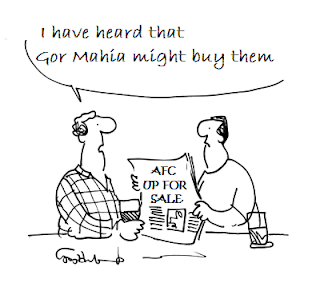 They also questioned the whereabouts of the Sh 3 million Ingwe TV rights payment from local pay television Smart TV, since the figure did not appear as part of the club’s income in the balance sheet.

By insinuating that the missing heading means the money is lost is taking this a bit far. It appears the journalist is joining in the condemnation without having any facts. There is mention of extra ordinary income of Kshs. 4.7 million. What if the Kshs. 3 million is part of this package? Rather than  ask what comprises the figures, an accusatory language is encouraged by the reporter.

“It was made clear that Mumias would give the team Sh 15 million last season then increase it to Sh 25 million in 2012 and Sh 35 milion in 2013, so how come the figure we are seeing in the balance sheet for 2011 is Sh 11 million? We also want to know where the Sh 3m from Smart TV went to because it is not indicated anywhere,” said Amuhaya.

One of the things people don’t realize is that by always going to the press and crying wolf and giving the club bad publicity, even the Kshs. 35 million we expect to get from Mumias Sugar will dry up. Some of the shareholders of Mumias Sugar may wonder why the company gives a rogue club sponsorship money if it is wasted. It is a case of biting off your nose to spite your face.

He added: “The sale of replica jerseys has also been put at Sh 948,500 and since a jersey costs Sh 1,500, it means only 632 fans bought the jerseys the entire season. We are not blind because the stadium is always full with fans wearing the team’s jerseys and we want answers to such things.”

This is elementary. Of course there are costs of purchase, import, retail and so on that are loaded to some merchandising items before the profit is worked out. The person who read the statement may have said, they are not blind, but they aren’t that clever either.

The fans also questioned the Sh 7 million raised from gate collections the entire season, noting that it was unrealistic after a single match against Gor Mahia fetched more than Sh 3 million.

Again, any reporter will need to know about a club he is writing about before carrying some blanket statements such as this one. The clubs official website has carried some stories about the gate collections in the past.  And even the website IngweFans.com carried a statement that said: The match had the highest gate collection for AFC Leopards in the whole season at a sum of Ksh. 3.06M - combining all other home matches may not even get close to the gate collection! That appears to be someone who is close to the club speaking not wild rumours. In some matches such as leopards v Western Stima, the club raised a paltry Kshs. 141,000! Just a Google search can get you those figures. Or this.

Outgoing chairman Alex Ole Magelo could not be reached for comment, but documents signed by assistant Secretary General Geoffrey Mulanya on behalf of the club, indeed confirmed that the club received Sh 3 million from Smart TV, a figure which has been omitted in the published financial statement.

By stating that the figure is omitted, it appears the journalist knows what each figure in the statement stands for. Quite a funny way to jump to conclusions when there are always two sides to a coin or every argument.

The fans also called on the Registrar of Societies to stop meddling in the club’s politics and demanded a certificate after the elections that were held a fortnight ago.

Again, this is very basic. The Registrar of Societies is the authority that is mandated to deal with any disputes at the club including disputes on its elections. For the journalist to simply let through a statement that calls upon the Registrar ‘to stop meddling’ is quite unfortunate. Everyone ought to know that our constitution grants people freedoms to go to court in case they think that any public officer is over stepping their mandate. But rather than challenge the said fans with questions that are reasonable, the journalist takes the shirt cut which is to simply swallow the line, hook and sinker and bolster the picture created to the public that the club is in ‘woes’ = ‘calamity’.

“The Registrar of Societies called for elections but the winner is yet to be declared, we don’t understand why. We demand the certificate so that by the time the Kenya Premier League is starting, the team can focus on playing football,” said Amuhaya.

The team has been playing football, and the journalist concerned will understand that the team has been in camp in Mumias and played in a tournament, the Ashitiva Cup which it won. It wasn’t playing volleyball or netball. It was playing football. There are other misstatements that are created by the simple sentence ‘The Registrar of Societies called for elections…’ In fact, the Registrar did not call for elections. The Registrar called for a Notice of the Annual General Meeting to be issued; a faulty notice was issued; the person who issued the notice then didn’t even attend the ‘elections’ after the same Registrar found the notice defective and asked to be given time to give a ruling on the matter. Any self proclaimed diehard fan of the club would be serving the interests of the club better by being patient rather than being a loud mouth that goes to the press to show off how he or she is the only one who can give their thoughts about what is happening at the club. But it calls to questions the intentions of some journalists who are more excited about creating fear and panic amongst Leopards fans and amusement amongst fans of the rival teams with sensational reporting.

For a more balanced view on the Accounts, read this. But don't read this.