Leopards began the 2011 Premier League campaign with a 2-0 away loss to Tusker FC at the Nyayo National Stadium. Both goals were scored by former Leopards old boy Dennis Mukaisi in the second half.

Tiema:         Made a few saves but then it got into his head that he was the star of the show. Responsible for the howler in the 41st minute that Imbalambala cleared on the line. His positioning for the second goal was terrible and misjudged the run by Mukaisi.  Rating 3/10
Shamalla:      Had more than five bad touches in the first half alone. Appeared lethargic and didn’t give confidence to the defensive line at all. Was caught ball watching in the second half. Rating 4/10
Milimu:         Part of the shaky defensive play offered by the team today. Rating 4/10
Imbalambala: Was present in the match through out. Saved the blushes of the team when he cleared from the line. Didn’t get to use his height in the set pieces as the team created few setpieces. In the first half alone, the team had not a single corner. Rating 7/10
Muyoti:        Captain for the day and his experience showed. Lacked the pace at times but his touch was assured. Got into a goal scoring opportunity and almost scored. Rating 5/10
Cokie:          Four words. Could have done better. Rating 4/10
Selenga:       Had an absolutely gutless performance and this may not be entirely his fault He was starved of service in the first half and even dropped back into midfield to collect the ball. However, his touches and shots in the second half when he got service were extremely un-Demonde like. Wasted opportunities with either feeble shots or skying his shots. Rating 4/10
Wandera:      Felt lost at some points of the match. Was the first one to be subbed before the hour mark. Rating 3/10
Tumba:        Was hasty in his play and broke the rhythm of the Leopards in the first half when Leopards enjoyed a superior possession than Tusker. Needs to get on target frequently. Rating 4/10
Kinjie:         Had a slow game. He had no greater interest in winning the ball or chasing down the ball as his opponents. Rating 5/10
Aluvisia:       Anonymous for most of the game. No combination with the other players. Rating 4/10


Tusker 2 AFC Leopards 0
Since moving from AFC Leopards the previous season, Dennis Mukaisi's stay at Tusker has been marked by promise rather than delivery as a striker. But the new season got off perfectly for him with two well executed goals.
First in the 64th minute he capitalised from a quick free-kick before outpacing defender Martin Imbalambala shooting low past an advancing Barnabas Tiema in Leopards goal.
Mukaisi was again put through on the right flank by Paul Were to shoot from a narrow ago and beat Tiema in the 75th minute.
There would have been a hat-trick for Mukaisi. In the 42nd minute he had lobbed over Tiema but Imbalambala ran back managing to scramble the ball of the line.
But overall it was a poor game from both teams. Wasteful passing was the hallmark. But the worst were Leopards who did not have a single player who could calm down, caring about possession.
The amount of time players hurled bodies at each other, spending a lot of time on the floor, was incredible.
Imaginative passing was rare, nervousness or utter panic being the reaction of Leopards nid-fielders and forwards most notably Evans Wandera and Dimonde Selenga.
And a frustrated coach Robert Bollen seemed to have been painfully taking in every bit of this at the touchline.
Still, Tusker coach Sammy Omollo said: "My players showed character and determination. Leopards had the supporters. This is a good start for us and we hope to continue with the same spirit”.
TEAMS:-
TUSKER - 1. Boniface Oluoch: 17. Noah Abich, 28.Isaac Otieno,18. Joseph Shikokoti, 5. Jockins Atudo, 22. Maurice Odipo (13. Frederick Ojwang', 50'), 12. Japhery Oyando (captain), 21. Victor Ali Abondo (14. Paul Were, 55'),10. Dennis Mukaisi ,11. Joseph Emeka, 24.Levi Muaka (6. Crispin Olando, 65')
Reserves not used - 29. Duncan Ochieng', 15. Humphrey Okoti, 3. Moses Odhiambo, 9. George Midenyo
Scorer - 10 .Dennis Mukaisi 64', 75')
Coach - Sammy Omollo
AFC LEOPARDS - 19. Barnabas Tiema: 33. John Shamala,15. Milton Milimo, 4. Martin Imbalambala, 6. Nicholas Muyoti (captain), 23. Abraham Cokie, 17. Demonde Selenga,16. Evans Wandera (2. David Seda, 51'), 8. Laurent Tumba (9. Hugo Nzoka, 73'), 18. Salim Kinje (21. Emmanuel Tostao, 72'), 14. Silas Aluvisia
Reserves not used - 1. Patrick Matasi, 3. John Amboko,12. Augustine Etemesi, 20.Abdul Shaban, 5. Edward Wafula, 22.Bernard Magoli
Coach - Robert Bollen
The Standard had a back page full story 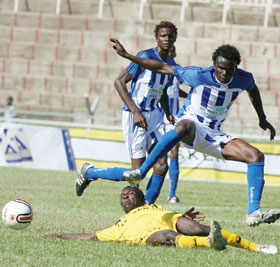 By Robin Toskin
Tusker ensured Mumias Sugar-sponsored AFC Leopards would not have a sweet start to the 2011 Kenyan Premier League campaign with 2-0 win at Nyayo Stadium.
It was left to former AFC Leopards striker Dennis Mukaisi to do an inside job, which he did with gusto, netting a brace.
The double brought to three goals the number of goals Mukaisi has scored against Leopards, the other coming in the 4-2 skinning of Ingwe last season in Mumias.
"The goals will motivate me going forward. I hope to banish the frustration of last season," Mukaisi said after the match.
Leopards will be grateful for some sterling individual performance of veteran Nicholas Muyoti and goalkeeper Barnabas Tiema for keeping the score line respectable.
After Liberian Abraham Cokie lashed at the upright with a speculative 30-yard shot in the eighth minute, Leopards’ challenge fizzled, allowing Tusker exert their influence.
Mukaisi charged down on goal only to find Muyoti in resolute mind with a vital block on 28 minutes. Wearing the captain’s armband on his return to the side he led to the Moi Golden Cup at the turn of last decade, Muyoti displayed leadership quality Leopards have lacked in recent months.
But when his defence was breached, Tusker found an alert Tiema as was in the 70th minute when he kept out Fred Ojwang’s flying header from close range.
However, there was little he could do in the 65th minute when Mukaisi peeled away from Martin Imbalambala on the left flank following a quick free-kick.
Mukaisi showed composure to slide in under the advancing Tiema. It was a costly positioning of the Leopards defenders despite a stern warning in the 41st minute when the former St Anthony Kitale raced through the heart of the back four to loop the ball over Tiema, only for Imbalambala to hoof it away on the goal line.
Leopards struggled to craft a response, but Tusker needed no second invitation when Mukaisi’s cross- shot fizzed through Tiema’s near post to cap a winning start for coach Sammy Omollo.
"It is an encourage result, but I think Leopards gave a good account of themselves since we did not have an easy game," Omollo said.
Leopards’ coach Robert Bollen insisted it was not a bad performance despite his forwards Demonde Selenga and Laurent Tumba time and again coming unstuck against an organised Tusker defence.
Leopards face Gor Mahia’s conquerors Rangers FC next weekend, needing victory to keep on the boil ambitions of their faithful.
Whilst the Nation kept it short:-
Former AFC Leopards star Dennis Mukaisi returned to haunt his former club as ‘Ingwe’ fell 2-0 to Tusker in the Kenyan Premier League on Sunday.
Standings
Posted by Ingwe Fan at 6:28 PM