With elections set for Sunday 13th, February 2010 the candidates have been all over making a push for their agenda. We have heard them on the radio, especially Radio Jambo; we have seen them on TV, especially Citizen TV
We have read about them on Facebook as their foot soldiers urge us to vote for them.
We also saw the Magelo allied afcleopards.net sensing victory for their candidate in a hurriedly written piece with the memorable line: He did what many Luhyia politicials who wont to claim honourship of the club cound not do. 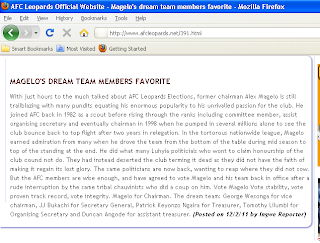 We have also seen the newspapers profiling the elections in detail especially in the Star. 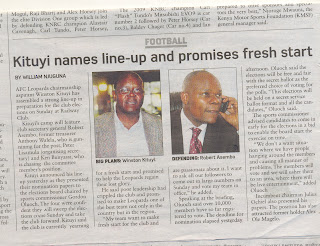 And the Star again! 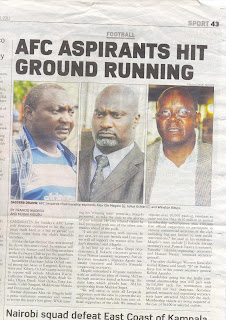 And the Standard even gave it a full page! 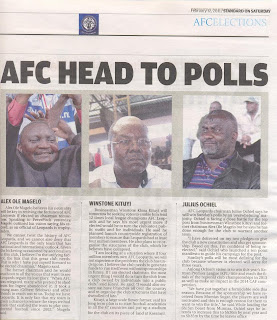 Part of the profiles were detailed here by the Standard:-

ALEX OLE MAGELO
Alex ole Magelo believes his neutrality will be key in reviving the fortunes of AFC Leopards if elected as chairman tomorrow. Speaking to FeverPitch yesterday, Magelo outlined his vision saying his record, as an official of Leopards is trophy-laden.
"We cannot twist the history of AFC Leopards, and we cannot also deny that AFC Leopards is the only team that has national and international outlook. Given the bickering occasioned by sectionalism in this club, I believe I’m the unifying factor, the link that this great club needs. That is why I have put myself forward to be elected chairman," Magelo said.
The former chairman said he would reach out to all the voices that want to see Leopards regain its lost glory. "When AFC was relegated, many who pretend to shed tears for Ingwe abandoned it. It took a young man (Gilbert Selebwa) and other friends to reach out to us. Today we have Leopards. It is only fair that my team is given a chance to retrace the steps we had made that enabled the team to play continental football since 2002," Magelo said.
Dream team
NAME: Alex Ole Magelo
POSITION CONTESTED: Chairman
Magelo’s Team: Chairman: Magelo
Vice-Chair: George Wesonga
Sec Gen: Josphat Bukachi
Treasurer: Patrick Keyonzo
Asst Treasurer: Duncan Angode
Org Secretary: Timothy Lilumbi
Achievements: As assistant Sec Gen, AFC won: Cecafa Club Champions 1997
KPL in 1998, Moi Golden Cup 2001
As Chairman: AFC regained KPL status in 2008
— Won FK Cup in 2009
— Introduced concept of replica jerseys and assorted items for fans
— Set up club website
— United fans and initiated membership registration that hit 10,000 people
Immediate Goals:
—Unity: Too much energy is pulling in different directions
—Assemble the best technical bench and give it a freehand
— Ensure we have a very disciplined playing Unit
Long Term
—Build a strong unit by developing players through satellite clubs
WINSTONE KITUYI
Businessman Winstone Khisa Kituyi will tomorrow be seeking votes to lead 12 times local league champions AFC Leopards. He says his most urgent move if elected would be to turn the club into a public outfit.
He said he planned launch countrywide registration of members to ensure that Leopards had at least four million members. He also plans to re organise the structures of the club, which he believes have collapsed.
"I am looking at a situation where if four million members own AFC Leopards, we will not experience the problems the club has undergone. I believe the club needs to generate funds to run itself even without sponsorships in future. If I am elected chairman, the most urgent thing I would do is turn the club from a club owned by individuals into a public club," said Kituyi.
He said: "I would also ensure we have branches all over the country and re-organise the club structures that have dwindled of late."
Kituyi, a large scale flower farmer, said his long term plan is to start football academies in all the 47 counties and put up a stadium for the club on its piece of land at Kasarani.
Dream team
NAME: Winstone Khisa Kituyi
POSITION CONTESTED: Chairman
Kituyi’s Team: Chairman: Kituyi
Vice-Chair: Peter Lisamula
Sec Gen: Robert Asembo
Dep Sec Gen: Geofrey Mulanya.
Treasurer: Joseph Murila
Asst Treasurer: Anthony Walela
Org Secretary: Fredrick Luta
Members: Ken Bunyasi
Highlights:
— Kituyi is a businessman and horticulture farmer.
— He said his long-term plan is to start football academies in the 47 counties and to help AFC Leopards put up a stadium on its land at Kasarani, Nairobi County.
— He believes the club needs to generate funds to support itself and to stop relying only on sponsorships in future.
— He forsees a situation where if four million members own AFC Leopards, the club would not have to undergo the problems it has faced.
He is out to turn the club from one owned by individuals to one owned by the public.
JULIUS OCHIEL
AFC Leopards chairman Julius Ochiel says he will win Sunday polls by an ‘overwhelming’ majority. Ochiel is facing a close battle for the top post from businessman Winstone Kituyi and former chairman Alex ole Magelo but he says he has done enough for the club to warrant another term.
"I have delivered on my two pledges – to give the club a new constitution and also get sponsorship. Based on this, I’m confident of being re-elected," said Ochiel, who launched a ten point manifesto to guide his campaign for the post.
Sunday polls will be most defining for the club because whoever is elected will serve for three years.
Among Ochiel’s vision is to win this year’s Kenyan Premier League title and reach the finals of the regional club championships in 2013 and make an impact in the 2014 CAF competition.
"We have put together a formidable side this season. Because of the sponsorship we have received from Mumias Sugar, the players are well motivated and this is enough reason for them to want to win the title," he said.
While lauding the Sh15m boast from Mumias, Ochiel says he intends to increase this to Sh30m by next year and to Sh35m when he leaves office.
Dream Team
Chairman : Julius Ochiel
Vice Chairman: Caroline Andisi Mayunzu
Sec Gen: Catharine Omanyo
Asst. Sec Gen:
Alutalala Mukwana
Treasurer: Amin Walji
Asst. Treasurer: Tony Luvanda
Org Sec: Frankline Imbenzi
Highlights/ Achievements
1.This is a highly youthful team with an average age of 33 .
2.For the first time, AFC top leadership is going to comprise of students for I believe the youth are the leaders of today
3.Also for the first time AFC Leopards’ top leadership will take into account gender sensitivity with a third of its top leadership being women. This of course is in line with the spirit of the country’s new Constitution.
4. I would like to remind members of my achievements as AFC Leopards chairman which include:
(i) The new constitution
(ii) Mumias Sugar’s 60 Million sponsorship over a three year period
(iii) Medical cover with AAR for both the playing unit and the technical bench

Ingwe Fan reserves his comments on this.

The Nation has the story here

Twenty six candidates have been cleared to contest for posts during the exercise that will see a new office take charge for the next three years under Mumias Sugar Company (MSC) sponsorship.
Gordon Oluoch who is the chairman of elections board and also the Commissioner for Sports said it was all systems go as they are set for polls upon the deadline for registration of candidates and members that ended on Thursday February 10.
Three candidates have been cleared to go for the chairmanship post. They include the incumbent Julius Ochiel Sikalo, former chairman Alex Ole Magelo and new comer Winston Khisa Kituyi.
The vice chairman's seat has attracted three candidates who are former AFC leopards organizing Secretary Peter Lisamula, Carolyn Mayunzu and George Ojwang' Wesonga
Four candidates are in contention for the secretary general's post and they are the immediate former holder of the post Robert Asembo who got a reprieve to contest for the post after being suspended, the acting secretary general Catherine Omanyo, Josephat Jacques Bukachi and Caleb Sunguti.
Geoffrey Ekesa Mulanya and Alutala Mukhwana are the aspirants to be cleared for the deputy secretary general's post.
Amin Ashif Walji will defend his post against his sole opponent Patrick Ngaira Keyonzo.
The club's fomer treasurer Duncan Angode together with team's former secretary general Anthony Walela and Tony Luvanda will vie for the assistant treasurer's position.
Ex international and AFC Leopards former defender Josephat “Controller” Murila, former organising secretary Timothy Lilumbi and boxing promoter Franklin 'Kuka' Imbenzi will be gunning for the organising secretary's post.
Outgoing organising secretary Victor Okiya Dindi, Kenya Secondary Schools Sports Association (KSSSA) Nairobi province vice chairman Ken Bunyasi, Fredrick Luta, Melab Atemah Lumalah, Gaylord Okinda and Shem Omondi are in contention for the three committee members posts up for grabs.
The board banned the ceremonial entry of candidates where they are carried as traditional isikuti dance and songs are sang for security reasons.
Oluoch said the elections will be conducted by secret ballot and only registered members will be allowed into the venue.
“All members shall be seated by 9am when the Annual General Meeting (AGM) will be called to order. The gates will remain closed till the end of the exercise, said Oluoch.
The commissioner said members must vacate after voting and only candidates and their accredited agents will be allowed to access the ballot counting hall where every aspirant will be represented by two agents.
He said candidates and their agents will no be allowed to campaign and canvass for votes within the precincts of the venue.

“As the chairman of the elections board , I am the only one who has been empowered to announce the official results,” he said.
He warned that any person contravening the rules and regulations shall be apprehended by the elections board

Look out for the Letter to The Chairman in an upcoming blog. Ingwe Fan wishes all candidates the best of luck in the election tomorrow.

As for Ingwe Fans, we hope you have your cards ready and will choose a candidate who steers our team to greater glory! 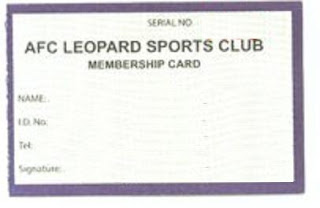