Today, Ingwe Fan wishes to pay respects to a fan who is not here with us today. 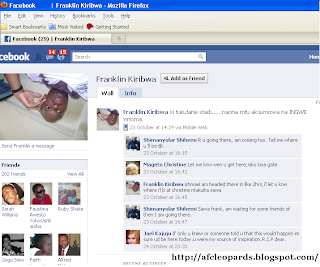 On 23rd October, 2010 Franklin Onimu Kiribwa, a Leopards fan posted a message on his Facebook page to the effect:
Si tukutane stadi. Naona mtu akiiumizwa na INGWE vinoma. (Roughly translated as: Why don’t we meet at the stadium. I can foresee AFC Leopards thrashing ‘someone’ thoroughly)
The message was understood to be a message in support of AFC Leopards and that someone was a reference to Gor Mahia.
Sadly, Franklin was amongst the fans who tragically died at Nyayo National Stadium that evening when a stampede was reported to have taken place. This was widely reported in the daily newspapers, online media reports. 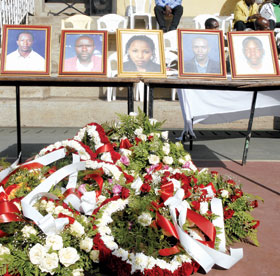 Portraits of victims of October 23 stampede at Nyayo National Stadium. From left: Victor Juma Okoth Otieno, David Oundo Ochieng’, Winnie Karimi Kinyua, Franklin Onimu Kiribwa and Stephen Ochieng Onyango . [PHOTO: STAFFORD ONDEGO/STANDARD
A memorial service was held on 3rd November, 2010 as reported on the Gor Mahia website. Gor had been the home team for the tragic match.
This sad and tragic incident where a young and enthusiastic fan’s life was cut short is still fresh in the memories of Leopards fans. There are people who call themselves diehard fans of the team but you do not ever get to think that you can die hoping to watch our team as Franklin did.
This does not man of course that we are lessening the deaths of the other fans and it is on this premise that we still condole the families of the others who lost their lives that day, even if some of them may have been fans of the opposing team.
The deaths, however, did happen and though some of us may feel that it is the past, for the families of the fans who passed on, that incident will forever remain etched in their memories.
For those of us who may have interacted with Franklin and who may tear up when they see that his death is ignored by sections of the fans, we have to take courage and know that if the fans stood together and stayed focused, and learnt from the tragic death, then this death would not have been in vain.
For us remaining fans of Ingwe, we have to think positive so that such incidents do not occur. Even as we continue to support the team, we have to think about the ways in which we can assist either the families of our fellow fans who may have perished during the disaster. I do not know if any of the other persons were supporters for Leopards but at least from the Facebook  post of Franklin, we know he was one of us!
Issues of the security of fans at the stadium need to be addressed, and if the officials of the team do not do it, then fans have a challenge to speak about it. This is a lesson that we can learn from the passing of Franklin. When people speak about Season Tickets and the need to mark the stadium for the seat allocation, it is informed by such incidences. When people say we need to own our stadium, it because this could have easily happened at a Leopards home match.
We were promised that an investigation report that was to be prepared in respect of this issue but that report has never been made public. Instead, the only report that was reported was one prepared by G4S in respect of ALL stadiums and not this particular incident.

The tragedy was raised in Parliament a Ministerial Statement issued. You can read the debate in Parliament here from page 24 to 31.
I do not wish to make this a campaign issue seeing as it is that fans are more interested in the upcoming elections. But this is merely a challenge to all of us. What can we do?
Remember, it could have been any one of us or any of our friends.
This is part of the reason why fans need to come together from across the branches and work together as one body, without saying that the fan who passed on is not from our branch. As one unified body, the fans can initiate certain programmes and activities to assist our own to supplement some 'corporate social responsibility' or the other noble causes such as assisting players who have been fired from the club.
Liverpool FC fans for instance still hold memorials for the 96 fans that also sadly lost their lives at the Hillsborough disaster.Let us keep the memory of Franklin alive.
Those who know the family of our dear brother who innocently lost his life and whose last activity was trying to watch his favourite team can also come out and let us brainstorm on how we can assist. From the media reports, it can be noted that he was from Kamobon, Hamisi (Vihiga County). If Leopards went to play in Western Kenya as they did recently or as they will when they go to play Western Stima, it would be nice if we could condole the family.
My dear Leopards fans, are we up to that challenge? Any other ideas?
Posted by Ingwe Fan at 8:09 PM