How Deep Is Your Love?

Increasingly, it is becoming clear that a section of the fans are most obsessed with short term goals for the team they should be loving the most; instead of having long term ambitions.
The elections set for 13th February are some of the short term goals that fans of the team seem to have set. In most likelihood, a majority of the fans are going to be disappointed by the outcome of the elections and will have nobody to blame but themselves.
Because of the perceived disconnect between a section of the fans and the current officials of the team, this has led to situation where the clamour of elections has taken precedence with a former Chairman Alex Ole Magelo taking on the current Chairman Julius Ochiel whilst a newcomer Winston Kituyi also eyes the top seat at the club.
It is this three who, on the prodding of sponsors Mumias Sugar Company Limited, led to the formation of an ‘Electoral Board’ to oversee the elections coming up on Sunday. The Electoral Board made some astonishing decisions that seem to indicate that the end justifies the means.
Three decisions stick out from the pronouncements of the Electoral Board.
The first was that membership would be open and fans could purchase their membership cards from specific destinations. This was in line with the previous announcement by Catherine Omanyo, the supposed Acting Secretary General, who had indicated that membership would be closed a week before the elections to prepare the voters register. However, one issue that fans have chosen to ignore is that by registering people who do not care about the team and can not be classed either as fans or supporters but as members or voters, the fans are diluting their own rights. Yes.
You can support Leopards from Day 1 to Day 365 of the year, buy its merchandise, buy its match tickets, travel to see the team play even away, attend some training sessions that may be open to the public, meet at fora for fans such as Ingwe Night or Facebook Branch meeting… yes, you can do all that but on 13th February, someone who has no stake in the fortunes of the club, who has not been a fan for the last one year or two years or three years but who manages to pay or be paid for a sum of Kshs. 100 will vote for the destiny of your team! There is no waiting period for such hired-hands and rent-boys to take part in the determination of who the officials will be.
The second was that the membership fee would be the sum of Kshs. 100. which is the same fee as what members were paying in 2002, a period of almost ten years ago! 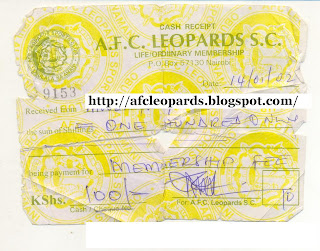 This altered the previous announcement by Omanyo that the fee would be Kshs. 500. Again, this has implications. With a fee of Kshs. 100 there are likely to be more paid up members than if the figure was Kshs. 500. The persons contesting the seats do not mind this alteration since they each feel that it will lead to more fans being registered and hopefully being in their favour. Again, this leads to more hired-hands and rent-boys than if the membership fee was higher.
Allow me to however define a few things seeing as it is that there seems to be a myriad of terms to refer to people who are fans of the team. Are they fans or are they members or are they supporters or are they just voters? Which category do you belong to?
Fans (or sometimes fanatics) are people who follow the team with a passion, people whom if you asked what team they follow, they would say at the first instance Leopards.
Members is purely a legal status. People who are paid up or registered in the register of members. They may not even attend the matches of the team but if decisions were to be made such as the change of the constitution, they would have a say.
Supporters are those people who stand by the team or who offer ‘support’ to the team. By buying merchandise, you are supporting the team. By donating monies when fund raising activities are called by the tea, you are supporting the team. By attending Ingwe night, you are supporting the team. By donating 500 footballs to the team, you are a supporter of the team.
Then voters are those hirelings who come merely to make decisions of a team they may not even support or are fans of. You may see them on Sunday having no idea how the team performed last year; having not attended a match of the team; having been paid for to come and vote. These are the ones I have a problem with.
Ingwe Fan wishes to pose a question to fans. Yes, you complained that the fee of Kshs. 500 was too high? But how deep is your love for the team? How much are you prepared to pay and in effect to support the team? Last weekend, Chelsea hosted Liverpool and some of the tickets for this match were over 50 Pounds! That is almost Kshs. 6,760 to watch the match!

We pay a paltry sum of Kshs. 50 to watch Leopards and when he figure is hiked to Kshs. 200 we are quick to complain! But in the end, how do we help our team raise funds and be able to retain the best talent if we do not dig deep in our pockets? 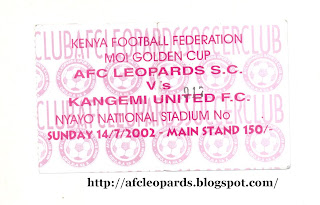 Thirdly, the Electoral Board made the curious decision that on 13th February, the fans would have a choice of two new constitutions to vote for. Some fans do not even know the current constitution of the club so technically, the fans will be told to choose to replace a constitution they barely know, unless the choice of the constitution is one between the old and the new. But if two new constitutions were to be floated, this is just a pointer at the confusion at the club that does not seem to even know the direction it should be taking. How can the fans elect officials under the old constitution then vote in a new constitution that may be abolishing some of the positions that the fans would have voted for a few minutes earlier? Will the two versions of the constitutions be available on the official website for the fans to read them at least a week to the voting or will the fans be given a choice at the venue? If the latter happens, there is likelihood that some fans may decide to take some form of legal action at the fraud would have taken place where voting machines make decisions without critically examining them.
In all likelihood, the elections set for 13th February will end up being a farce and fans will realize AFTER the event that there was never any chance of real change at the club.
The incumbent Ochiel is most likely going to win the Chairmanship after the split of votes between Magelo and Kituyi who may then protest at the ‘non fans’ who will have been ferried to the Railways Club to vote in the elections even though they are not fans of the team. That would be a hypocritical stance to be taken noting that they themselves would have most likely paid for some ‘non fans’ to vote for them.
Dr. Anthony Walela, a respected former Leopards administrator and member of the Facebook Branch had mentioned in a discussion forum on the branch page that to win, someone may need over 8,000 votes since the aborted elections that were held at a day’s notice saw 1,500 fans (and non fans) being reported to have voted. 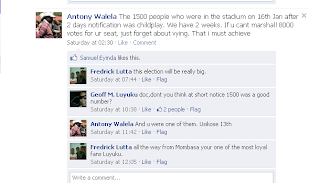 This stop gap measures of an election just two weeks before the season starts would have been averted if the fans had been patient; held discussions with the incumbent Chair and made it clear that they would not support office activities and initiatives if their views were not taken, insisted on serious membership fees being paid that is commensurate to inflation and prevailing circumstances of economy and on a waiting period of at least six months passing.
But we are not prophets. We hope that fans can surprise us on that day! And also pray for the stability of our team. This is just an opinion.
Posted by Ingwe Fan at 3:51 PM