Can I Get An Amen? 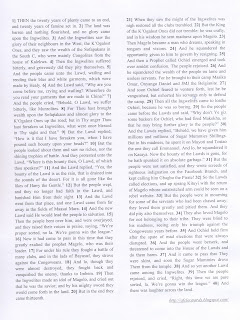 * Click on Image to enlarge
** Ingwe Fan apologizes to all those with religious sensibilities.

1] THEN the twenty years of plenty came to an end, and twenty years of famine set in. 2] The land was barren and nothing flourished, and no glory came upon the Ingwelites. 3] And the Ingwelites saw the glory of their neighbours in the West, the K’Ogalost Ones, and they saw the wealth of the Sofapakans in the south, who were mainly Congolites from the house of Kalekwa. 4] Then the Ingwelites suffered bitterly, and grievously did they pity themselves. 5] And the people came unto the Lawd, wailing and rending their blue and white garments, which were made by Legea. 6] And the Lawd said, “Why are you come before me, crying and wailing? Wherefore do you rend your garments that are made in China?” 7] And the people cried, “Behold, O Lawd, we suffer bitterly, like Munronites. 8] For Thou hast brought wealth upon the Sofapakans and almost glory to the K’Ogalost Ones up the road; but in Thy anger Thou hast forsaken us Ingwelites, what were once blessed in Thy sight and that.” 9] But the Lawd replied, “How is it that I have forsaken you, when I have poured such bounty upon your heads?” 10] But the people looked about them and saw no riches, nor the shining trophies of battle. And they protested unto the Lawd, “Where is this bounty then, O Lawd, of which thou speakest?” 11] And the Lawd replied, “Yea, the bounty of the Lawd is as the rain, that is drained into the sounds of the desert. For it is all gone like the likes of Harry the Gentle.” 12] But the people wept, and they no longer had faith I the Lawd, and banished Him from their sight. 13] And the Lawd went from that place, and three new Lawds came from far away in the West. 14] And the new Lawds said They would lead the people to salvation. 15] Then the people bent over them, and were overjoyed, and they raised their voices in praise, saying, “We’re proper sorted, no la. We’re gonna win the league.” 16] Now it had come to pass in this time that they greatly exalted the prophet Magelo, who was their leader. 17] For under his rule they fought a battle of many clubs, and in the lads of Bayusuf, they strove against the Congoweans. 18] And lo, though they were almost destroyed, they fought back and vanquished the enemy, thanks to Imbem. 19] Then the Ingwelites made an idol of Magelo, and cried out that he was the savior, and by his mighty sword they would come forth in the land. 20] But in the end they came thirteenth. 21] When they saw the might of the Ingwelites was nigh restored all the clubs trembled. 22] But the King of the K’Ogalost Ones did not tremble: he was crafty, and in his wisdom he sent madness upon Magelo. 23] Then Magelo became a man who dreams, speaking in tongues and visions. 24] And he squandered the opportunity given to him to govern by resigning. 25] And then a Prophet called Ochiel emerged and took over amidst confusion. The people rejoiced. 26] And he squandered the wealth of the people on lame and useless servants. For he brought to their camp Masika Omar, Onyango Daniel and JMJ the Belgianite. 27] And soon Ochiel feared to venture firth, lest he be vanguished, but exhorted his servants only to defend the camp. 28] Then all the Ingwelites came to loathe Ochiel, because he was so boring. 29] So the people came before the Lawds and said, “Why don’t Ye giz some backers for Ochiel, who had fired Makokha, so that he may bring further glory to the people?” 30] And the Lawds replied, “Behold, we have given him millions and millions of Sugar Mummies Shillings. But in his madness, he spent it on Muyoti and Tostao the one they call Emmanuel. And lo, he squandered it on Kasaya. Now the bounty of the Lawds is gone, for he hath spunked it on absolute garbage.” 31] But the people were not satisfied, and they wrote screeds of righteous indignation on the Facebook Branch, and kept calling him Gbagbo the Pirate! 32] So the Lawds called elections, and up sprang Kituyi with the return of Magelo whose outstretched arm could be seen on a rebel website. 33] But the people were in mourning for some of the servants who had been chased away; they loved them greatly and pitied them. And they did pity also themselves. 34] They also loved Magelo for not belonging to their tribe. They were blind to his madness, seeing only his triumph against the Congoweans years before. 35] And Ochiel held firm after the spate of mad elections that were always disrupted. 36] And the people went berserk, and threatened to come into the House of the Lawds and do them harm. 37] And it came to pass that They were skint, and soon the Sugar Mummies drove Them from the temple. 38] And so yet another Lawd came among the Ingwelites. 39] Then the people rejoiced, and cried, “Right, this time we are pure sorted, la. We’re gonna win the league.” 40] And there was laughter across the land.
Posted by Ingwe Fan at 5:23 PM