Well, well, well. The second match of the season is upon us. There seem to be fewer predictions this time. But Carol Radul gives Leopards the L treatment once again with a 2-0 loss to Rangers. Seems that soon we shall be saying: As rare as Carol Radul giving Leopards a W in her prediction column.
But we cant blame her seriously. The performance by Leopards last weekend was abysmal whilst Rangers were the top dogs downing Gor Mahia 3-0 and if that score wasn't a cricket score, it lead to Gor fans auditioning for the Kenya cricket team by bowling some stones. 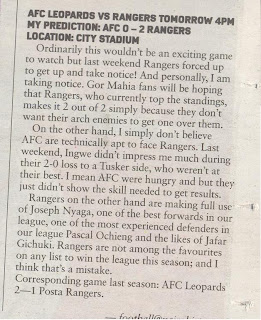 Kenyanstar goes with a nil-nil prediction.
AFC Leopards v Rangers
City Stadium, Nairobi
Sunday 6th March 2011
4.00pm (live on Supersport*)
The trouble ridden, wrangle laden, controversy loving AFC Leopards finally give their fans something to smile about. Let us pray so. Ingwe were 0-2 losers to Tusker, match where they were always second best. Their second KPL fixture would have been easy, on paper, but as Gor Mahia found out, write off Rangers at your own risk. Not because of last weekend's 3-0 result against K'Ogallo but rather due the experience in the Rangers line up. With the likes of Pascal Ochieng, Charles Okwemba, Kevin Ochieng, Joseph Nyaga and Lawrence Webo, Rangers present a clear and present danger and Ingwe, who struggled against Tusker must guard against underrating their opponents. This should be another closely contested tie.
Prediction AFC Leopards 0 Rangers 0

The Standard had recently carried out an interesting piece on Lawrence Webo, the Rangers custodian who joined Rangers from Ingwe. The article by James Waindi stated:-
Rangers’ custodian Lawrence Webo has said he was sad that his spell at Sunday’s Kenyan Premier League (KPL) opponents AFC Leopards had ended on a sour note.
The 31-year-old custodian who had stints with top Rwandese clubs Rayon Sports and Police FC, in his career before joining Leopards in 2009, left the 13-time champions in December for Rangers FC after Leopards’ technical bench decided to replace him with Barnabas Tiema.
To compound his woes there was battle in getting a release letter for him to join bitter Premier League rivals Rangers.
He, however, said he does not hold anything against the club and noted that he would just focus on winning the local title with his new employers who are featuring in the local league for the second season.
"I’m very sorry that I left," said Webo, who was instrumental in Leopards’ battle to avoid relegation last season. "Sadly, things happened in the final few months there that I regret. But everyone has his character. I can say I was pushed out of Leopards because my wish was to stay with the club."
"The club, though, gave me a lot, and the supporters were at my side from day one. But there are things that happen in one’s life," added Webo, who has been capped more than four times.
"I spent more than 12 good months at Leopards, and have many happy memories," said Webo, who began his professional career with former league side Mumias Sugar before moving to Rwanda in search of greener pastures.
"Those were very beautiful moments at a great club. I don’t think things are very different today, because it is the same fans who still support the team and who created the philosophy, the daily routine, and the club’s message."
Despite the sour end to their working relationship, Webo said he still had much to thank Leopards for.
"If I say I was eyeing revenge against Leopards I would not be a professional and I may end up making mistakes on the field. Whatever happened has happened and now I have a future with Rangers and I want to win trophies with them," said Webo.
He said despite the fact they had been written off in the league’s race by pundits, Rangers could still put up a good show in the campaign and even win it. He anticipates an action packed fixture against his immediate former employers on Sunday and believes Ingwe would suffer the same fate as Gor Mahia who lost 3-0 to the perceived under dogs on the first day of the league.
"We have an equally strong team just like Leopards and but it is vital we play with 100 per cent commitment, give our all," he said.
Posted by Ingwe Fan at 10:16 AM