Away from the field, where AFC Leopards always shines, an interesting match-up was taking place at the Milimani Commercial Courts in the High Court at Nairobi where two fans or members of the team (also called “the Applicants”) have taken legal action in respect of the persons running the team. 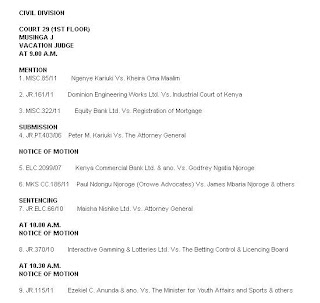 UPDATE: The parties were unable to agree and the judge granted them additional time to consult. The case shall be mentioned on 24th August 2011 and if the parties will not have a settlement, then the judge will give a date for the ruling.
Posted by Ingwe Fan at 3:33 PM