Leopards came from behind to beat Nairobi City Stars 2-1. 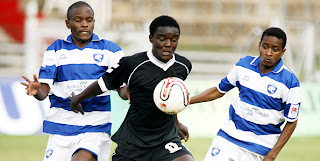 The Nation has the story:-
AFC Leopards’ revival under Dutch coach Jan Koops continued with a 2-1 win over Nairobi City Stars in a Kenyan Premier League match at the Nyayo National Stadium on Sunday.
On Wednesday, Leopards thrashed Sofapaka 3-1 at the same venue.

KPL website takes an angle of Top 8 battles with the story:-
George Odary gave City Stars a 52nd minute lead after an assist from Ugandan import Dan Serunkuma but Oscar Kadenge struck back in the 55th minute, his second goal in as many matches.
Collins Kisuya hit the winner with a 75th minute free-kick.
Leopards went four matches unbeaten, three of them victories, but the streak will be put to the test in the coming matches, beginning in Mombasa against Bandari on September 10 followed by a clash with bitter rivals Gor Mahia on September 18.
MichezoAfrika has a detailed story by Dennis Machio
AFC Leopards came from a goal down to beat City Stars 2-1 in an entertaining KPL match played at the Nyayo stadium on Sunday afternoon. The win lifts AFC Leopards to 10th position in the KPL table with 29 points from 21 matches.On Wednesday at the same venue, AFC Leopards crashed 2009 champions Sofapaka 3-1 to overturn their first leg 3-1 defeat to the same side.
After wasting dozens of chances in the first half that ended in barren, AFC Leopards found themselves on the receiving end 6 minutes after the start of the second half when George Odari lifted City Stars to premature glory in the 52 minute after receiving a lovely through ball from Ugandan Dan Serunkuma.


City Stars’ glorious moments lasted for only four minutes as on-form Oscar Kadenge notched in his second goal of the week three minutes later to draw parity for the Leopards.Kadenge was on the mark on Wednesday after scoring one of the fastest goals this season so far against Sofapaka in less than a minute from kick off.

On Sunday his shot proved too strong for City Stars keeper Fredrick Majani who fabled with the ball only to see it roll past the line much to the delight of the partisan blue stripped crowd.

Left full back Collins Kisuya drilled in the winner for AFC Leopards with a fantastic curl beyond the City Stars’ wall from a free kick in the 71st minute.

AFC Leopards assistant coach Mickey Weche speaking after the match  attributed the team’s recent form to team work and self confidence saying  “The players have started to believe in themselves and we are happy the team is coming back to good shape. It has taken us sometime but we are now seeing cohesion, confidence and positive stability in the team. It is a good result and we thank the players for their determination and the fans for their support.” He said.

Weche however called on more fans to come out and support their team in their next matches.

On the other end, the loss is not welcome news for City Stars who continue to sink deeper in relegation zone as they remain rooted at 2nd from the tail end with 15 points from 21 matches, a point above bottom placed Congo United who also lost their match against Sofapaka on Sunday in Mombasa.

The KPL League takes two weeks break to give room for FKL Cup fixtures next weekend and Harambee Stars vs. Guinea Bissau Africa Cup of Nations match on 3rd September.