Leopards avenged the 3-1 loss in the first leg to Sofapaka by winning 3-1 last night. 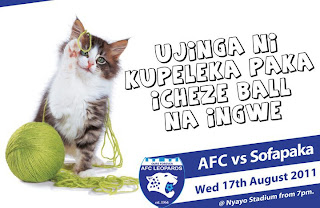 MichezoAfrika had the following story by John Munene
A revamped AFC Leopards reversed a first leg 3-1 defeat to emerge winners in the second leg match against Sofapaka .The entertaining fast paced  Kenyan Premier League match was played at Nyayo stadium on Wednesday and served as a sweet revenge after AFC had fallen by a similar margin in the first leg encounter.
AFC Leopards got off to a flying start after Oscar Kadenge lobbed past Sofapaka keeper Duncan Ochieng for an early goal after Martin Imbalambala had singled him upfront with a long ball. The goal that came 50 seconds after center referee had blown the kick-off whistle is a sure contender for the fastest KPL goal this season.
Dodo Kayombo equalized for Sofapaka ten minutes later with a powerful header from a Titus Mulama's free kick. The goal seemed to re-energize Batoto ba Mungu who showed signs of  clicking specially in the midfield. Fit again Anthony Kimani combined well with late inclusion Humphrey Mieno. Mieno was drafted into the squad after defense kingpin Edgar "Fighter" was suddenly taken ill before kickoff.
In the 18th minute, a careless Sofapaka keeper Duncan Ochieng fabled when he lazily threw the ball to Dodo Kayombo. Sensing the keeper was off his line, Mike Baraza gave AFC the lead again after he outwitted Dodo Kayombo , pounced on the loose ball and drilled it into an empty net .The halftime whistle blew with AFC leopards leading 2-1
After the break, Sofapaka slowly started dominating proceedings but it was evident they were missing lethal striker John Baraza up front as nothing much came out of their blunt attacking line-up. On form Oscar Kadenge had a great chance to extend AFC Leopards from a good Mike Baraza kick but missed the target again.
In the 69th minute, Humprey Mieno came close to equalizing but AFC custodian Patrick Matasi parried the shot for a corner. Another quick attack by Batoto ba Mungu ended up in an offside flag for Anthony Keymani.
Dutch Coach Jans Koops’ tactical prowess then came into full light as his substitute, Laurent Tumba who had come on for Emmanuel Tostao headed home the third goal with eight minutes to the end to send the blue army into wild celebrations.
Center referee Daniel Githaka was forced to stop the match briefly to ensure all fires lit by the joyful AFC Leopards crowd had been put off. The crowd quickly obliged thus allowing the match to go on.
AFC custodian Patrick Matasia blocked Francis Ouma's shot and again prevented an absent John Onami from grabbing an injury minute goal for Batoto ba Mungu.
After six minutes of added time, the match ended 3-1 in favor of the hosts as Kimanzi walked back into the dressing room with head burrowed in his hands as the league is getting tough on his boys. 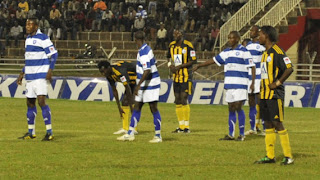 KenyanStar had this story by Timothy Olobulu
AFC leopards were on cloud nine after a well deserved 3-1 win over Sofapaka in an entertaining Kenya Premier League fixture played at the Nyayo National Stadium on Wednesday evening. As early as the 3rd minute, Oscar Kadenge had already shaken the net even before the game could take its cool with Sofapaka trying to get their feet into the game.
After good play from midfield involving Bernard Mang’oli and Martin Imbalambala, Kadenge pounced on the ball from the right wing, raced down Thomas Wanyama before unleashing the shot from the wing which Sofapaka keeper Duncan Ochieng had mistaked for a cross.
Sofapaka seemed to have finally found their footing when Dodo Kayombo headed in at the 9th minute from the far post after Titus Mulama’s free kick. However, Sofapaka’s leaking defense which had an unusual pairing of Dodo Kayombo and Mudde Musa gave up another goal just eight minutes after scoring.
Lethal striker Mike Barasa pounced on an intended pass to Dodo Kayombo from Duncan Ochieng before lobbing it past Ochieng as he raced to amend the mess. With the goal, AFC looked to be the more commanding side of the game with Salim Kinje, Bernard Mang’oli and Charles Okwemba knitting up a powerful combination from midfield.
Just a minute later, the now porous Sofapaka defense almost conceded another goal in the same manner but this time round Ochieng was more swift, cutting out the ball from Emmanuel Tostao’s feet.
Leopard’s defensive pairing of Martin Imbalambala and Jonas Naimana created a “twin tower”, cutting out all Sofapaka’s attacks from the air and on the ground. With Jonas and Imbalambala reading Sofapaka’s mode of deep cross attacks, Batoto Ba Munu saw all their efforts being thwarted with Keeper Patrick Matasi also keen with his jumps.
Leopards manage to control the game and held on to the lead until half time.
Come the second half, SDofapaka tried to inject some pace into the game with the aim of netting an equalizer and hopefully find the winner. 25 minutes from the restart, Humphrey Mieno making a comeback to the team with his Club Africainne move shelved for December, had a chance denied by Matasi when he lutched onto a cross from the right.
Coach Francis Kimanzi decided to bring in Patrick Kagogo and Francis Ouma in a bid to add strength to the attack but this did not work out. AFC continued with their domination of the match and only luck separated them from stretching the lead.
Ingwe’s icing on the cake was set up by former Sofapaka striker Laurent Tumba who headed in with 78 minutes on the clock from a Charles Okwemba corner. Tumba did not celebrate much the goal, being scored against his former bosses but only raised his arms up in an apparent “thank you” to the one above.
Leopards managed to hold on to the lead until the final whistle and it was all song and dance as players, fans and team officials celebrated the all important win. The win now sees Leopards revenge on the 3-1 thrashing they were handed by Sofapaka in the first leg.
Leopards now have 26 points out of 20 matches and now move to tenth position while Sofapaka remain un moved at 6th with 30 points. AFC will next meet City Stars in Nairobi while Sofapaka will be preparing for the long trip to Mombasa for the Congo date. 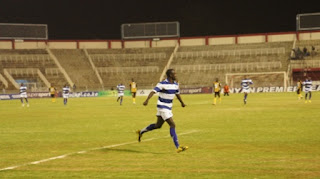