The Leopards will be playing away... well... they will actually be playing home away from home, when they take on Karuturi Sports on Sunday 20th March. Leopards have moved the match from the usual home ground of Nairobi to Mumias in keeping in line with the shirt sponsor, Mumias Sugar, request that they play some home matches at the Mumias Sports Complex, which has reputedly, one of the smoothest surfaces in the country. Leopards also trained at the Mumias Complex during the pre-season so they really should be at home during this match.

Predictions.
First, Carol Radul goes for a Leopards win. Some Facebok Branch fans of Leopards immediately cried that this was a bad omen, as Carol has always been known to get results wrong, especially when it comes to her beloved Arsenal of England. 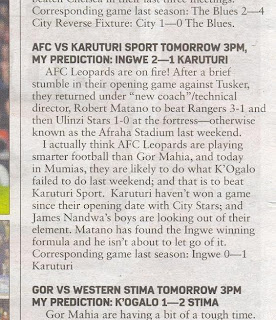 So 2-1 it is in favour of the Leopards.
Supersport also has a prediction by Collins Okinyo and what do you know? It also goes for a 2-1 Leopards win.
AFC Leopards Vs Karuturi (Mumias Complex)
The match has been switched to the Mumias Sugar complex in Western Kenya because of Leopards’ sponsors Mumias Sugar. AFC Leopards are placed in the fifth place with six points in the log table while their challengers Karuturi Sports are in tenth with four points from three games.
Leopards seem to have found their form with the change of guard that has seen Robert Matano take over from Belgian Robert Bollen. Karuturi emerged victorious over Leopards in he same venue last season so they will go into the match expecting another surprise victory over a resurgent Leopards team.
Our Prediction:2-1

The Saturday Nation has a short preview by Odindo Ayieko.

At the Mumias Complex, AFC Leopards, fresh from silencing Ulinzi Stars last weekend host Karuturi Sports hoping to continue their winning form.
Coach Matano is however worried about the fitness of midfield kingpin Nick Muoyo who looked troubled by his knee against Ulinzi while last weekend’s scorer Evans Wandera is serving a one match suspension.


But Hugo Nangu and Dimonde Selenge are fit to start while Martin Imbalabala may be recalled to help the defence.
Nick Muoyo?
MichezoAfrika has a preview of the match and also informs of the return of Itubu Imbem of Leopards. The story is penned by Dennis Machio


AFC Leopards team left Nairobi early Friday morning for Mumias where they will be playing their next home match against Karututri sports on Sunday afternoon in their fourth KPL fixture. This will be the first match AFC Leopards is playing at the sponsor’s backyard this season and a win for the team that has so far found a winning rhythm is all the western fans are waiting for.Among the traveling group is Congolese International Itubu Imbem who will be making his first appearance this season following a pre season injury he sustained while on a western tour with his club AFC Leopards early this year.Imbem has been out of action for his club for close to two months now following a jaw injury but he is now energetic and roaring for his first appearance this season. “Am ready for the match. Sitting out on the terraces is not fun at all and am happy to be back in the squad finally. It is a good thing my team has started the season on a high note winning two matches and I will work even harder to earn us more goals and points hopefully starting this weekend.” He said.AFC Leopards’ lead striker Itubu Imbem and Demonde Selenga - both foreign players- have been tipped to be having one of the best striking combinations in KPL and a good run in their partnership this weekend could overturn last season’s result at the same Mumias Sports Complex venue when AFC went down to Karuturi sports.AFC Leopards Team manager Bernard Onyango has also expressed elation of his team playing at his former home ground in his capacity as team manager.Onyango famously known as Imbogo turned out for Mumias Sugar FC before its disbandment and has asked his boys AFC Leopards to reward him with victory in his return back to his grounds.“This was my home for many years. I know each and every corner of the stadium and am confident we shall impress our fans that have been left hungry for ages after our withdrawal from the league.” He said.Other members of the Mumias Sugar team at that time were Nick Yakhama (Currently head coach of Chemelil Sugar and former AFC Leopards coach), Patrick Mugata who is the stadium manager at the sports complex amongst others.

The Standard has a short preview too.

Elsewhere, AFC Leopards face Karuturi Sports at Mumias Complex without the services of four key players. Striker Brian Masiolo has been ruled out of the contest with a knee injury same as defender Martin Imbalambala, while diminutive midfielder Salim Kinje is out with a torn muscle and Augustine Etemesi is still nursing a cracked right toe.