In every election, there emerge the victors and the vanquished.
Sundays elections, boycotted by Julius Ochiel, saw the bouncing back of Alex Ole Magelo as Chairman of the Club.
Ochiel, as expected, cried foul.
Magelo as expected, duly presented the returns of the elections to the Registrar of Societies, or the Registrar General, as the case may be) who duly recognized the team as duly elected. 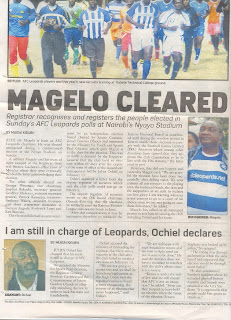 The clearance of Magelo by the Registrar was reported in most media including Supersport.
Magelo then took over the team.
The Standard reported this.

By Oscar Pilipili
Wrangles that have been part of AFC Leopards appear to be over after the Interim Management Board handed over the KPL team to the office led by chairman Alex Ole Magelo.
The Board that was chaired by Commissioner for Sports Gordon Oluoch handed over the team at an official ceremony at Kabete Technical, the team’s training venue
The Registrar of Societies mandated ole Magelo to run the Leopards office after he was declared winner of elections held at Nyayo National Stadium last Sunday but boycotted by rival Julius Ochiel.
The chairman vowed to use his management experience to ensure Leopards regain their lost glory and unite all stakeholders.
He said: "I’m not at Leopards by chance. I first joined the team as a committee member before rising to the rank of chairman."
Magelo said his target was to win the league and he immediately announced bonuses for performing players.
To motivate the players, Magelo said a league win will attract award of Sh3,000 per player, draw Sh1,500 and an additional Sh3,000 for scorer per goal, all these out of his pocket.
He urged players to pledge allegiance to the team rather than individuals and as well as maintain discipline if they hope to prosper in the premier league.
"History has proven beyond doubt that my character is for victory, and under my guidance you will win, win, win," he emphasised.
Magelo is credited with helping Leopards, and by using his own resources, to move out of the lower tier Nationwide league where it was languishing two years ago.
The chairman urged fans to rally behind the team and work in unity with their counterparts from Gor Mahia side to promote the giant community clubs.
He encouraged fans to behave responsibly and warned that Leopards would take drastic action against any unruly fan during their matches.
"We shall not tolerate fans that involve themselves in hooliganism against either players, officials or opposing fans and we have the capacity to deal with them," he warned.
Head of technical bench Robert Matano praised officials for not interfering with the playing unit during the politicking period.
Dan Shikanda, a member of the Interim Board, urged ole Magelo’s office to concentrate on administrative matters and let the technical bench handle players.
The KFF came out urging Ochiel to support the new Chairman.
Outgoing AFC Leopards chairman Julius Ochiel has been urged to join hands with the newly elected team led by Alex Ole Magelo who were elected in Saturday polls at Nyayo Stadium last weekend."Ochiel has done well in the time he was in office-helping the club avoid relegation as well as finalising the sponsorship deal with Mumias Sugar. He should give the new team a chance to improve on his gains," said Kenya Football Federation (KFF) secretary general Lodvick Aduda. Magelo has already extended an olive branch to his predecessor for the sake of the clubs unity and football administrators believe it is in the interest of everyone that the officials work together for the sake of the club. "You have seen how a divided club easily falls. Ochiel should heed to the call and work together with the new chairman in a bid to take Leopards to the next level," opined Nairobi KFF branch chairman Simon Mugo. "Going to court is not the best option because even FIFA statues don't allow this. If indeed bonafide club members elected Magelo, Ochiel should accept their verdict because these are the same members who put him in office,"Aduda explained.
It is not clear what Ochiel's next move is however. There were reports that there was a case filed in court and which was scheduled to be heard on 16th March. If the dispute on the leadership goes on, this will lend credence to the opinion of Charles Nyende in the Nation. 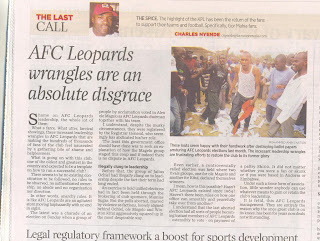 In he meantime, one of the key victors of the elections on Sunday was the team itself as it went on to Register a morale boosting victory over Rangers.

Hopefully, the team's interest will prevail and it will continue to be the victors instead of some personal interests who may be fighting over the leadership.
Posted by Ingwe Fan at 10:46 AM