The circus of Leopards elections has been covered on this blog so many times that it is beginning to sound like a broken record.
But tomorrow is Election Day.
That would be a simple thing to do surely. Until we read on Thursday in the press that there elections may not take place. Ochiel citing a letter dated 1st March 2011 received from the Assistant Registrar of Societies, Mr. Joseph Onyango, rubbished the decision by the Interim Board to call elections. 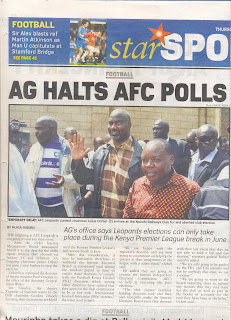 The same news was reported in the Standard:

Charles Nyende of the Nation also reported the story:
The forthcoming AFC Leopards election that were to be conducted by the government-constituted club’s interim management board on Sunday have been put on hold by the office of the Registrar General.
The Registrar General has instead directed that election be held in June after a new Fifa-compliant constitution is drafted and approved by the club at a Special General Meeting.
In a letter dated March 1 to Sports Commissioner Gordon Oluoch, Deputy Registrar of Societies Joseph Onyango advised that the interim board be withheld until June when fresh elections can be held. Oluoch who chairs the board said yesterday he had not received such communication and “we will regard it as a rumour”.
The Leopards interim board last week announced election will be conducted on Sunday using the same registry that was utilised during the violence filled aborted polls of February 13. Onyango acknowledged receiving a letter from the board giving notice of the Sunday election but said new information had been brought to his office necessitating a change in the Leopard’s situation.
Onyango quoted Fifa Rules, Articles 17 and 18 that prohibit third parties from making any decisions on behalf of or for members of AFC Leopards.
When constituting the interim board on February 23, Sports Minister Paul Otuoma said the failed elections of February 13 had left an untenable vacuum in the club leadership.
But the Leopards office under the chairmanship of Julius Ochiel (pictured, left) refuted the claim saying the law allowed them to stay in office pending successful-held elections.


Football Kenya Limited endorsed the Ochiel office last month and mandated them to review the club’s constitution pending new elections.
If you had been keeping the score using this article on this blog, that would have sounded as 4-4.
Moments later, Gordon Olouch was quoted as saying that the Assistant Registrar's decision had been quashed by the Registrar himself.
We shall post those letters once we get copies of the same.
The Standard even questioned the seeming confusion at the Registrar's office.
The recent happenings at AFC Leopards is a matter of great concern. The club, who lost their opening match of the KPL season at the weekend, is threatened on every side. The leadership wrangles, which engulfed the club the better part of last year, seem not to be going away. The matter was made worse by two aborted elections which were disrupted by hooligans claiming to be members. It appeared that the move by the Sports Minister to form a board to run the club would end the wrangles once and for all, but this may not be the case following a new directive from the Registrar of Societies. The whole matter now brings to question the role of the Registrar of Societies. It is disheartening to note that the same Registrar of societies had written to the Ministry of Sports to form an interim committee to manage the club, only to turn around and disown the same. While the issues raised by the registrar in disowning his earlier directive makes sense, we wonder whether he had not taken those issues into consideration. As it is, the Minister of Sports Paul Otuoma has been left greatly embarrassed because the committee he put in place is no longer recognised.
Questions about the conduct of the Registrar of Societies are bound to be raised over the matter. This office cannot escape blame for the confusion at Leopards’ management, as they seem to side with one side of the officials. The Registrar of Societies must be above reproach in these matters and consult widely before making certain decisions.
Then the www.afcleopards.co.ke website carried a story that the Court had granted an injunction against the elections. 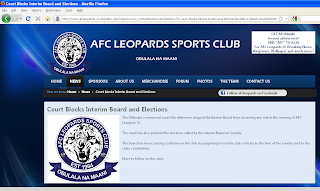 But the www.afcleopards.net website denied that the court had granted the orders. 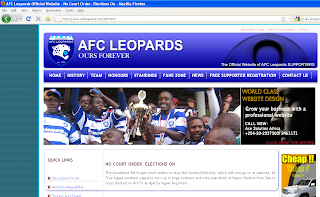 Oh boy! What a charade! What a confusion!

In the midst of all this confusion, Winston Kituyi withdrew from the race for Chairman and had some scathing words for some of the officials at the Societies Registry.


The Star reported:
WINSTON Kituyi has withdrawn his candidature for the chairman’s post in AFC Leopards elections whose due date now is a subject of speculation after the deputy registrar of societies shelved the exercise.
The club elections earlier scheduled for this Sunday have been postponed to June. Kituyi in a statement cited lack of impartiality at the registrar’s office, which he alluded favoured Julius Ochiel, another candidate for the top seat.
“Weak legislative frameworks in the management of football clubs has left Leopards at the whims of cartels and corrupt elements in government, thus making it impossible for an environment that is conducive to free and fair elections,” he charged.
Kituyi also took issue with the deputy registrar Joseph Onyango for challenging the legality of the Interim Elections Board, which was constituted by Sports Minister Paul Otuoma specifically to organise the Leopards’ elections.
Kituyi went on to lambast Onyango for nullifying the results of the ‘Mlolongo’ elections held at Nyayo Stadium on January 6 which saw both Alex Ole Magelo and Kituyi claim victory after Ochiel snubbed the polls.
He said the deputy registrar made a turn around and nullified the elections, querying the validity of the notice which he had earlier accepted. “Communications between two government offices is copied suspiciously to Ochiel yet statements are never made public. My complaints over the nullification of the first election in January have never been responded to by the registar’s office,” charged Kituyi.
He said the government failed to provide adequate security to ensure free and fair elections during the second exercise on February 13.The departure of Kituyi from the scene will leave it for Ochiel and former chairman Magelo to battle it out if and when the elections are called. Kituyi suggested that the person who should run the club must have the legitimacy of a free and fair process

Whatever happens, and in the face of the impending battle for the control of the Leopards, we hope the team on the pitch will not be distracted but will play to win and not use the Election YES, Election NO confusion as an excuse for any loss on the pitch.
Posted by Ingwe Fan at 10:53 AM