The Kenya Premier League fixtures are out and Leopards fans will be trooping back to the stadium for football action on 27th February when we face Tusker FC (formerly Kenya Breweries FC) in our season opener. 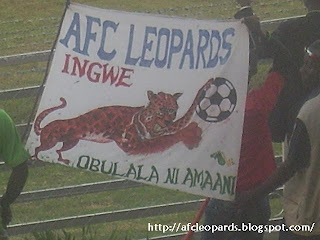 The rest of the fixtures in the first leg are:-

The saying that Leopards is the team that is always playing at home wherever it goes will ring though during this season as in the first leg, twelve matches of Leopards  are scheduled to be staged in Nairobi, whilst one of he matches is 'away' at Bukhungu. Leopards will also visit Mombasa and Nakuru in the first leg. In fact, Leopards plays Sofapaka, Posta Rangers and Mat Utd at Nyayo as away matches whereas Nyayo is the home base of Leopards.

Surprisingly, the fixtures show that Leopards will play Nairobi City Stars at Hope Centre evoking memories of the last time Leopards played at the pitch when the match was abandoned and later awarded to City Stars in controversial circumstances. Read the ruling here. KPL had last year promised that fixtures involving Leopards and Gor shall not be staged at Hope Centre.

Speaking of Gor, the teams clash in June at the Moi Sports Centre Kasarani that is currently undergoing renovations. It is hoped that by then the pitch shall be available for use.

For armchair fans, six matches shall be televised live on Supersport Channel 209. These are the games against Tusker, Champions Ulinzi, Thika Utd, Sofapaka, Gor and Bandari.

Leopards first took part in the national League Championship in 1965 when they finished fifth in the League with the champions being Feisal of Mombasa.

In 1966, Leopards were crowned champions in their second attempt beating teams such as Nakuru All Stars, Harambee Maseno, Luo Union and Feisal of Mombasa that made up the top five.

In 1967, Leopards retained he championship ahead of Kisumu All Stars, Luo Sports Club, Harambee Maseno and Feisal who finished in that order.

At the end of this season, Luo Union and Luo Sports Club merged to form Gor Mahia FC.

In 1968, the strong merged teams proved too strong for Leopards as they won the championship for their first time.

But in 1969, the national league did not take place. Instead Nakuru All Stars won the FA Cup of Kenya.

Leopards retained the League title  in 1970 and were the first unbeaten champions in the history of the Premier League in Kenya.

In 1971, controversy led to the scrapping of the League which was then won by Kenya Breweries in 1972. The 1972 league was decided in a Cup final manner with the Brewers beating Leopards 1-0 in the final though Leopards was missing most of its players who were with the national team.

The 1973 was decided on a Super League basis of three teams in which Leopards won the League ahead of Abeingo and Gor Mahia. There were three zones and the top team in each zone qualified for the Super League.

In 1974, Luo Union were champions in a league that Leopards boycotted after noting that the league seemed to favour Kenya Breweries and had in fact been mooted by Kenneth Matiba, who had ties with Breweries.

When Leopards rejoined the league in 1975, they found themselves a bit rusty in a league won by Luo Union before Gor won it in 1976. Tusker won the next two Leagues of 1977 and 1978. In 1978 Leopards finished third behind Kenya Breweries and Gor Mahia. Gor took it in 1979.

In 1980, Leopards won back the title with five matches to spare.

Leopards retained the title in 1981 and made history by becoming the first team to win the league three times in a row when they won it again in 1982. In both 1981 and 1982, Gor finished second and Tusker finished third.

In 1983, Leopards finished third behind Gor and Scarlet. In a lean period that followed, Gor showed that what Leopards could do they could also imitate when they won the league three times in a row by winning it in 1984 and 1985. Leopards finished second both times.

Leopards stopped Gor from winning the League four times in a row when they snatched it back in 1986. But in a shocking year that followed, Gor won the treble in 1987 sweeping the League, Moi Golden Cup and Mandela Cup.

Gor surrendered the League to Leopards in 1988 and 1989 with Leopards finishing the 1988 season unbeaten once again.

1990 was the year of Gor who also retained it in 1991 before Leopards won the title back in 1992. Gor took it back in 1993 when leopards finished third behind Tusker.

Tusker then broke the exchanges between Gor and Leopards when they won the 1994 title as Leopards finished fifth behind Gor, Utalli and Rivatex. Gor also won the 1995 title before Tusker won it again in 1996 when Leopards finished second in the League. For interest sake Gor was seventh this year!

In 1997, Utalii won the League ahead of Gor Mahia and Mumias Sugar as Leopards finished fourth.

1998 was the last year Leopards won the league with Mumias Sugar second and Gor third.

In 1999, Mimias Sugar won the League in a scandalous manner when they beat Kisumu All Stars 10-0 in their last match which they needed to win by seven clear goals. Tusker was awarded this championship as they had finished on the same points but Mumias Sugar had tried to get ahead on goal difference. Leopards finished fourth and Gor seventh.

Tusker also won the 2000 League that featured 24 teams split in two zones of twelve teams each. For the first time, Leopards and Gor didnt play each other in the League as Gor was in the Sportsman Zone whilst Leopards was in the Tusker Zone. Leopards finished fifth in their zone whilst Gor finished fourth but only the top two teams went into the play offs that were won by Tusker.

The 2002 League was also in split zones with Gor finishing last in their zone to be relegated whilst Leopards finished sixth in their group to miss out on the play offs. Gor was however not relegated after the football authorities decided to sneak Gor back into the League. Oserian retained the title.

The 2003 was also in two zones though this time Leopards and Gor were in the same zone. Gor finished sixth, Leopards finished seventh in their zone and the title was won by current champions Ulinzi Stars.

In 2004, Ulinzi won the League that was marred with a lot of confusion that involved the then Chairman of Leopards writing to the KFF and stating that Leopards had withdrawn from the League! 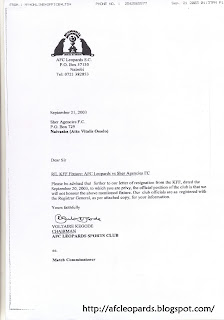 2005 saw another relegation of Gor Mahia who finished amongst the bottom three teams (ninth) in the group that also featured Leopards who finished sixth in the twelve team group. Relegated Gor was saved the axe of relegation once again when some teams were disbanded and the football authorities decided to expand the league to twenty two teams. The League was won by Ulinzi on penalties after they beat Tusker in the playoffs final.

In 2006, Leopards were relegated when confusion reigned in the team as they finished eighteenth in the league that was won by Sony Sugar. Gor were in position sixteen and the football authorities decided to axe Leopards and Shabana in controversial circumstances that will be the feature of one of the articles on this blog at a later time.

Leopards spent much of the 2007 season boycotting the Nationwide League League exploring ways in which they could be admitted back to the League by means of arbitration in a joint action with Shabana. Tusker won the 2007 League.

In the end, nothing came to fruition and with tails between the legs, the Leopard swallowed pride and played in the 2008 Nationwide League that was played in two zones. Sofapaka won one zone whilst Leopards won the other zone to bounce back to the League. On the Premier League front, Mathare United finally won the League for the first time.

In 2009 and 2010, Leopards finished thirteenth and twelfth in the League under the regimes of Magelo and Ochiel but on equal points of 34. 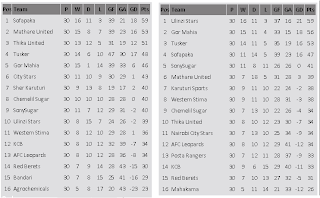 The title was won by Sofapaka and Ulinzi respectively.

Will the Leopard roar again? Will the Leopard find its claws in 2011? With the fixture list out already, only time will tell. Both Leopards and Gor are tied on twelve League titles and it will be interesting to see who reached thirteen first! Ingwe Fan wishes Leopards the very best in its quest to win the League title back for the first time since 1998. It has been long overdue! After all, the last time Leopards won the League, the team between them and third placed Gor Mahia was Mumias Sugar FC! And this time, Mumias Sugar is on the side of Leopards!
Posted by Ingwe Fan at 10:33 PM