No. Not the place. Winston Kitui, candidate for the post of Chair at AFC Leopards has released hos ten point plan. 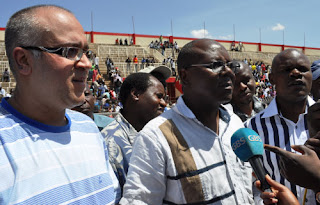 We had already seen the plan by Alex ole Magelo and Julius Ochiel and are happy to note that all the three top candidates for the post off Chairman have given us food for thought on their points.
It is titled a Promise of Change and is analyzed below:- 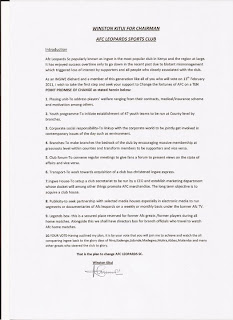 Introduction
AFC Leopards SC popularly known as Ingwe is the most popular club in Kenya and the region at large. It has enjoyed success overtime (sic) only to go down in the recent past due to blatant mismanagement which triggered loss of interest by supporters and all people who closely associated with the club.
Statement that can be disputed. The decline of Leopards is linked to a myriad of reasons especially on the pitch after the controversial decision to stop players who were playing for Leopards and other community teams from playing for parastatal teams. There was a time when Leopards players were stars in the KECOSO games until the early 1990s when there were orders that the players move to teams such as Kisumu Posta.
Admittedly there has been terrible management and decision making; flouting of the constitution; disinterest by fans after the wave of the English Premier League marketing frenzy but real fans and real supporters of this team have NEVER left.
As an INGWE diehard and a member of this generation like all of you who will vote on 13th February 2011, I wish to take the first step and seek your support to Change the fortunes of AFC on a TEN POINT PROMISE OF CHANGE as stated herein below:
Reading though, it is actually a NINE point plan as Number Ten is a plea to vote.
1.       Playing Unit – To address players’ welfare ranging from their contracts, medical/insurance scheme and motivation among others.
I wish the gentleman had gone a bit far in this. It is too much of a general statement. If he is talking about reviewing of current contracts (upwards) then he has to say where he is going to get the funding which under this whole NINE point plan is nowhere. If the intention is to improve the incentives to the players (motivation) or to increase the benefits (insurance) then it is a good goal, an obvious goal even!
Would have liked to read more about plans to professionalize the team but this is mere posturing.
2.       Youth programme – To initiate establishment of 47 youth teams to be run at county level by branches
More posturing. The team should fist sustain itself and the playing unit before it starts setting up forty seven youth teams. Where will the monies to run the youth teams come from. Leopards is still a team (individuals playing together) and not a club (an established institution with its own training ground, facilities such as a gym, proper dieting regime, stadium) and yet we want to run another 47 teams. A ridiculous proposal.
3.       Corporate social responsibility – To linkup with the corporate world to be jointly get involved in contemporary issues of the day such as environment.
In terms of priorities, this is the easily achievable but which also should rank amongst the lowest in our radar. The club should exist for purposes of winning trophies and not a mere ‘corporate’ citizen seeing as it is that it is a society. Whilst it is important for the club to have a charitable face on it, and many organizations have such ventures, there is even no need not get corporate involvement. ‘AFC In the Community’ has already been tried by the Facebook Branch and if Kitui had suggested partnering with the fans it would have been a good point.
4.       Branches – To make branches the bedrock of the club by encouraging massive membership at grassroots level within counties and transform members to be supporters and vice versa.
I think the whole issue of branches is misused here. Will branches only be geographical (that is at counties level?). What about online branches like Facebook Branch and the others that may be special interest groupings of the supporters?
Needed to clarify a lot more. Will members of the branch be members of the club automatically? What are his thoughts on this? This isn’t clear at all.
5.       Club forum –To convene regular meetings to give fans a forum to present views on the state of affairs and vice versa
Good idea. Fan forums should be encouraged even if they involve fans coming together without the behest of the Executive Office.
6.       Transport: To work towards acquisition of a club bus christened Ingwe Express.
Good idea. But unlike Ochiel who says he will have it by end of 2011, Kitui doesn’t say when. Of course it doesn’t mean because someone has said it they are going to achieve it. Has any background been done for instance to find out how much a good bus costs? How is this going to be bought? Not clear at all. 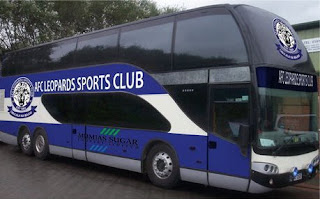 7.       Ingwe House-To set up a club secretariat to be run by a CEO and establish marketing department whose docket will among other things promote AFC merchandise. The long term objective is to acquire a club house.
Long term objectives still need date of achieving. The club house isn’t the only thing that the club needs. See comment at 2 above.
As for the secretariat, other than naming it Ingwe House, this isn’t anything new. All candidates have been talking about a secretariat by which they think it is just a grouping of persons who are assembled without any Skills Gap Analysis (marketing, accounting and so on). The secretariat isn’t just there to sell merchandise. Unless you are selling huge volumes of things such as replica shirts, the emphasis on merchandising as a money making scheme is bound to fail.
8.       Publicity – to seek partnership with selected media houses especially in electronic media to run segments or documentaries of AFC Leopards on a weekly or monthly basis under the banner AFC TV.
Good idea. Supersport currently airs some South African clubs magazine programmes each week like Siwelele for Bloemfontein Celtics, Up The Bucs for Orlando Pirates and others. But to generate interest, the team has to be performing well. If you get the mix right, you can start thinking about this.
9.       Legends box – this is a secured place reserved for former AFC greats/former players during al home matches. Alongside this we shall have directors box for branch officials who travel to watch AFC home matches.
Unique idea not seen in other manifestoes. Can be achieved and will be a way of recognizing players who leave the club for the excellent service they have rendered go the team. Players can be given some sort of identification so that their hangers-on do not take advantage. May require a serious dig into the history of the club. Do we know all the living ex-players? Do we allow active players who have moved to other clubs including our rivals? Do we put a cap and say for instance, if you have played for at least 3 years? Just generating debate on this. But it is a good idea.
10.     YOUR VOTE – Having outlined my plan, it is by your vote that you will join me to achieve and watch the all conquering Ingwe back to the glory days of Niva, Kadenge, Lidonde, Madegwa, Mulira (sic), Abbas, Mulamba and many other greats who steered the club to glory.
The whole manifesto is shallow and doesn’t break down the needs of the team presently and in the future.
That is the plan to change AFC LEOPARDS SC
If you are looking for a plan that will change leopards, this isn’t the plan. There are no radical changes that are indicated.
Posted by Ingwe Fan at 9:37 PM