Julius Ochiel released his ‘blueprint’ in the Weekly Citizen edition of February 7-13, 2011 at page 9. Ingwe Fan has an analysis of the contents. We have already analysed the Magelo blue print. We are yet to see the Winstone Kituyi blueprint with a few days left to the elections. Ingwe Fan is still undecided on whom to vote for in the elections. 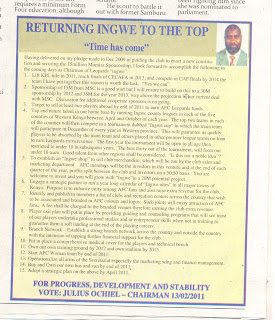 RETURNING INGWE TO THE TOP
Time Has Come
Having delivered on my pledge made in Dec 2009 in guiding the club to enact a new constitution and securing the 15 million Mumias Sponsorship, I look forward to accomplish the following in the coming days as Chairman of Leopards “Ingwe”.
Whilst the incumbent is congratulated for having led negotiations that led to the sponsorship deal with Mumias Sugar, knowing that a weak financial base has been the thorn in Leopards flesh for the last ten years or so, there are still queries that persist about the deal with Mumias. What sort of sponsor are they? Are they shirt sponsors or are they more than that. Mumias has been wielding the big stick at Leopards as if they are not getting something in return (advertising space on our chests) to the extent that they even issue cheques directly to players according to the Chair. Don’t they trust our office to account for this or what is the reason for this state of affairs? Recently, the controlling Mumias Sugar even called a meeting where the modalities under which the election is being held were issued. Hopefully, the situation of MSC will be clarified so that it is clear that we are equal partners! Unfortunately, some fans have even suggested that Mumias should be controlling even our gate collections. Surely this will be elevating Mumias Sugar to a big brother status! Or even worse. A sugar mummy.

On the constitution, the enactment of a constitution was never really a priority. Instead, amendments to sections of the constitution was. We have to wait and pass judgment on this thorny issue of the constitution after we see how whoever wins elections applies it.
1.             Lift KPL title in 2011, reach finals of CECAFA in 2013, and compete in CAF finals by 2014. The team I have put together this season is worth the task. “Yes We Can”
Every team, and particularly, AFC Leopards exists for the purpose of winning trophies. So lifting the KPL title should be a natural goal. What matters most is the strategy that he will employ to achieve that goal. There also seems to be no 2012 goal in this pledge or even the retention of the League title in 2012 and 2013.
2.             Sponsorship of 15M from MSC is a good start but I will ensure to build on this to a 30M sponsorship by 2012 and 35M for the year 2013, way above the projection in our current deal with MSC. Discussion for additional corporate sponsors is ongoing. 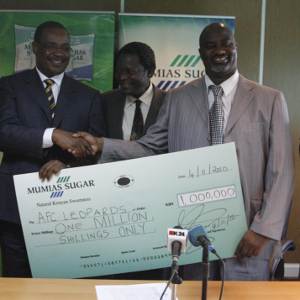 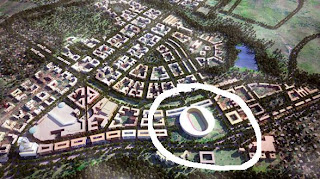 Here is a wild suggestion that I would have liked to hear: Currently negotiating with Jamhuri Park to use the arena and sign a long term lease that will involve the team training at the pitch and using the pitch as its home ground after it has been renovated. Plan to call its INGO STADIUM (sorry about that!) and it will also host some Ingwe Shops to sell merchandise. The ASK has agreed to also lease some of its buildings for purposes of refreshments for fans.
I said wild idea! But at least an idea that can be worked on instead of giving a four year deadline to owning a stadium when the term in office would have expired in 2014, if the term is ging to be three years.
12.         Start AFC Woman (sic) team by end of 2011.
So that I don’t offend Maureen, I would say great idea! But perhaps not a priority. You first take great care of the men’s team and if there is surplus, we can have a women’s team. But a good idea nonetheless and hopefully one that can one day see the light of day.
13.         Operationalize all arms of the secretariat especially the marketing wing and finance management.
Coming from an incumbent, this is very ridiculous, Ochiel has been in office for over one year. The club doesn’t have its own offices yet so the secretariat is ‘housed’ in a come we stay relationship with another organization. Firstly, we need our own office, the least the Mumias Sugar money can do is get an office. Secondly, positions such as these for the secretariat should be advertised so that the Executive Committee considers the applications and gets the best quality. But are you likely to hear that one? Never.
14.         Buy and Own our own bus and van by end of 2011.
Achievable. But what will be the strategic plan on this? Gate collections? Fund raising? We wait to see. With a definite time line, this is one of those election pledges that can be held to the candidate.
15.         Adopt a strategic plan on the above by April 2011.
Noted.
For progress, development and stability.
Not sure about the stability tag. Ochiel has come across as a forceful Chairman and has disagreed with his Secretary General Asembo. He is more visible that the Secretariat. However, give it to the man. There are some developments people! We have Mumias Sugar on board and the recruitment done this year... actually, let us wait on that until the League kicks off so we can know if he was a hit or a miss!
Posted by Ingwe Fan at 7:45 PM