William Oduke, the Honorary Secretary General of Leopards at its most successful spell in the 1980s has passed on.

An obituary posted in the Daily Nation edition of 27th January 2011 indicated that Oduke went to be with other departed Leopards legends on 23rd January 2011.

Oduke was first elected as the Assistant Secretary of Leopards on 24th February 1980 when he was serving under the Chairmanship of Dr. Walter Masiga. The team elected in 1984, and shown above with Oduke 6th from left, went on to lead AFC Leopards to the 1985 East and Central Africa Club Cup final against arch rivals Gor Mahia in Sudan which Leopards lost 2-0 to surrender the regional kingship. However, to atone for this loss, Leopards went on to reach the 1985 Africa Cup Winners Cup semi finals which they lost to Leventis of Nigeria after having beaten Asante Kotoko of Ghana in the quarter finals in one of the biggest upsets Leopards caused in their continental match ups in Africa. 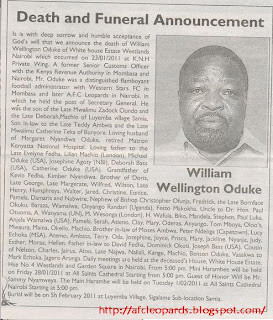 Thank you for your service to the Leopards.

In other news, Leopards has some new faces in its line ups following the announcement of the teams signings. In the notice posted on the Kenya Premier League website, Leopards have retained some of the players from last season and added new faces who hopefully are now beginning their journey into Leopards legend.

Here is the story in full:-


AFC Leopards may be having serious leadership wars at the very top but curiously they are the only Kenyan Premier League club looking all set for the new season as far as the completion of signing contracted players is concerned.

The KPL secretariat confirmed on Wednesday afternoon that only Leopards had brought in the player roster for 2011 with duly agreed upon contracts.

“But we rejected some contracts because they were lacking accompanying documents,” said a KPL official.

“The contracts of 20 Leopards players appear in order and hopefully they will put the others right because they have ample time before the transfer closing date next Monday [January 31].
“This demonstrates a situation many other teams may find themselves in if they are intending to bring their documents here in the last hour. I advise them to bring the in quickly,” said the official.

Leopards appear to have spared nothing in getting their act of picking their team together. They have spent between Sh40,000 to Sh150,000 per player to lure him from a club or convince him to extend his contract at Leopards.

For example, Leopards spent Sh150,000 each on Congolese strikers Dimonde Selenga Mangili and Itubu Imbem to have them agree on a farther stay at Leopards. The club has also spent Sh130,000 and Sh100,000 to influence the move of Evans Wandera from Sofapaka and Brian Masiolo from Western Stima respectively.

All the transactions are accompanied by payment with a cheque drawn by Mumias Sugar Company, the new sponsors of AFC Leopards. The total transfer bill for Leopards footed by Mumias Sugar is Sh1,230,000.

The official website in the meantime also announced some guidelines for fan recruitment. Those who cant play for Leopards can still get membership by following the following details:-

AFC Leopards has issued guidelines to be followed by those interested in updating their membership status in view of the upcoming AGM.

Below are the guidelines.

1.Payment to be made to the AFC bank account in Cooperative Bank

2.Bank slip to be taken to club offices below for issuance of receipt and registration.

3.Office hours for remittance of bank slips for issuance of receipt – 4pm to 6pm starting Wednesday 26th January 2011, on weekdays only.

CONDITIONS
1. Membership registration is kshs 500/=
2. No individual is allowed to deposit money for more than 2 individuals
3. Membership for the purpose of participating in the AGM will close on the 6th of February 2011.
4. All queries to the branches co-coordinator (Alutalala Mukhwana) on 0737-467382.
Posted by Ingwe Fan at 9:27 PM