Update So Far: Leopards is embroiled in a fight for leadership with embattled Chairman having instructed a firm of Advocates, Mukele & Co, to represent the club in a case filed at the Milimani Commercial Courts. This is case number 8094 of 2010 filed in the Chief Magistrates Court. The case was filed by Ochiel against Robert Asembo, the embattled Secretary and ostensibly other parties to stop the elections that had been scheduled for 28th December 2010. (see previous post). The court set the case for hearing on 29th December 2010. The case was adjourned to 5th January 2011. It appears that Asembo raised a preliminary objection against the case arguing that the parties in the suit were wrongly described and the case was a non starter. The preliminary objection was argfued on 5th January and proceeded for hearing on 7th January. The court will deliver the ruling on 14th January 2011.

In the meantime, the protagonists in the case gave an interview to the Nation newspapers as reproduced below.

Monday Sport: What is the fight at AFC Leopards all about?

Julius Ochiel: The fight has been occasioned by the way our suspended secretary, Robert Asembo, mishandled his docket and abused the trust the members bestowed on him by filing a fake constitution single-handedly, a document that did not emanate from the club’s governing council.

We had our Special General Meeting and agreed on a constitution which we presented to the registrar only for Asembo to go behind our backs and present another document ten days later.

It is this that has brought the confusion because he has been pushing for his personal agenda while we are pushing for the betterment of the club.

When and why did you suspend Asembo?

I did not suspend Asembo.

It is the club governing council that summoned him after he presented a fake constitutional document to the registrar without the blessings of the club.

He was summoned and he confessed his wrong doing.

The governing council therefore decided to suspend him because he was working contrary to the direction the club was taking.

You have been accused of being the stumbling block to democracy at the club. What’s your comment on that?

That is their opinion, I have been accused of fearing elections yet I am also on the records suggesting January 9 2011 as the election date until some people went to court.

I just want elections to be held in accordance with the laws of the land and attended by paid up members of the club not street hooligans.

Those accusing me to be undemocratic are the same ones who are bringing problems at the club. Mark you, if the elections which they claim I fear are held today, I will still be elected chairman because of the positives I have brought at the club.

Players, fans and some officials have in the past hit at your style of leadership on the club, what's your take?

Of course in a democratic set up everybody is entitled to his own opinion. I have not been extremely perfect but whenever any issue has been raised, we have addressed it.

I think it is those who refused to adhere to the club’s statutes who have been complaining.

What is the future of AFC Leopards with you as the boss?

The future is very bright. We have just got a Sh15 million sponsorship and it’s a confirmation of the confidence the corporate world have in my leadership at the club.

We have signed new and very good players.

Our mission is to win the Kenyan Premier League this year and reach the finals of the regional championships and the Africa Champions League next year.

We want to bring back the glory of AFC Leopards. 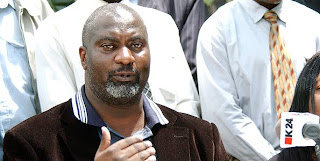 Monday Sport: Do you have any personal differences with Julius Ochiel?

Robert Asembo: I do not have a personal problem with the chairman but I have a problem with the way he has misinterpreted the constitution and has extended his term by another three years without mandate from the club members.

As a result of him imposing himself at the helm of the club for a longer period, the club has performed poorly as evidenced in the second leg of the 2010 Kenyan Premier League season where we started off at position 6 in June and ended up in position 12 in November.

You have been accused of presenting a fake constitution to the Registrar of Societies. Did you?

You need to realise that as the secretary -general I was the one mandated to present the document to the registrar so then issue of me presenting a fake document does not arise.

The constitution that is with the registrar cannot take effect. The fact that it was presented to the club executive and passed does not mean it is already effective. We need to go back to the members, who will vote for it before it becomes law. Ochiel is already using this constitution, which can be challenged anywhere.

Are you suspended as AFC Leopards secretary?

That again is what the chairman would want people to believe. I was elected by members of AFC Leopards and not the executive, who are equally elected; so, if there is anybody to suspend me it is the members. But there has never been a Special General Meeting where I suspended.

It is interesting that almost all the executive officials we were elected with in office are on my side, including the treasurer.

But the Governing Council states you are on suspension.

AFC Leopards has no governing council. What we have is an executive office elected by members early last year.

The so-called governing council is a group of people imposed by the chairman. They have no legal mandate from members to transact anything on behalf of AFC Leopards.

Why are you pushing so hard for elections?

I am not pushing for it alone; all we want is to respect the constitution of the club. Every official was elected under the old constitution, which is still effective.

An AGM will make everything right. It will, first and very important, give members an opportunity to pass or reject the new constitution, which I also feel is a good document. Then, the office will be given fresh mandate.

But we cannot just add ourselves more years in office because we have scribbled a new constitution. We must operate within the framework of the law we were elected with and seek fresh mandate then start operating under the new law.