New Kit On The Block

The leaked photos of the new AFC Leopards 2011 playing kit have hit the internet and no, we are not talking about this website. Leopards have kept the stripped shirt design that was used during the 2010 season though it appears a section of the fans still want to see the team kitted in the hoops design that was used in the 2009 season.

The kit also features the shirt sponsors Mumias Sugar Limited that has a hint of three bars with the green colour in their logo which means that Leopards will be having a shade of the colours of their arch rivals Gor Mahia on their shirts.

The team will be kitted by Adidas according to the leaked photos. In 2009, the team was kitted by Healy whereas in 2010 the kit manufacturers were not known. 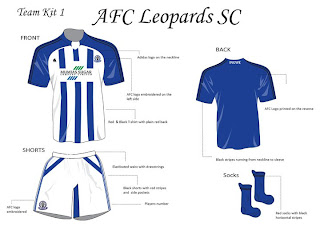 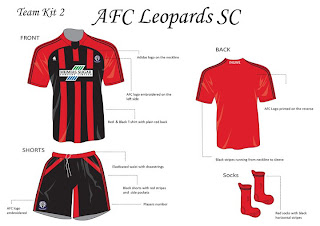 The club is also expected to unveil a cheer leader kit together with feminine wear. 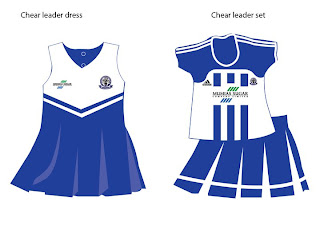 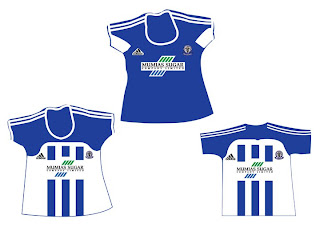 Over the years, the Leopards kit has undergone transformation and the team has seemingly gone back to its former stripped shirt that was worn in the 1970s and the early 1980s.
Most of the photos taken of Leopards in action in the 70s featuring players such as Moses Okwaro, Jackson Masika, Jonathan Niva, Daniel Anyanzwa, Vincent Mwenje and goalkeeper Julius Were feature the team in the stripped uniform of blue and white.
In 1982, Leopards wore the blue and white hoops for the first time and since then the team became even more successful winning most trophies it played in including the selection of League Titles, the East and Central Africa Club Cup championship that made the team regional kings and also competed in the continental championship to reach the Africa Cup Winners Cup semi finals in 1985.
The uniform that they used initially was an Adidas kit that featured three blue hoops. 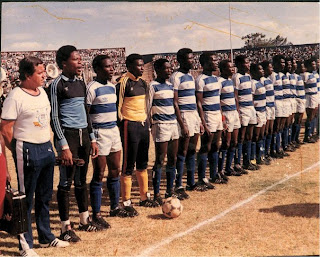 In 1986, Leopards enjoyed a sponsorship deal with Crown Paints and cemented the use of the hoops uniform that featured five blue hoops. The kit was Umbro and is still the kit that resonates most with many fans as Leopards became a household name in the whole of East and Central Africa and even beyond. The team had three kits, the blue and white as the home kit, the red and black as the away kit and a third kit that was in the yellowish shade. 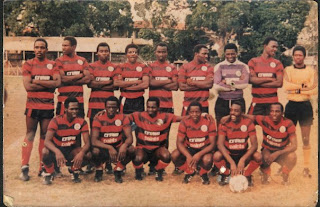 When the Crown Paints deal fell through after Crown Paints stopped their sponsorship of Liverpool FC, Leopards were thrown into some confusion and experimented with some uniforms. One kit featured a blue sash. 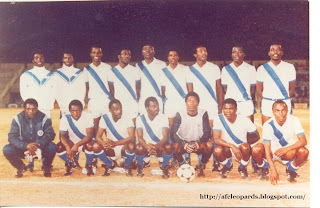 With fans not impressed with the sash, Leopards started playing in a kit that was the same kit as that of Queens Park Rangers whose sponsor then was Influence, a sportswear company. This seeemed to be a hastily made decision but the team appeared a whole season in this uniform. 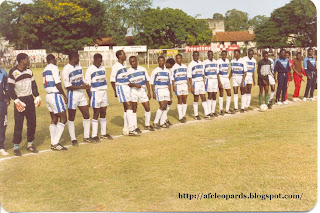 In latter years, Leopards played in a kit that had the logo of Cyperr International, a company that was owned by politician and businessman Cyrus Jirongo who was then Chairman of the team.
This is the team that won the 1992 League Championship. When the team lined up to face the Kenya Breweries team in the 1993 Super Cup sponsored by the Standard newspaper, the team was kitted in blue and white alright, but with a unusual combination of the colours. 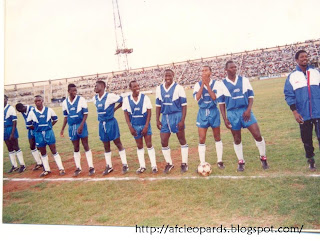 The fortunes of the club took a battering and the team struggled though in 1998, the team won the League Championship. This time, the team was kitted in blue and white stripped though the white stripes were very slim almost giving it a whole blue colour. Fans will remember that this is the kit that the team wore when they lost the proud unbeaten record in continental championships after going down 0-1 to Kampala City Council in the 1997 CAF Cup. 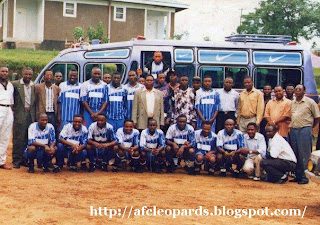 During subsequent years, the team played in an assorted range of colours including red shirts and white shorts and the occassional blue and white stripes without going back to the hoops. 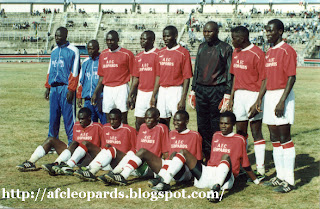 The team however adopted the stripes as its kit even as it tried other uniforms out. 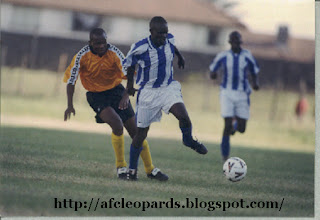 When the team qualified for the continental championships once again and was drawn against Al Mourada in 2001, the team turned out in a brand new kit that was half blue and half white. The kit was made by Prostar. 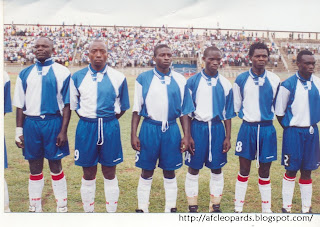 Subsequent to this, there were lean times for the team and the team also played in an almost plain blue uniform with upper shoulders clearly in white and white writings. 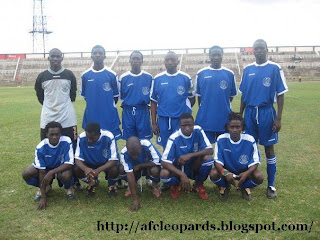 When the team played in the Nationwide League, the team wore blue and white stripes that also had the inscription AFC LEOPARDS in blue making the reading of the blue letters against the shade background of blue quite difficult. 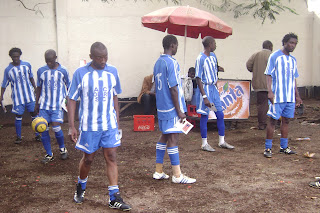 In 2008 after the club was promoted to the Premier league, the hoops made a comeback with four blue hoops. 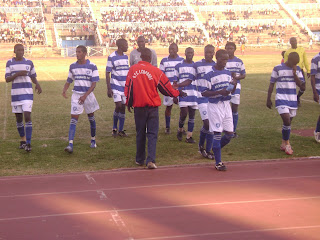 In 2009, the hoops were popular and the club had a replica shirt on sale for the first time in many years.
In 2010, the hoops were gone replaced with the stripes as the new administration took over. 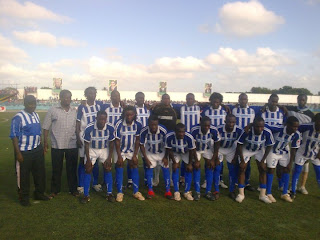 The jury is still out on whether the stripes will prove popular but it seems the officials have done an uncanny tact of going back to the roots. Some fans still wish to have the hoops but if they do so, they should not claim that this is the traditional kit of the team but that it is the kit the team wore when it was most successful in the 1980s. 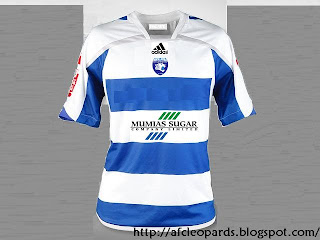 If you have any other photos of Leopards in different kit, please send an e-mail to the address below
claws.afc@gmail.com
Posted by Ingwe Fan at 9:02 PM