Leopards go to Afraha for the return clash against Western Stima.

Leopards had complained about the change of the fixture from Bukhungu. 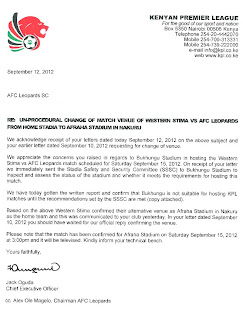 AFC Leopards coach Jan Koops has lamented the last-minute change of venue for their Tusker Premier League match against Western Stima on Saturday.

The match was supposed to be held at Stima’s home ground, Bukhungu Stadium, but due to the heavy rainfall being experienced in the region, the pitch is in deplorable condition.
However, reports indicate that the Power Men are imploring to shift the match to Nakuru’s Afraha Stadium, something that Koops is not pleased with as their opponents’ closest alternative venue is Mumias Sports Complex (Approximately 38km from Kakamega) – where they hosted Gor Mahia in June.

Furthermore, the league leaders – who are already in Mumias training for the match – were not informed in time about the changes.

“We are already in Mumias training for the match. We knew the match will be played at Bukhungu, that’s why we travelled yesterday to Mumias – close to the match venue. Even if the venue is not in good condition, they had enough time to communicate to us, something they didn’t do,” said the Dutchman.

Even though the final ruling on the venue is expected to be made in the day by the league’s technical committee, Stima are claiming that they cannot host the match at Mumias Sports Complex as it is Leopards’ second home ground.

“In Italy, both Inter Milan and AC Milan use San Siro as their home ground, how comes Stima are afraid of Mumias. They played against Gor at Mumias, but then it’s their home-ground I guess. Now how come they cannot host us at the same venue?”

“All the same, we are ready to play them at any venue. We are up for the three points, nothing less than. If it’s Afraha, we’ll travel to Nakuru on Friday.”

AFC Leopards defender Erick Masika will face a late fitness test to ascertain his availability for the team’s match against Western Stima this Saturday. The defender struggled with a harmstring in their last match against Tusker where he was eventually named man of the match.

The former Gor Mahia defender had just returned to first team action after missing two matches with a bout of malaria.

“Throghout this week he has been training lightly. The doctor advised that he does not train as vigorously as the others so we just let him train lightly on his own,” Coach Jan Koops told Michezoafrika.com.

“We will have a look at him when we arrive in Nakuru and see whether we can play him against Stima or not. We do not want to rush him because we have a very important match on the 23rd against Gor Mahia and we would rather let him take a total rest than risk him and miss his services against Gor Mahia.” Coach Koops adds.

Victor Ochieng will definitely miss the match against Stima as he is still out with injury. 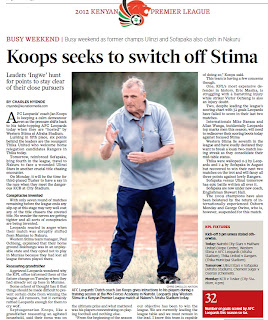 AFC Leopards’ coach Jan Koops is keeping calm even as the pressure shifts back to his table-topping AFC Leopards on Saturday when they are “hosted” by Western Stima at Afraha Stadium.


With only seven round of matches remaining before the league ends any slip-up at this stage may very well cost any of the title chasers the coveted title. No wonder the nerves are getting tighter and all sorts of conspiracies are being invented.

Leopards reacted in anger when their match was abruptly shifted from Mumias to Nakuru.
Western Stima team manager, Paul Ochieng, explained that their home ground Bukhungu was in an unplayable state and they opted not to play in Mumias because they had lost all league fixtures played there.


Aggrieved Leopards wondered why the KPL office informed them of the fixture change on Tuesday when they had already set up base in Mumias.

Some school of thought has it that things should be made difficult to prevent certain clubs from winning the league. All rumours, but it certainly rattled Leopards enough for them to cry wolf.

Septuagenarian Koops, like a grandfather reassuring an agitated household, said their focus was on the ultimate prize and what mattered was his players concentrating on playing football and nothing else.

“From the beginning of the season our objective has been to win the league. We are currently leading the league table and we must remain in the lead. I know this team is capable of doing so,” Koops said.

This team is having a few concerns though.

One, KPL’s most expensive defender in history, Eric Masika, is struggling with a hamstring injury while striker Victor Ochieng is also an injury doubt.

Two, despite leading the league’s scoring chart with 32 goals Leopards have failed to score in their last two matches.

Internationals Mike Baraza and Allan Wanga, incidentally Leopards top marks men this season, will need to rediscover their scoring boots today against focused Stima.
Western Stima lie seventh in the league and have loudly declared they want to break a lousy two-match losing streak as they consolidate their mid-table status
Gilbert Wandera of the Standard wrote:-

Western Stima coach Henry Omino has vowed to switch off the lights on title chasing AFC Leopards and leave them groping in darkness when the two sides meet on Saturday in a Kenyan Premier League (KPL) tie at Nakuru’s Afraha Stadium.

“By all accounts it will be an explosive match between two ambitious teams. They are chasing the title while we want to finish among the top five. The three points are very important for us and we are determined to do everything possible to have them on Saturday,” said Omino.

Omino said his side goes into Saturday’s match determined to increase their points tally and have an advantage over their potential opponents for a top five position.

“There are teams behind us who are close by and will overtake us if we drop points,” said Omino whose side lies in seventh position.

Omino admitted the last minute change of venue from Bukhungu to Nakuru has taken away their advantage, but insisted they are ready to play anywhere.

“Being away from home always denies you the advantage, but I have prepared my players to be able to cope with such pressure,” said the veteran coach.

Stima lost the first leg match to AFC Leopards 1-0 (Correction: It was 2-1) at Mumias Complex giving them the motivation to overturn the result.

So far Stima have surpassed last season’s performance when they finished outside the top ten.

It is a match that Leopards coach Jaan Koops admitted means everything to them as they fight to protect their slender lead at the top of the log
Leopards will therefore put out their best squad and may see Paul Were coming back to the midfield to supply hit men Allan Wanga and Mike Barasa.
Futaa reported:-

On Friday 14 September, Football Kenya Federation and Kenyan Premier League officials held a pre-event meeting to assess the security arrangements ahead of the Saturday 15 match between Western Stima and AFC Leopards.

The evaluation process, a procedure set out for all ‘high-risk’ matches was conducted at 0900hrs, with officials from both clubs in attendance.

Initially there were only 20 police officers assigned to take charge at the match, but we requested the Officer Commanding Police Division [OCPD], said an FKF communication officer.

For crowd control, the OCPD confirmed that his charges will bring along dogs. They would have provided horses, but unfortunately the notice was short, as they have to be ferried from Naivasha.