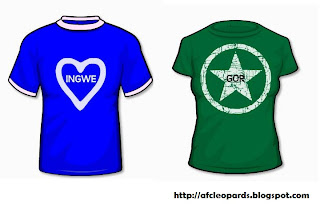 And everybody is talking about it. Literally.

In arguably a Kenyan first, a media house, Kenyanstar, has produced a podcast on the match that is available for download here

The print media has also been awash with stories about the derby which was originally set to take place on 23rd September but was preponed to 22nd September eliciting this report by the Daily Nation. 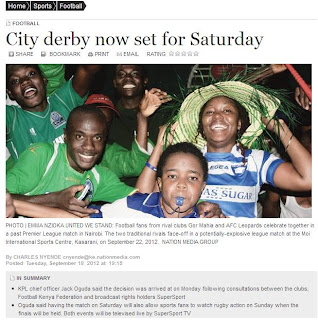 Charles Nyende wrote and we quote:

The much-anticipated Tusker Premier League return match between AFC Leopards and Gor Mahia has been moved from Sunday at Moi International Sports Centre to Saturday at the same venue.


“It was noted that security will be stretched having the two big events in the city and it will be prudent to have the match on Saturday. Nyayo Stadium will host the annual, crowd-pulling Safaricom Safari Sevens from Friday to Sunday,” Oguda said.

Yes. The egg-shaped ball pulled a fast one over the spherical one!

Leopards fans have been scratching their heads at the string of recent string of bad results. They could be asking where Leopards mojo has gone. Well, actually the Standard was asking that! 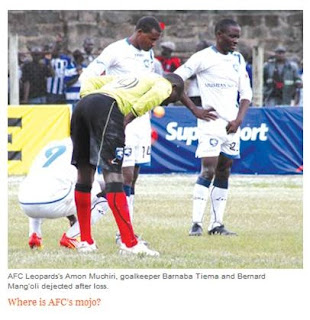 Cliches are being thrown, the one which is most stomach-churning being 'wounded Leopard'. And of course 'on form Gor Mahia'.

Hopefully, form will count for nothing when the two giants of Kenyan football clash in the 25th round of matches of the Premier League this season.

Historically, the league clashes have the following record with the Leopards enjoying bragging rights having won 25 out of the 71 matches played, drawn 27 and lost 19. 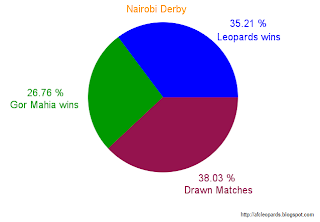 The 72nd derby promises to be one of the most evenly contested as the winner will take great strides to wards winning a league title for the first time in over a decade for both teams.

Gor are on 43 points and a win will propel them to 46 points, 1 point above Leopards. A win for Leopards will open a 5 point gap on Gor. A draw will of course leave the two teams separated by 2 points and may leave the other teams chasing the championship with glee at the Swahili saying 'vita vya panzi, furaha ya kunguru' (when crickets fight, it brings joy to hovering ravens).

Tusker lead the table whilst Leopards are currently perched at second position in the league with Gor hot on their heels at third.

Leopards are also currently camped at Mumias and there are plans to fly the team back to the City of the Derby on Thursday according to reports from Futaa.

The team has been in camp in the Western Kenya town since Sunday 16 September after the 1 – 2 loss to Western Stima and according to coach Jan Koops, they will have a last training session on Thursday morning before taking the flight to Nairobi.

"We will have a morning training session from around 0800hrs to 1000hrs; it will be our last training here in Mumias. We will afterwards leave for Kisumu to take a flight to Nairobi for the final preparations for the game".

High flying Gor on the other hand are camped in Nairobi and reports from the Gor side are that the team is in high spirits. The official (on-off) Gor Mahia website writes:-

Rachier (club Chairman) says there is Great Spirit of unity at the club with the entire management talking with one voice in total support of the team.

In an interview with www.gormahiafc.co.ke Rachier says while AFC Leopards are wounded and will be coming into the game with sharpened claws, Gor Mahia is not taking it lightly.

“AFC are wounded as such will come fighting like never before. We as Gor Mahia’s management have done all that it takes to win,” he said.

This has the ingredients of a humdinger and with the fans having caught on the Derby Fever, we just can't wait!