David Kwalimwa of Goal wrote on the newly launched Kenyan version of the website:-

On Saturday afternoon, most traffic in Kenya's capital Nairobi is expected to lead towards the 60,000 sitter Moi International Sports Centre Kasarani (MISC) where the biggest match in Kenyan football history is expected to take place.

The duel, in which two of the biggest clubs in Kenyan football will lock horns in the battle for the 2012 Kenyan Premier League title, is no ordinary game and this will be no different.

The stakes are much higher in this winner takes it all contest. Goal.com Kenya takes a look at FIVE factors that could play a pivotal role in determining the outcome of the contest.

The most important parameter.

The last league match involving these teams was halted for almost half an hour due to crowd trouble. The incident was propelled by a send off to Victor Ali for an awkward lunge on Amon Muchiri midway through the first half.

Handling this match will be difficult for any official. Word trickling in from the administrators seems to suggest that future encounters could be handled by foreign referees.

Damaris Kimani, one of the most experienced and respected officials in the country, is expected to handle this duel.

She will be advised to have her grip on the proceedings, clamp down on unnecessary tackles and moves that could highlight tension, and as expected remain neutral.

The duo will be tasked with selecting the match day squads and controlling the proceedings from the technical bench for the 90 duration of the match.

Jan Koops has in the past few weeks been facing his most challenging moments since assuming the coaching role at the helm of AFC Leopards.

This has been due to the dismal performance and emergence of Gor Mahia, under Logarusic. Both managers are respected in most quarters for turning the fortunes of the two clubs since assuming the reins.

Logarusic holds the upper hand in a head to head contest, following the Top Eight title triumph earlier this season.

However, this match will be key. Both sets of fans can withstand, or drink away any defeat in the league, but not one suffered against the other. The only match played between these two sides with both coaches in charge ended in a stalemate.

The English say statistics never lie. Both teams have three players who have proven the catalyst in their respective campaigns.

AFC Leopards will need Patrick Matasi, Mike Baraza and Erick Masika fit and firing in all cylinders to stand a chance.

The trio have played influential roles for the side during this campaign, with Baraza's catching the eye of new Harambee Stars coach Henri Michel, while Masika's absence was genuinely felt during AFC Leopards last week's loss to Western Stima.

Gor Mahia on the other hand will be banking most of their hopes on Rama Salim, Ivan Anguyo and Dan Sserunkuma.

Midfielder Rama Salim acquired from Congo United during the start of the season, leads the goal scoring charts for his club with nine goals, while Sserunkuma and Anguyo have not only held their lines well, but chipped in with important strikes.

In particular, the partnership between Sserunkuma and Rama Salim will be very decisive.


Saturday's match will not only be contested on the pitch, but at the stands as well.

The stakes are high. Losing is not an option. AFC Leopards players and technical bench got a sneak preview of how wrong things could get, after the fans surrounded their bus following their recent defeat to Western Stima and threatened tom assault the players. For Gor Mahia, the consequences of losing might be worse.

In the meantime, both sets of teams are assured of 'full' moral support from the onset, with different versions of encouraging/mocking songs doing the rounds from the stands.

Both teams will be advised to take full advantage of the support, for as long as it lasts.

The first goal (if any) will be crucial). If Kogalo score first, they have previously proven to protect such a crucial lead and could quite capitalize on the fragility in form and mentality of their opponents.

However, if AFC Leopards score first, the scenario could be real tricky. Gor will be forced to attack and this could play into the hands of AFC Leopards, managed by a Dutchman, who has set his team up for the counter attack.

Gor Mahia with an inferior points tally compared to their opponents, need the win more, and it would be crucial on how the approach this duel from the onset.

AFC Leopards are also in a catch 22 situation, having allowed defending league champions Tusker FC to claw back into the title race, and a draw or lose could be as dangerous to them as it will be to Gor Mahia.

In the run up to the second meeting of the season between two of Kenya’s most successful clubs; Gor Mahia and AFC Leopards, on Saturday 22 September, Gor Mahia is looking forward to stretching their unbeaten run to 14 games.


The team is undoubtedly the on form side in the country’s top flight and deputy chairman Faiz Ochieng says they are ready for the AFC Leopards challenge at the Moi International Sports centre (MISC) Kasarani.


Speaking to futaa.com, the K’Ogalo official insisted that the team is not only looking to win the game but to finish the season unbeaten and called on fans to be at the stadium early and in numbers to cheer their team.


"We are well prepared just like in any of the matches we have played previously and we are going for the three points not just to stretch our unbeaten run but also to prove that we are strong contenders for this year’s championship.

We are looking to finish this season without losing and I am calling on the fans to come in large numbers and early enough to cheer the team to victory", he said.

The match is scheduled to kick off at 1500hrs.

Gor Mahia coach Zdravko Logarusic is back in Nairobi ahead of his team’s crucial clash against AFC Leopards on Saturday.

Logarusic who was on holiday in his native country Croatia believes that there are no favourites when the two sides clash as he admits that they respect Leopards.

“I just arrived from Croatia where I had gone for holiday plus with such a break I found it ideal to give time off to players because they were suffering from fatigue and others were injured and needed special attention.”

“We must think while coming into this match because there are no favourites in a derby, it is a 50-50 game plus we give respect but not all to Leopards since they have been on top of the league this season.”


He also pointed out what will decide who walks away with the points.

“Small mistakes will influence the outcome, it could be an individual mistake at the back or brilliance at the front. All I want is for the fans to enjoy the game.”

Gor are third on the log with 43 points, two adrift table toppers Tusker and AFC Leopards who are level on points.

They will be looking to extend their unbeaten run in the league to 14 games this weekend.


Meanwhile after the efforts of the fans to get the club a bus, the club finally had the bus presented to it on Friday at General Motors.

MichezoAfrika reported:-
AFC Leopards'  bus christened  "The Monster" is set for its maiden trip tomorrow after a colorful launch at the General Motors yard on Friday afternoon. The  37-seater Isuzu Model FRR-33L ,registration number KBT 194D will ferry players to Kasarani on Saturday and from the look of things should steal some limelight from the game on the pitch. 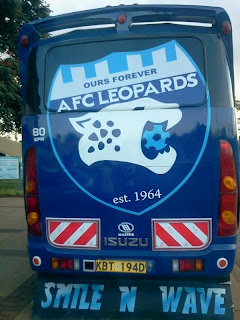 A total of Ksh 5.6million was splashed for the 8-litre engine machine, a feat unrivaled by any other club in Kenya. The insurance details have also been finalized.

It has a 32 inch Sony Bravia flat screen inside, fluorescent lighting system, a state of the art air conditioning and an indoor public address system. Players will no longer worry about charging their iPhones, Lumia 920 or Samsung Galaxy III smart phones as every seat has a charger and is adjustable to allow them comfortably relax.

Chairman Ole Magelo while receiving the bus  said: "I thank Ingwe family for what you have done. This is great and will keep us in the right mood for the derby"
Posted by Ingwe Fan at 6:25 PM