Gor Mahia beat AFC Leopards 2-1 to leapfrog the Leopards on the league table.

Dan Sserunkuma scored a brace as Gor Mahia edged out arch rivals AFC Leopards 2-1 to go top of the Tusker Premier League with 46 points on Saturday. 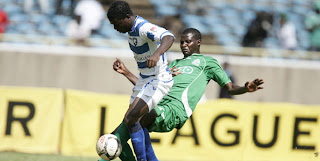 Sserenkuma struck first the 13th minute after tapping in a rebound from Kevin Omondi’s shot. From a harmless short corner, Sserunkuma’s rasping shot in the 36th minute, a strong contender for the goal of the season, went past AFC goalkeeper Patrick Matasi to put Gor 2-0 up at the break.

Leopards pulled a goal back through Mike Barasa in the second-half but could not find an equaliser as Gor continued their amazing recovery after an abysmal start to the season. Gor are now unbeaten in 14 league matches.

Following the win, Gor lead the standings with 46 points, one ahead of defending champions Tusker who have a game in hand. Leopards drop down to third with 45 after suffering their third defeat in four matches.


Going into the match, Gor were favourites and settled into match quickly, dominating the first half.


Leopards made a double substitution at the break, bringing on Paul Were and Abass Kiwalabye and the move paid off as a neat Allan Wanga flick put Mike Barasa through on goal and he coolly scored at the near post.


The home side were energised by the goal pinning Gor back in their own half with skipper Martin Imbalambala going close on 73 minutes.


But Gor held on for victory with the final whistle sparking off a massive party as the Green Army celebrated a win over their arch nemesis.

Gor Mahia have the audacity to dream of clinching the Kenyan Premier League (KPL) title after stopping archrivals AFC Leopards 2-1 at the Moi International Sports Centre, Kasarani.
Gor have their chest in front in the final sprint to the championship after claiming maximum points against their opponents to go on top of the standings for the first time this season. However, this could change if Tusker beat Karuturi Sports in Naivasha today.

Ugandan import Dan Sserenkuma scored a double for Gor, drawing the first blood in the 14th minute after he finished off a Kevin Omondi move.

Jonas Nahimana failed to clear a loose ball in his danger zone allowing Kevin Omondi to beat him and Patrick Matasi had a hand on the final shot, but it hit the post and rebounded to have Ssrenkuma calmly slotted home.

The second goal arrived when Gor worked a short corner and the Ugandan arrowed at the roof of the net with a thunderbolt outside the 18-yard box in the 36th minute and Matasi could only watch from his position.

Leopards’ Mike Barasa scored the only goal in the 57th minute after taking advantage of a defensive lapse to hit his seventh of the season.

Saturday’s match was a balanced affair with Gor staying supreme in the first half, but lacked the energy to take it to the end. At one point they resorted to time wasting tactics a situation that earned defender Ivan Anguyo and Victor Abondo cautions from referee Sylvester Kirwa.

Leopards had only one chance at goal in the entire first half when Allan Wanga drew a fine save from goalkeeper Jerim Onyango after 25 minutes. Gor on the other hand had at least a dozen chances and should have had a wider lead in the half.

It was a different Leopard’s side in the second half though. Ingwe showed more purpose and determination especially after the inclusion of Paul Were.

Even after Barasa’s goal, Leopards had two other clear chances to get at least a point from the match. Were missed from just outside the 18 yard with a curled free kick that Jerim Onyango just had his hand on for a fruitless corner. Then Martin Imbalambala watched in disbelief as his cross-shot went just wide.

Leopards seemed to be having internal problems at the technical bench following reports of sabotage and on Saturday only one assistant, Mickey Weche was allowed to sit with head coach Jan Koops on the bench
MichezoAfrika wrote:-

Danni Sserunkuma was the chief destroyer as Gor Mahia beat arch-rivals AFC Leopards 2-1 to win the derby, bragging rights and also move to the top of the Tusker Premier League log.The thrilling encounter was played at Kasarani Stadium and watched by millions of fans inside the stadium and all over the world.

Sserenkuma struck first  the 13th minute after tapping in a rebound from Kevin Omondi’s shot. From a harmless short corner, Serunkuma’s rasping shot in the 36th minute ,a strong contender for the goal of the season, went past Matasi to set Gor Mahia 2-0 up at the break.

Allan Wanga’s header from Augustine Etemesi cross was the major save Gor keeper saved in the first period .On the other end, keeper Matasi had a busy day in office in preventing Rama  Salim,Moses Odhiambo and Serunkuma from inflicting further damage.

AFC leopards were clearly the better side in the second period especially after the introduction of Paul Were  who came on for Ndayisaba in the 51st minute. The former Tusker man immediate impact was an assist to Mike Barasa who pulled one back for Ingwe.

The goal seemed to have worked magic on Ingwe players who gave a fight of their life to put the green army in great suspense especially in the last minutes of the game. Their efforts however did not yield any more goals.

The win pushed Gor Mahia to the top of the league standings in years while AFC leopards has now been pushed to the third slot, With five games remaining and only a point separating  Gor and AFC,the title chase is still a long way to go but for now, Gor Mahia can enjoy “Shemeji”  derby winner tag.

A fine display at the Tusker Premier League (TPL) encounter at the Moi International Sports Centre (MISC) Kasarani between AFC Leopards and Gor Mahia ended 2 – 1 in favour of K’Ogalo as the team in green registered their 14th unbeaten game in the league.

The first half belonged to Gor Mahia as they run AFC Leopards rugged; and they were duly rewarded in the 13th minute when a miss by Rwandan international Jonas Nahimana after a fine first touch allowed Kevin Omondi to steal the ball and race through.

Omondi’s shot with just Patrick Matasi to beat was tipped to the post by the keeper and the rebound rolled on to Ugandan born forward Dan Sserunkuma for the easiest of tap ins, a big gift, and his celebration said it all.

Leopards quickly shifted gears and initiated attacks of their own. A notable one was on 24 minutes when Bernard Mang’oli crossed from the right but Allan Wanga’s well placed header was equally superbly saved by Jerim Onyango for a corner which was eventually cleared.
Ten minutes later, Rama Salim’s cross from a free kick was punched out for a corner unconvincingly by Matasi for a corner. Moses Odhiambo stepped forth and took the corner short to Sserunkuma who took a first touch then left Mang’oli for dead with the second before releasing a cracker of a shot to the top right corner.

All was fine for K’Ogalo that far as they headed to the break with a healthy lead.
The tables were however turned in the second half; AFC Leopards coach Jan Koops withdrew Idrissa Rajab and Floribert Tambwe for Abbas Kiwalaabye and Paul Were respectively and Gor Mahia lived dangerously thereafter.

Sustained periods of pressure led to a Donald Mosoti blunder in the 57th minute as he misjudged a through pass to allow Mike Baraza in. The Kenyan international calmly raced through to slot AFC Leopards first goal.

Another defensive mix up on 74 minutes allowed AFC Leopards captain Martin Imbalambala to win the ball on the right channel and his low cross sailed across the face of goal just begging to be tapped in but Mike Baraza, the target was too far.

Edwin Lavatsa a second half substitute in place of Sserunkuma should have sealed the game for Gor Mahia after leaving Nahimana crawling on the deck but he opted for a shot from a tight angle with Rama Salim shouting for a pass and Matasi made a rare save.

GOR Mahia went to the top of the Tusker Premier League table after beating historic arch rivals AFC Leopards 2-1 on Saturday at the International Sports Centre Kasarani, with Ugandan import hitting the double for the victors.

In the 2012 Premiership title chase which ends on November 12, Gor Mahia suddenly held destiny in their own hands. On 46 points with five matches to go, K’ogalo lead second and third-placed Leopards and Tusker, respectively, by a point.

Tusker, however, have played 24 times and their catch-up match on Sunday against Karuturi Sports at Oserian, Naivasha, on Sunday will be of great interest to buoyant Gor Mahia supporters.

Victory for Tusker would wipe out the Gor lead, putting the Brewers on top, and two points clear.

For the final outcome, it will then boil down to how the top four teams, including Thika United, fair [ six points adrift Sofapaka and Ulinzi Stars are long shots] in their remaining five to six fixtures each, which will be:

Dan Sserunkuma’s two first half finishes seemed to have smashed Leopards into submission and it was big credit to Tusker Premier League football that Leopards dragged themselves back from the dead with a blistering second half play and almost took a point from the encounter.

Kevin Omondi stole ball from a Jonas Nahimana hesitance, surged forward to hammer at Patrick Matasi in the Leopards goal. A rebound off the ‘keeper fell to Sserunkuma to tap him for the opener in the 13th minute.

Leopards tried a quick response and most notable was Bernard Mang’oli’s 24th minute cross from the right which Allan Wanga headed well but the Gor Mahia skipper, Frederick Onyango in goal punched out for a corner.

But Gor Mahia were to tighten their grip on the opening period , going 2-0 up in the 36th minute. Their attackers were always in their stride and were to be rewarded when Ramadhan Salim created the opportunity with a floated free-kick being punched out for a determining corner.

Moses Odhiambo was creative enough, taking the corner short to Sserunkuma, who had a first touch and then beat Bernard Mang’oli with control before firing into the top right corner.

At that juncture, the genuine fears among dejected Leopards supporters were that their team would be run ragged.

But on the pitch, Leopards felt that the incidents resulting into the goals were unfortunate and that they had not necessarily been outplayed. They made a fight of it and Gor Mahia just only managed to take their healthy lead into the beak.

Jan Koops tried to steady the Leopards’ ship with early substitutions after the interval. He took off Idrissa Rajab and Floribert Ndayisaba and in came Abbassi Kiwalabye at the back and Paul Were up front.

It paid. After sustained pressure Gor Mahia cracked in the 57th minute and Mike Baraza forcefully broke through to score, cutting the lead.

In the 74th minute another great opportunity fell for Leopards, skipper Martin Imbalambala down the right but his cross by the face of goal needed a teammate for a simple tap in for the equaliser. Baraza, however, was three metres too behind.

Gor also had opportunities to stretch their lead, Edwin Lavatsa, a second half substitute for Sserunkuma, leaving Nahimana crawling on the deck shooting off target possession that would have suited a waiting Salim’s finish.

The Gor Mahia win, though climaxing a spectacular 14-match unbeaten streak and tipping the odds towards a team that was at one time 17 points behind Leopards, by no means delivered a decisive blow to Leopards’ own aspirations for the league title.

If ‘Ingwe’ can buckle down and turn-around an uncharacteristic run of four matches without victory, including three defeats, they would still be part of a thrilling finish to another Premiership season. 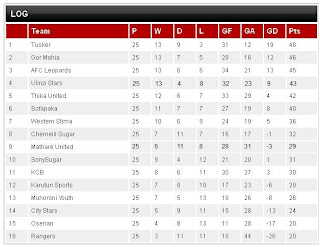