Was it a case of two points dropped or one point gained?

Leopards drew 0-0 with defending champions Tusker last night at the Nyayo National Stadium leaving them four points clear of Tusker though the latter have a game in hand. 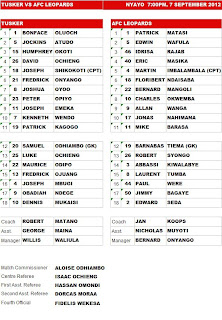 The two teams started the match on attack, each side threatening to take the other.

In the 11th minute, Joseph Shikokoti got  on the end of a long throw-in from the right, touched it,  before Joseph Emeka got it to send a powerful header goalwards. Matasi did well to pick the ball but.

Two minutes later Mike Baraza outplayed Tusker's defenders on the right, but his release scraped past the post.

By the half-hour mark the ball had settled in the midfield, with each side applying caution.

In the second half, the teams continued piling pressure on each other.

Tusker picked three yellow cards in the half, against AFC’s none.

After the draw, the two teams are at the top of the league, with AFC, who have 45 points, taking the premier position and Tusker coming in four points behind.

The Tusker Premier League title destiny took another twist on Friday after the top two teams,AFC Leopards and Tusker FC, played to a barren draw in an entertaining match played at a floodlit Nyayo Stadium.


The result means the top two positions remain unchanged for now  but third placed  Gor Mahia would be the most happy side  with the result as they could cement the second position and reduce the deficit against AFC Leopards to just two points with over Sony  on Sunday.Fourth placed Sofapaka and Tusker have a match at hand against each other whose results will be critical in shaping the top five positions.

Tusker then won a free kick at the edge of the box after Wendo was brought down by Wafula. Atudo’s shot evaded the wall but couldn’t hit the target.

In the 29th minute Patrick Kagogo made inroads into the AFC box but was to slow to inflict any damage thus allowing the defenders to clear.

Five minutes to the break, Tusker won a free kick that Joshua Oyoo executed well but the ball was headed out for a goal kick. Tusker had the best chance in the closing minutes of the first half but Joseph Emeka ‘s effort went wide. Patrick Kagogo had worked hard to supply the cross.

After the break, AFC had the first clear chance. Mike Baraza did well to beat his marker then sent a cross to Allan Wanga who turned well but his shot went off target.

Paul Were entry for Floribert Ndayisaba injected some pace to AFC game. The former Tusker man troubled his former teammates and won numerous free kicks that all went to waste.

Tusker had another Patrick Kagogo’s shot in the 71st minute from a peter Opiyo cross. Eight minutes to the end Kagogo had his free kick shot blocked for a throw that Jockins Atudo wasted.

Jockins’ Atudo’s late professional  foul on Paul Were ensured he could not shoot but the resultant free kick also missed the target to endure both teams just collected one point each after 90 minutes of sweat.

AFC defender Eric Masika was named the DSTV man of the match after the game.

TOP-of-the-table AFC Leopards and Tusker battled to a barren draw in Friday night action at the National Stadium in Nairobi, ceding some ground to the chasing pack of four in the title race.

It was the first fixture since the league officially adopted the name Tusker Premier League on Thursday, following a Sh170 million sponsorship.

Two cautious teams put too much premise on not letting in a goal. Gor Mahia, Sofapaka, Thika United and Ulinzi Stars, will thus be happy that Leopards at the lead of the log only added a point to their tally instead of three. Sixth placed Ulinzi [47 points] are, however, eight points adrift.

Tusker had the first real chance when on the other end their captain Joseph Shikokoti got to the end of a throw-in from Joseph Emeka and his header was stopped just in time by Leopards ‘keeper Patrick Matasi.

Then two minutes Mike Baraza dribbled past Tusker defenders and almost scored from the right but his shot scraped past the post.

Despite Tusker having the slight edge in ball possession inside the first 30 minutes, Leopards had a second opportunity to score, Allan Wanga running up at the defence in the 26th minute and his shot being stopped by Boniface Oluoch in the Tusker goal.

Oluoch was again to do well stopping Wanga from a similar run in the 41st minute.

After the break, Baraza, Charles Okwemba and Floribert Ndayisaba and Wanga pressed but Tusker stood firm.

Then for Leopards, Eric Masika had to clear a dangerous ball on the right in the 62nd minute and that was just moments after Emeka had fired at Matasi who spilt the ball to go out for a corner.

Supersport wrote about the MVP:-

AFC Leopards’ defender Eric Masika was named the Most Valuable Player on Friday after producing an efficient display to keep champions Tusker at bay in a league encounter.

Receiving the nod, Masika attributed the great day to proper gelling with fellow teammates and a proper tactical approach by the technical bench.

“I think we played very well, with each and every member of the team playing his role well,” said Masika after the match.

“The technical bench also had a tactical approach to the match and it kept things running.”

Masika then went on to brush aside the one-match advantage that Tusker have in their hopes of narrowing the gap between themselves and Leopards.

“Tusker may have a positive match advantage, but that does not mean that they have the points,” he said.
He also affirmed his coach’s opinion that they would play their remaining games the best way they know how, instead of worrying about their opponents’ progress.

“We have a team that plays as a unit and as long as we keep playing like this, then we should be well on our way to the title.”


Leopards are still at the top of the table, followed by Tusker, who come in four points behind (with one game at hand against fourth placed Sofapaka). 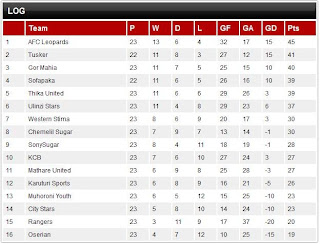