Leopards travel to Kisii for the return clash against Sony Sugar.

AFC Leopards SC defender Edwin Wafula believes that his side can beat SoNy Sugar FC on Saturday 7 July and narrow down the gap at the top.

Leopards ended their five-game winless streak with a crucial 1-0 over Sofapaka FC, something that the Under 23 fullback says really inspired the team.


"Everybody is focused and we are going for nothing but the maximum points", Wafula told futaa.com.

"We are targeting to narrow down the gap at the top. God willing, we will come back in the City with a win", he added.

In the first leg tie, played at Mumias Sports Complex, the match ended in a barren draw. (It was 1-1 - Ingwe Fan)

Leopards are ranked third on the table with 31 points, four behind leaders Tusker FC. 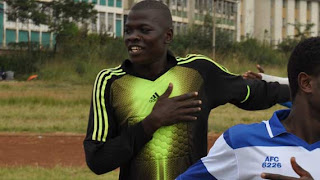 AFC Leopards first choice custodian Patrick Matasi is yet to recover fully from sickness but has been able to train with the rest of the team for the whole of this week. Matasi has been sick since dropping out from the Harambee Stars camp early last month and has missed two AFC Leopards’ fixtures.

“We are very happy to see him active again because we were really concerned about his health. He was very sick and seeing him train with the rest of the players smiling all the time is exciting for us,” Coach Jan Koops told Michezoafrika.com.

The Coach says they will not field him just yet until they are convinced that he is fully recovered.

“Of course we miss him in the team and we would love to see him play. However, his health is more important than football and we cannot just yet throw him into the pitch. In the match against Sony, he will just sit on the bench as a substitute,” Koops adds.

Barnabas Tiema has stepped in well and has conceded a single goal in Leopards’ last two fixtures.


Ticketing information on Futaa is here

Tickets for the Kenyan Premier League match between SoNy Sugar FC and AFC Leopards SC will go on sale on Saturday 7 July, at Gusii Stadium, starting 0630hrs till 1130hrs.

According to SoNy Chairman Chris Odero, the VIP and terraces tickets will be sold at Kshs 200 and Kshs 100 respectively.

"Tickets will be sold at the main entrance of the Stadium", Odero told futaa.com. "To avoid the rush, we urge the fans to come early and enjoy the match", he added.

The match will kick-off at 1500hrs local time.

Carol Radul predicts a 2-0 victory for the Leopards.

Zedekiah Otieno had one excuse for not doing well in the first half of the season.

This Sony Sugar side was full of another coach’s players, not his. Zico said he couldn’t work with those players and his employers gave him the lee-way. Zico has since signed heavily during the break and is now confident of going all the way in the second half of the season. He says we will all see a very different Sony Sugar.

However most of his signings lack experience and that could be detrimental to the former Gor tactician. But he seems confident.

Today he is facing AFC Leopards for the second time in three weeks. Their postponed match that was finally played on the 20th of June ended in a draw, but both sides were coming out of a three week break.

Sony’s newboys had not settled while Ingwe just appeared out of form. Leopards may have woken up to defeat Sofapaka 1-0 ten days ago but they did get a lucky goal which was more Sofapaka’s fault than Ingwe’s genius.

And talking about that game, Martin Imbalambala came through to give a sterling performance. The acquisition of former Rangers captain Pascal Ochieng will give Ingwe arguably the tightest defence in the league, but it will also mean Imbalambala being returned to his midfield position.

This will be an exciting match but I’m with the white dude here.

AFC Leopards tactician Jan Koops will use the same line up that beat Sofapaka last Wednesday as he seeks to harvest maximum points in their away trip in Kisii against Sony Sugar. Leopards will be buoyed by the fact that second placed Sofapaka fumbled and lost two points against Muhoroni Youth on Friday night and will be seeking to take advantage of the slip up.

First choice keeper Patrick Matasi is yet to fully recover from sickness and he will start on the bench with Barnabas Tiema continuing his stint between the posts. No nonsense Edwin Baraza will be at right back, Tanzanian Idrissa Rajab will play his third match for the Leopards at left back.

Jonas Nahimana and Erick Masika will partner at the heart of defense with the midfield being run by Bernard Mang’oli, Martin Imbalambala, speedy winger Paul Were and Laurent Tumba. Mike Barasa and Leopards top scorer Allan Wanga will lead the hunt for goals.