Leopards start the second leg of the 2012 KPL season with a home match against Sofapaka tonight. It is the battle of second versus third on the league table.

The usually dominant Leopards have gone five Kenyan Premier League matches without victory and are desperately in need of one, if they are to get their title campaign back on track.

They face off with Sofapaka today, Wednesday 27 June 2012 and Weche wants them to start with victory, though he admits it will be tough but wants victory to lift the club.

-Playing against Sofapaka will not be easy. They are very hard to beat and can cause anyone problems on a good day.

-Last time they beat us and we just want to make sure that it is not the same this time, though it will be very difficult for us. We hope for the best, he told Futaa.com.

Leopards will remain third in the current KPL table regardless if the result today, though a win will reduce the gap between them and Sofapaka to just one point.
KPL website reports:-
PAUL Were makes his debut for AFC Leopards tonight as the team starting against Sofapaka shows several changes to side that drew 1-1 with Sony Sugar last Wednesday.

Were came from champions Tusker but was not even on the bench at Mumias last week. Leopards captain, Martin Imbalambla, who came off the bench last week to replace Samuel “Misse” Mwangi, returns to the starting line-up in front of the back four of Edwin Wafula, Eric Masika, Jonas Nahimana and Idrissa Rajab. Abbas Kiwalabye drops to the bench.

Edward Seda, the surprise starter in the middle of the park drops off completely alongside Mwangi and incomes Laurent Tumba and Were.

The Leopards v Sony match was a catch-up fixture, postponed from the first leg and therefore Leopards and Sofapaka, just like when going into the mid-term break, will be kicking off their Kenyan Premier League second leg, unlike other teams that did so over the weekend.

Goals by John Baraza [13th and 60th minute] earned Sofapaka a 2-1 win last time, on May 16, Leopards replying through Imbalambala in the 68th minute.

Sofapaka have kept virtually the same shape, save for the departed Musa Mudde in the middle of the park. His place has been taken by ex-Gor Mahia Collins Okoth. Sofapaka will also bring on to the bench talented defender Abdulatif Omar, kept off for over 18 months by a long time injury. The left full-back hopes to ease in during a rehabilitation period. 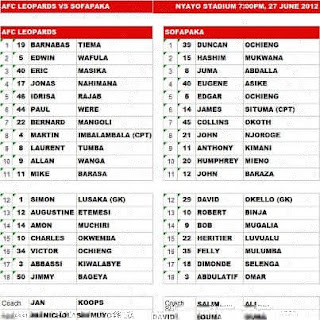 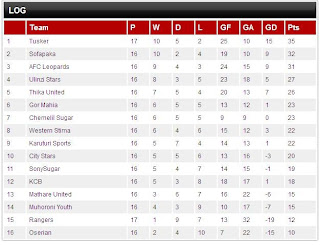