Leopards drew 1-1 with Sony to conclude the first leg of the 2012 season.

Hosts AFC Leopards shared the spoils with Sony Sugar in a rescheduled and well attended Kenyan Premier league first leg match played at Mumias Complex on Wednesday afternoon. Allan Wanga’s second half header cancelled Enock Agwanda’s first half goal to give both teams a worthwhile point.AFC Leopards’s Bernand Mang’oli got the first chance of the game but his distant shot was an easy pick for Sony keeper Wilson Obungu. Sony replied with a long throw into the AFC box but Nahimana rose to head the danger out.Mike Baraza then weaved his way into Sony Sugar box but Kilonzo Tumba blocked his final shot for a non-resultant corner.Leopards looked comfortable in the midfield but Sony were utilizing well the chances they got. Enock Agwanda went close with two free headers while Marwa Chamberi was a constant thorn to the Ingwe defense.Ingwe won the first four corners of the game with new boy Idrissa Rajaab sending good balls but Sony did well to maintain the 0-0 scoreline.27 minutes into the match Sony's Francis Ocholla tried a long range shot that veered off target giving no much worry to keeper Barnabas Tiema who was called into duty with the absence of the sick Patrick Matasi.AFC Leopard’s Misse Mwangi tried his luck with a long range shot but couldn’t find the target.Five minutes to the interval Sony were on the offensive. Marwa Chamberi’s headed pass found Enock Agwanda who controlled the ball well before unleashing his shot that went inside the net for the opener. Sony led 1-0 at the half time break.At the beginning of the second period, AFC Coach Jans Koops brought in Jimmy Bageya for Edwin Seda while Zico opted for Silas Shitote in place of first goal provider Marwa Chamberi.AFC defender Eric Masika had the first chance of the second period with a header that went wide.Allan Wanga got the equalizer in the 56th minute with a crisp header from a free kick. Koops immediately introduced Charles Okwemba for Abbas Kiwalabye in a bid to boost the attack.In the 67th minute Jimmy Bageya made a brilliant solo run and effort that that was deflected for a corner .The Ugandan was it again a minute later but his final pass to Allan Wanga was intercepted.Sony substitute Vincent Ogutu played selfishly when he opted for a shot instead of a pass with quarter of an hour to go. As the clock ticked, Allan Wanga’s tried another header that went wide before coach Zico threw in his last dice by bringing in Ismael Dunga for Francis Ocholla.Jimmy Bageya then made a good run and shot that Wanga did not manage to connect to. Sony’s new substitute Ismael Dunga also added some spice to the Sony attacking force as they also had decent runs in the final minutes of the game. Okwemba wasted the final chance of the game to end the match on shared spoils.Leopards could not manage to leap frog Tusker to second position and they stick to third.“It was important that we did not lose today. We played really well especially in the second half when my players’ morale got a little bit higher than the first half,” AFC Leopards Coach Jan Koops said after the match.His opposite number Zedekiah Otieno was as grateful for the lone point;“Playing away from home is never easy and when you get a point it is always better than none. I am happy with my players and happy with the point,” Zico says.Leopards next face League leaders Sofapaka on Wednesday while Sony will be travelling to Nairobi for a match against Bankers KCB.

AFC Leopards and SoNy Sugar closed the first leg campaigns on a fair note settling for a one all draw with millers SoNy Sugar at the Mumias Sports Complex Wednesday 20 June 2012.

The match was more of a balanced affair as SoNy gave as much as they received from high flying Ingwe through the match.

AFC Leopards caused an early scare in the match with the day’s captain Mike Baraza weaving through the Millers’ defence in the 4th minute only to have his shot blocked by Oburu.

SoNy however bounced back proving more dangerous in attacks as Francis Ocholla and Enock Agwanda combined well with the former missing two headers in the 6th and 14th minute.

Wanga also missed a clear header in the 11th minute with Wilson Oburu standing firmly on his way to deny Ingwe the early lead.

SoNy however took the driving seat in the 40th minute after an Enock Agwanda left foot drive that left Barbanus Tiema for dead from a Marwa Chamberi cross.

AFC bounced back pushing the Millers into their own half and forcing them to concede consecutive corners and fouls in the process.

The second half witnessed various changes for both sides as both coaches made relevant changes to their squads.

AFC brought in Jimmy Bageya for Ezekiel Seda while SoNy countered the move bringing in a defender Cyrus Shitote for Marwa Chamberi.

This proved fruitful for the hosts as they pushed the ball into SoNy’s defence with Bageya dancing his way from the left flank.

Ingwe maintained their attacks with Allan Wanga leveling the scores in the 56th minute through a header after a superb cross from Misses Mwangi.

Bageya continued to irritate the SoNy defence into the dying minutes of the match but the going was made hard by SoNy defender who defender with their lives.

The draw leaves AFC still in the third position while SoNy are at 12th  on the standings. 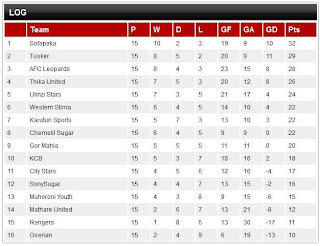