Dennis Machio of MichezoAfrika wrote:-
AFC Leopards’ striker Victor Ochieng pounced on a loose ball in the danger area to sting Karuturi with a last minute goal that ensured AFC Leopards (40) flashed with supremacy at the helm of the KPL table moving four points clear off second placed Tusker (36).

Both teams had played cautiously throughout the match with each set having their fair chance of missed chances.

“We outplayed AFC most of the time and I am disappointed to have come out empty handed. But it was a good match and in soccer you have to accept defeat, we tripped in concentration before the match was over and that was it.’’ Karuturi coach Michael Nam speaking after the match.

In the 89th minute when all looked like it was headed for a barren draw,  Karuturi Keeper Michael Wanyika punched a shot on target back  into play but Titus Wamalwa made a faulty clearance that landed on Victor Ochieng’s path and the striker did not disappoint as he quickly reacted to strike with a powerful drive before Wanyika could recover.

“This was a very hard match but we thank God for the crucial win. Karuturi staged a very strong resistance but football is a 90 minutes game and Victor scored a brilliant goal that made the difference.”

Futaa had a match commentary link:-

AFC sub; Victor Ochieng' in, Jimmy Bagaye out
57'Masika making great tackles to live-up the game..but generally it's a dull tussle
53'Leopards gets a free-kick
52'

Leopards squanders a corner
50'Wanyika makes a great save, denying Wanga an opener
46'AFC sub; Samuel Mwangi in for Edwin Wafula
46'second half underway
45'AFC-Karuturi 0-0
45'Half time at Mumias Sports Complex.
40'Imbalambala executes a hard shot but Michael Wanyika saves it
32'Wanga fouled at the edge of the box. Idrissa takes it but its too high for Imbalambala
25'

Mustapha Ogutu booked for mouthing-off the referee
21'The flower-men really trying but cannot penetrate through Leoaprds' defense. still 0-0
20'Tiema makes a five save at the edge of the box. Slow game with low attendance
15'Jimmy Bageya misses a clear chance to put Leopards on the lead
3'AFC Leopards Vs Karuturi Sports on

Futaa then followed with a report by Rodgers Eshitemi

AFC Leopards SC required a late-gasp strike to extend their lead in the Kenyan Premier League after beating a stubborn Karuturi Sports FC 1-0, on Saturday 21 July, at Mumias Sports Complex.

The match started on a low tempo with both sides sitting back with less raids in the first half.

It wasn’t an exciting game by any means but it is Victor Ochieng’s 87th minute strike from a rapid counter-attack that made the difference.

Jimmy Bageya could have put Leopards on the lead in the sixth minute but squandered the chance before Barnabas Tiema made a fine save, resulting into a fruitless corner.

On resumption, Kennedy Oduor kept Leopards' back-line on toes but it was Eric Masika's tactics and tackles that saved Ingwe.

In the 73rd minute, Oduor found himself alone in the midfield, raced through the defense and released  a perfect shot that made Tiema to over-stretch and fluffed the ball out into a fruitless corner.

Following the win, Leopards are now four points ahead of second placed Tusker FC, while Karuturi are eighth with 25 points.

AFC Leopards went four points clear at the top of the Kenyan Premier League after a late strike from Victor Ochieng’ secured a 1-0 win over Karuturi Sports on Saturday at Mumias Sports Complex.

The dull clash appeared to be heading towards a goalless draw before second half substitute Ochieng – who had replaced Jimmy Bageya in the 71st minute – scored the decisive goal in the match in the 88th minute.

Bageya could have put Ingwe in the driving seat early in the first-half but missed a glorious opportunity before the flowermen took the ball into Leopards’ half and forced goalkeeper Barnabas Tiema to a huge save.

A few minutes after the break, Allan Wanga rose high to connect with Idrissa Rajab’s free-kick, forcing Karuturi’s shot-stopper Michael Wanyika to make a superb save.

In the 74th minute Leopards’ fans breathed a sigh of relief after lanky midfielder Kennedy Oduor danced through the defence only for Tiema to parry his shot out for a corner.

Victor Ochieng’ pounced on a loose ball in the box to fire in a last minute goal for Leopards to overcome a plucky Karuturi Sports at Mumias.

It was the second match in a row that Leopards took an unconvincing sole goal victory. A controversial penalty gave them victory of Nairobi City Stars last time out but they still maintain their position at the top of the table on 40 points from 19 matches, four ahead of No. 2 Tusker who have a match because of their absence while taking part in the Cecafa Kagame Club Cup tournament in Tanzania.

AFC Leopards lived it late to see off a stubborn Karuturi 1-0 in a KPL match played at the Mumias Sports Complex. With Paul Were out, Leopards drafted Armon Muchiri into the squad.

Generally a dull match by any standards, both sides never sparked and this suited well the Naivasha based side.

The first chance of the game came in the 6th minute courtesy of Ugandan import Jimmy Bageya but he squandered a chance to put Leopards 1-0 up. On form Keeper Barnabas Tiema was called into action minutes later when he was forced to parry away a Kennedy Oduor’s effort.

The second half began just as the first and it was Leopards who did get the first chance through captain Martin Imbalambala but he also squandered the chance to give Ingwe the lead.
Impatient Leopard’s fans in the stadium started singing the ‘Mungu saidia rhythm’ while some in social networks expressed their disappointment but all this was thwarted when Victor ‘Aguerro’ Ochieng’ volleyed home past Noah Ayuko to send the travelling party in frenzy with the Isokonde dance. Leopards extend their lead to 40 points and are four points clear. 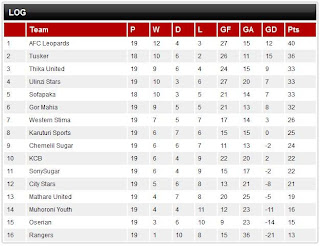