AFC Leopards bounced back to winning ways with  a 2-1 victory over Muhoroni Youth at the Afraha Stadium in Nakuru. Jonas Nahimana and Allan Wanga scored a goal apiece in the first half with Elly Otuoma grabbing a consolation for the sugar belt side in the second half.


AFC Leopards looked a brighter side from the early minutes of the match as they knew the importance of tehe three points to their title ambitions. The Leopards camped in Muhoroni’s half winning corner after corner. Mike Barasa had a decent chance in the 20th minute when he headed a cross from Allan Wanga but the Muhoroni keeper Joseck Gathongo had the ball safely in his arms.

AFC Leopards would be rewarded just three minutes later with Jonas Nahimana making amends to his  blunder that cost Leopards against Gor, heading in at the far right from Mike Barasa’s assist from a short corner.

The goal added more energy in the AFC Leopards’ reserves as they increased the intensity of their attacks. Mike Barasa had a shot from his right foot go wide after a good looped ball from Martin Imbalambala. Muhoroni seemed to get into the game gradually and they threatened from time to time though they did not do much to trouble Patrick Matasi at Ingwe’s goal.

AFC Leopards added their second four minutes to the break through Wanga who lifted the ball over Joseck Gathongo after a good ball from Charles Okwemba.

Muhoroni almost grabbed one back in the last minute of added time but Edwin Baraza cleared the ball off the line from Abbey Kynkurunmi’s header.

In the second half, Muhoroni came alive and they sought to write off their two goal disadvantage. The Nigerian Abbey had the most of the chances, losing a lob over Matasi in the 51st minute, with the effort going wide.

They would nonetheless get one back through substitute Elly Otuoma who shot from distance catching keeper Matasi off his mark after a lay off from Abbey. The Nigerian also had his chance four minutes later heading wide alone after a cross from a cross on the left.

In the 73rd minute, Abbey again missed a chance at the far end from a Harry gentle’s long throw.

The win pushes Leopards to second place on 48 points, two above Gor Mahia who play Rangers on Wednesday.

AFC Leopards got back to winning ways after the side saw off host Muhoroni Youth 1-2 in a game played at the Afraha Stadium on Sunday 30 September 2012.

Leopards carried a 0-2 lead to the break but were given no further room in the second half to top up on the score as Muhoroni attempted to claw back into the game but only managed a consolation at the hour mark.

Off of a corner, defender Jonas Nahimana poked home the first for Leopards in the 23rd minute before Allan Wanga doubled the score with three minutes to the break with a screamer off a Mike Baraza cross.


Elly Otuoma’s shot went in at the hour mark off a deflection for Muhoroni’s lone goal on 60 minutes.

With the win, ingwe leap frogs Gor Mahia to land second in the 16-team log with 48 points as Muhoroni Youth remains 13th with 26 points. Both have played 26 matches with four to go to the close of the season.


In the 1500hrs kick off, Leopards got ten corners against Muhoroni’s two, with their first goal coming off the sixth.

A rampant Leopard who pinned Muhoroni for better spells of the first half struck the upright twice; in the eight minutes through Paul Were.

Mike Baraza too had his chance bounce off soon after Wanga’s goal.


Prior to the Sunday triumph, Leopards had gone four straight win games without a win having suffered three losses and picked up a draw.

Muhoroni came to Afraha in the wake of a deserved 3-0 win over Nairobi City Stars in the past weekend.

At Afraha Stadium, a determined AFC Leopards team fighting to stay in the league title hunt launched an onslaught on Muhoroni Youth right after kick off.


The sustained attacks resulted in Jonas Nahimama heading in a cross from Allan Wanga to give Leopards a 23rd minute lead.

Until then Leopards looked dominant. Mike Baraza had a decent chance in the 20th minute when he headed in a cross from Wanga but the Muhoroni ‘keeper Joseck Gathongo saved.
After the opening goal Baraza had a right foot shot just wide after receiving a good ball from Martin Imbalambala.

Four minutes to the half time break Wanga lifted the ball over Gathongo top score after a good ball from Charles Okwemba.

Muhoroni almost pulled one back in the last minute of added time but Edwin Baraza cleared the ball off the line from am Abbey Kynkurunmi’s header.

Muhoroni were never-say-die and fought to get back into the match. Kynkurunmi lobbed over Leopards ‘keeper Patrick Matasi in the 51st minute but the danger went just wide.

Substitute Elly Otuoma would pull back the goal for Muhoroni, leaving Matasi stranded after being put through by Kynkurunmi. 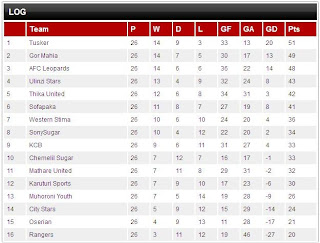